You are here
Home > HEADLINES > Customs distribute 63,000 bags of rice, others to orphanages 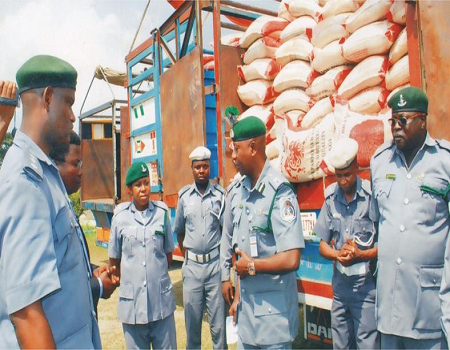 The Nigeria Customs Service (NCS) has so far distributed 63,000 bags of rice, gallons of vegetable oil and clothing to some orphanages and IDPs in the South-West and North-West zones of the country.

The Public Relations Officer, NCS, Mr Joseph Attah, who disclosed this to the News Agency of Nigeria (NAN) in Abuja on Monday, said that some states in the North-Central zone also benefited from the donation.

He explained that more than 32,000 bags of rice were earlier distributed in the customs’ Zone A, South-West zone recently.

Attah said that the committee mandated to distribute the items were currently in Zone B, (North-West and some parts of North-Central to carry out the exercise.

According to him, 30,000 bags of rice will be distributed in Zone B.

He said that the beneficiary orphanages and Internally Displaced Persons (IDPs) were well screened to ensure they were genuine.

Attah explained that for any orphanage to benefit in the disbursement it must produce a certificate of registration by Corporate Affairs Commission (CAC).

The spokesperson listed Sokoto, Kebbi, Zamfara and Kaduna states as among those that have benefited in the ongoing distribution of the items.

He said that in Kaduna state, the headquarters of Zone B in the North-West, items like rice, sugar, spaghetti, vegetable oil and mosquito coils were distributed.

The spokesman said that Katsina and Kano states in the North-West region were yet to benefit as the committee would visit these states this week and next week to screen beneficiaries then distribute the items.

Attah disclosed that about 4,000 bags of rice and used clothing were also distributed to orphanages and IDPs in the Federal Capital Territory (FCT).

“North-East has been the major beneficiary, we started from there because they need those items most due to the insurgency that had ravaged the region.

“After that, the Federal Government took the decision to extend that gesture to other parts of the country,” he said.

The post Customs distribute 63,000 bags of rice, others to orphanages appeared first on Tribune Online.