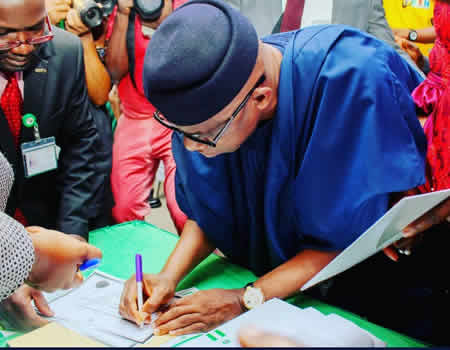 The Ogun State Governor-elect, Prince Adedapo Abiodun, has received Certificate of Return from the Independent National Electoral Commission (INEC), having being duly elected in the March 9, 2019 governorship election.
The certificate was presented to him by the Resident Electoral Commissioner in the state, Professor Abdulganiy Olayinka at the Media Center of the Commission at Magbon area of Abeokuta, on Thursday.
Abiodun’s deputy governor-elect, Engr (Mrs) Nimot Salako-Oyedele, had earlier been presented with her certificate during a brief ceremony witnessed by stalwarts and members of the All Progressives Congress (APC)  in the state.
The governor-elect in his short remarks titled “A victory for the good people of Ogun State”, promised a fair, just and equitable administration, describing electorate in the state as heroes and heroines of the election.

He explained that the tasks before his government are undaunting considering the resources of the state, but assured the people of his readiness with their support to deliver on his promises.
He appreciated his co-contestants, especially the major ones for demonstrating the spirit of sportsmanship and promised to extend hands of fellowship to them.
Abiodun said, “I solemnly pledge that our administration will be fair, just, equitable and inclusive, a government that truly earns and deserves confidence and trust of the citizenry through transparent and accountable leadership, focused and qualitative governance that creates the enabling environment for an enduring economic development and individual prosperity of the people of Ogun State. Indeed,  a government for all not a few.”