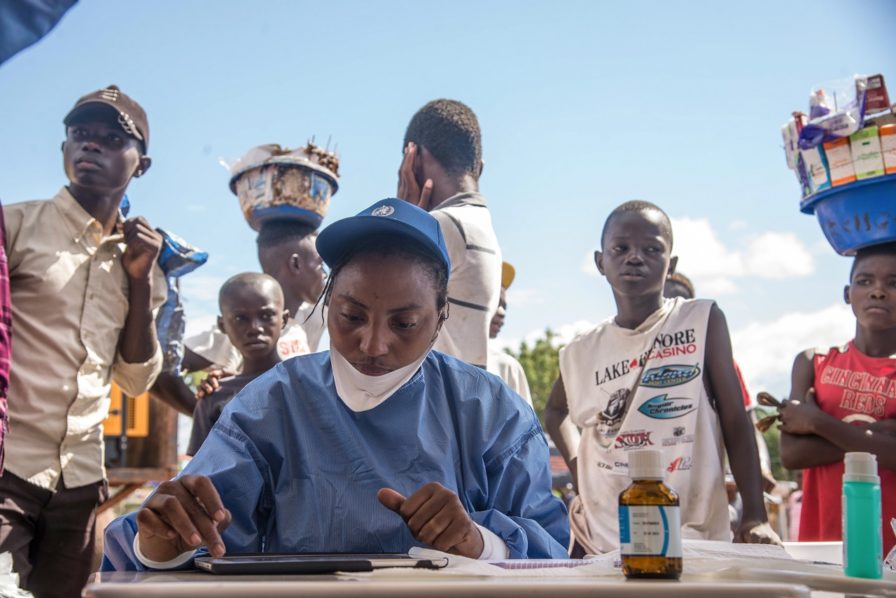 Nurses working with the World Health Organization (WHO) prepare to administer vaccines at the town all of Mbandaka on May 21, 2018 during the launch of the Ebola vaccination campaign. The death toll in an outbreak of Ebola in the Democratic Republic of Congo (DRC) rose to 26 on May 21, 2018, after a person died in the northwest city of Mbandaka, the government said, as it began vaccinating first responders against the dreaded disease. / AFP PHOTO / JUNIOR KANNAH

The death toll from Ebola in the Democratic Republic of Congo (DRC) has risen to 27, the health ministry said on Tuesday, after a fatality was recorded in a city on the front line of the outbreak.

The death, which involved a person confirmed by lab tests as having the viral disease, occurred in Wangata, a district of Mbandaka, the ministry said in a press release.

So far, there have been 51 cases since the outbreak was declared on May 8, it said. Of these, 28 cases have been confirmed, 21 are probable and two are suspected.

One of the world’s most notorious diseases, Ebola is a virus-caused haemorrhagic fever that in extreme cases leads to fatal bleeding from internal organs, the mouth, eyes or ears.

The outbreak began in rural northwestern DRC in a remote location called Bikoro, about 150 kilometres (90 miles) away.

Last Thursday, a first case was reported in Mbandaka, an event that triggered international concern.

The city of around 1.2 million people, lies on the Congo River, where it is a transport hub to Brazzaville and Kinshasa downstream and to Bangui, upstream.

The health authorities on Monday began administering a prototype vaccine to a small number of health workers in Mbandaka, as part of the campaign to contain and roll back the disease.

The immunisation team will follow suit on Saturday in Bikoro, vaccinating more than 600 people in all for the first phase of the operation.

The outbreak is the ninth in the DRC since the disease was first identified in 1976. It was named after a Congolese river where the first cases were recorded. The last outbreak was in 2017, and was rapidly curtailed with four deaths.