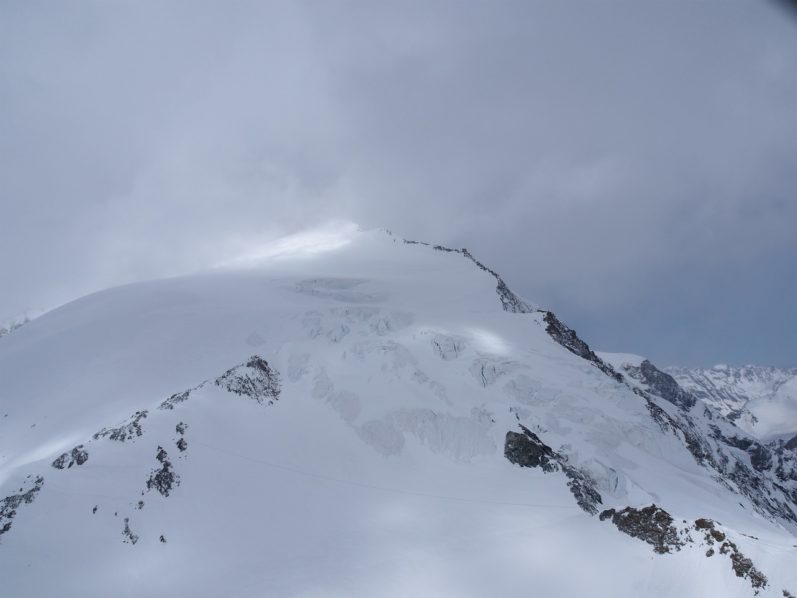 This handout picture taken and released on April 30, 2018 by Swiss Police of Canton of Valais shows the Pigne d’Arolla area, where four skiers lost their lives and five others were in a critical state, after being forced to spend the night exposed to the elements in the Swiss Alps. Bad weather in the Pigne d’Arolla area of the Swiss Alps on April 29 caught a group 14 skiers by surprise, police in Valais canton said in a statement. / AFP PHOTO / POLICE CANTONALE VALAISANNE / HANDOUT /

A sixth person has died after a group of 14 skiers were caught up in a storm, police said Tuesday, after the bodies of two climbers were also found elsewhere in the Swiss Alps.

Late Tuesday morning, “a sixth person died. The deceased was a 52-year-old Bulgarian woman,” police in Valais canton said in a statement.

Bad weather in the Pigne d’Arolla area of the Swiss Alps on Sunday had caught the group of skiers by surprise.

The group had set out from the Dix rest-stop and had intended to make it to Vignettes to sleep, trekking along a route called The Serpentine.

The manager of a rest-stop in the remote mountain region sent out a call for help at dawn on Monday, triggering a major relief operation that involved seven helicopters, police said.

One person, a 59-year-old Italian national who was serving as a guide for the group, was found dead on the scene following a fall, police said.

Three more people, a 72-year-old Swiss man, a 56-year-old Frenchwoman and a 43-year-old Italian woman, remained in serious condition, police said, adding that one of the cases was considered life-threatening.

Others in the group were merely suffering from “mild hypothermia”.

All the families had been informed of the tragedy, police said.

Frenchmen hit by avalanche
In a separate statement Monday, police in Bern canton said the bodies of two climbers, aged 21 and 22, were found further east in the Alps, after the alert was sounded late Sunday but the bad weather foiled rescue efforts.

Two French nationals cross country skiing near the Allalin glacier in Valais canton were also swept away by an avalanche Monday, police there said Tuesday, adding that one of them had died.

The two, a man and a woman both aged 49, had set off from Saas-Fee and had begun the climb between the glacier and the Feejoch peak, which towers 3,630 metres (11,900 feet) above sea level, when they were swept away by a sheet of snow.

The woman managed to dig herself out and call for help.

Rescue workers who rushed to the scene were able to dig out the man, who was flown by helicopter to a hospital in Bern, where he died Monday evening.

The woman, who was flown to a hospital in Valais, was injured, but her life was not in danger, police said.