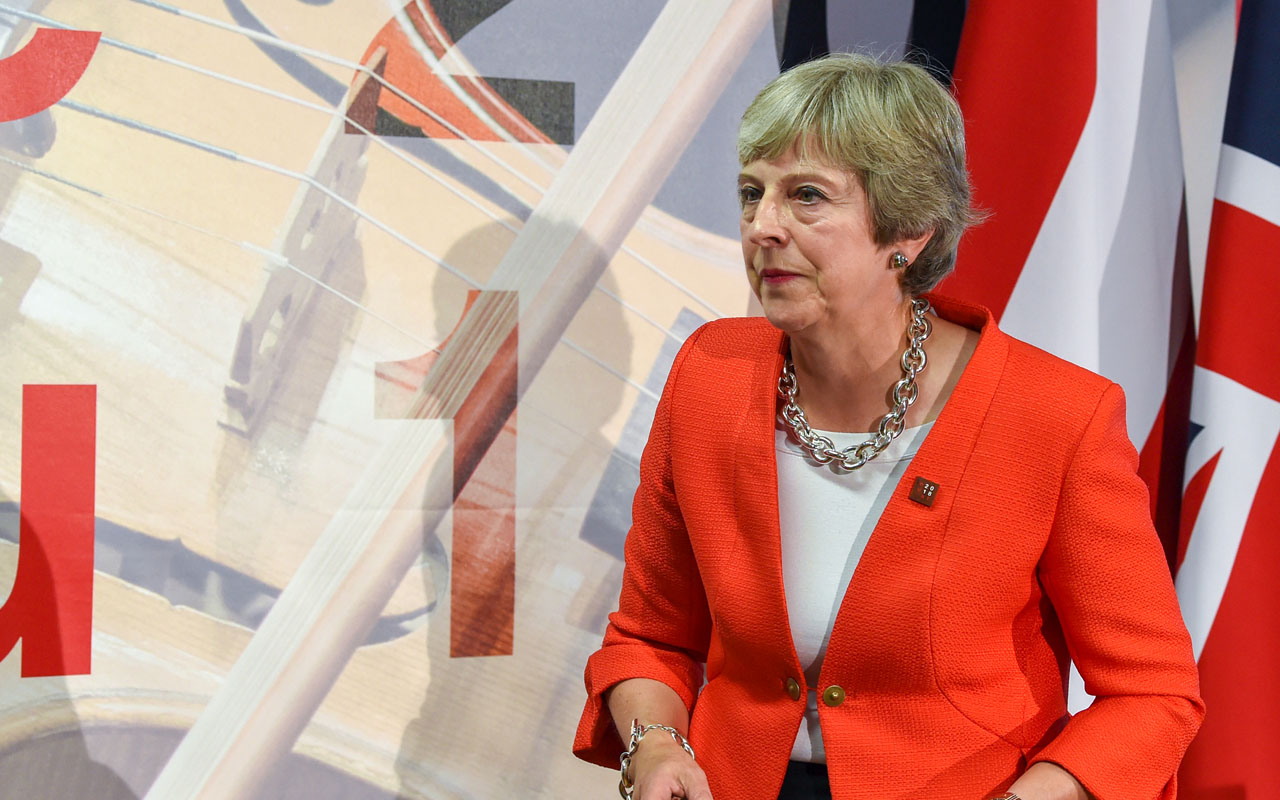 Britain’s Prime Minister Theresa May leaves after a press conference at the end of the EU Informal Summit of Heads of State or Government at the Mozarteum University in Salzburg, Austria, on September 20, 2018. / AFP PHOTO / APA AND AFP PHOTO / Christof STACHE

Prime Minister Theresa May hit back Friday at the European Union after it roundly rejected her Brexit plan, saying its refusal to compromise was “not acceptable” and reiterating the possibility of walking away from the negotiations.

In a defiant televised statement from Downing Street, May said the talks were at an “impasse” just six months before Britain leaves the EU and weeks ahead of a deadline to seal a deal — but put the blame on Brussels.

“Throughout this process, I have treated the EU with nothing but respect. The UK expects the same. A good relationship at the end of this process depends on it,” the prime minister said.

May was speaking after returning from an EU summit in Salzburg Thursday, where her fellow leaders condemned her proposals for post-Brexit trading ties and the Irish border.

It was a setback characterised by the British media as a “humiliation”, just days before a meeting of the ruling Conservative party, where eurosceptics are ramping up the pressure on May to be tough.

Standing at a podium with two British flags behind her, May said: “At this late stage in the negotiations, it is not acceptable to simply reject the other side’s proposals without a detailed explanation and counter proposals.

“So we now need to hear from the EU what the real issues are and what their alternative is so that we can discuss them. Until we do, we cannot make progress.

“In the meantime, we must and will continue the work of preparing ourselves for no deal.”

The British pound, already down Friday against the dollar and the euro, fell more sharply following May’s comments.

Craig Erlam, an analyst at Oanda, said it was a sign that traders believed a no-deal scenario was an “increasingly likely outcome”.

Making a mistake
The EU summit in Salzburg was intended as a staging post in the negotiations, but leaders savaged May’s plan — and demanded she come back with an alternative by an EU summit in mid-October.

To up the pressure, they put on ice a special summit suggested for mid-November to seal a deal, saying it would only happen if there is progress next month.

Before leaving Austria, May gave a feisty press conference, insisting her plan was “the only proposal on the table”.

On Friday, she said the EU’s proposal for Britain to stay in the European Economic Area, effectively the single market without any say in the rules, would “make a mockery” of the 2016 vote to leave the bloc.

Meanwhile its alternative offer of a free trade agreement was contingent on a “backstop” keeping the British province of Northern Ireland aligned with EU rules, “something no British prime minister would ever agree to”.

“If the EU believe I will, they are making a fundamental mistake,” she said.

She repeated that she would bring forward alternative proposals to the backstop.

Constrained by her party
The EU had previously indicated its opposition, but the tough tone at Salzburg surprised many commentators, with some headlines talking of an “ambush”.

“Perhaps a sense was created that Prime Minister May would come away with something more positive than occurred, but I don’t think anyone in the EU or Ireland is to blame for that,” Irish Prime Minister Leo Varadkar said on Friday.

He admitted the two sides were “entering into a rocky patch” but said he was determined to secure a deal.

“We have to be careful, like two hedgehogs who love each other. When two hedgehogs embrace, they have to watch out that they don’t get scratched,” he told the Austrian daily Die Presse.

Simon Usherwood, politics professor at the University of Surrey, told AFP the EU’s “desire to help Theresa May have a bit more space back home (had) collapsed” in Salzburg.

“Yesterday was really about irritation and bad tempers that the UK really hasn’t got the measure of this properly,” Usherwood added.

But he noted that May had little room for manoeuvre at home.

The House of Commons must approve any Brexit deal, and May has only a small majority — which would be undermined if her eurosceptic lawmakers go through with a threat to oppose it.

“Domestically she’s super-constrained by the party. She can’t really be seen to be making concessions,” Usherwood said.