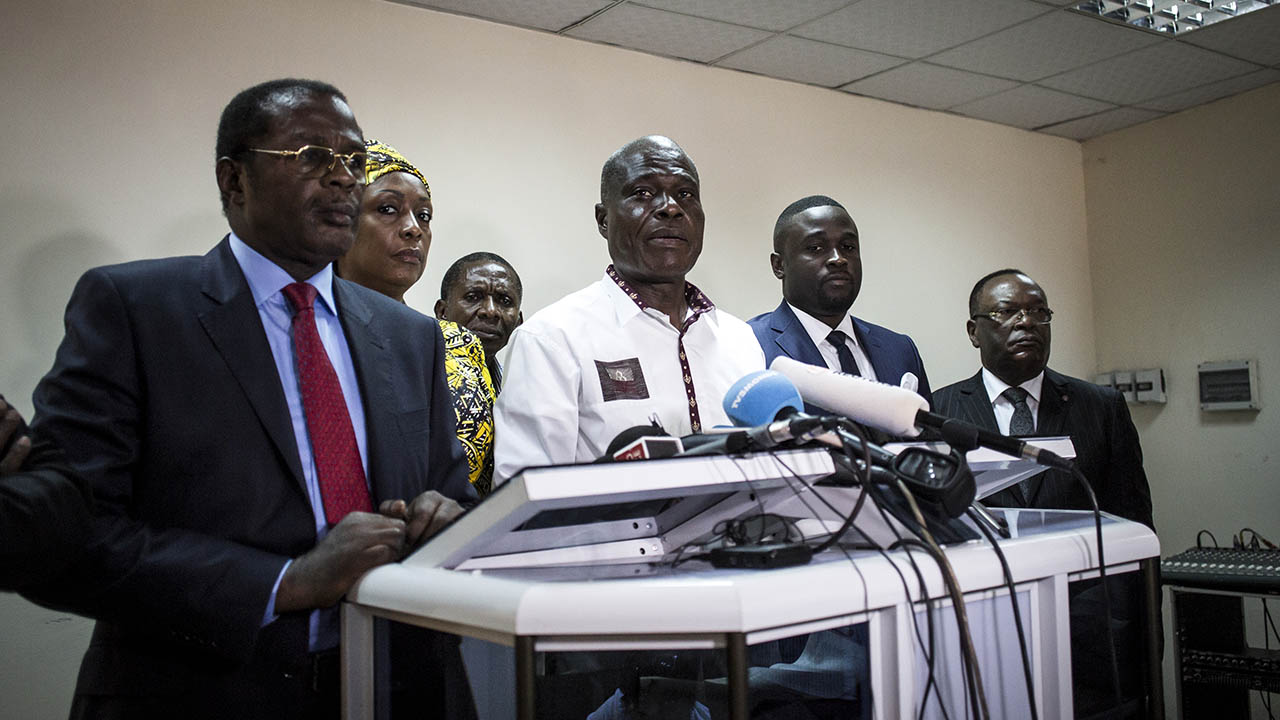 One of the main opposition candidates in the Democratic Republic of the Congo’s presidential elections to be held on December 30, Martin Fayulu (C), addresses the press on December 25, 2018 in Kinshasa. (Photo by JOHN WESSELS / AFP)

DR Congo on Wednesday announced that key elections due to take place nationwide on December 30 would be postponed to March in two regions troubled by violence.

But those delays will not affect the timetable for the presidential ballot, which is being held alongside legislative and provincial elections, the national election commission CENI said.

Already postponed three times, the elections are due to bring the curtain down on the era of President Joseph Kabila, in charge of the vast mineral-rich country for nearly 18 turbulent years.

“The elections in the Beni region and the cities of Beni and Butembo in North Kivu province as well as Yumbi in the (southwest) Mai-Ndombe province initially scheduled for December 30 will now be held in March,” CENI said.

The final results of the presidential vote will be published on January 15, and the next president will be sworn in on January 18, CENI said.

It did not explain how this outcome would dovetail with the vote in the troubled regions, which presumably would take place around two months after the presidential inauguration.

A total of 1,256,117 registered voters in the troubled regions, out of a nationwide electoral roll of 44 million, are affected by the delay.

The elections were due to have been held on December 23, climaxing a long period of blood-stained turbulence.

But CENI ordered a week-long postponement, blaming a warehouse fire that destroyed voting machines and ballot papers earmarked for Kinshasa.

The Democratic Republic of Congo, the second biggest country in Africa, has a long history of political turmoil and violence.

It has never had a peaceful transfer of power since it gained independence from Belgium in 1960.

In 1996-1997 and 1998-2003 it became the theatre of two wars that left millions of dead and homeless and sucked in countries from around central and southern Africa.

Smaller conflicts are unfolding in the east, where swathes of the countryside are in the grip of brutal militias.

The CENI statement pointed in particular to parts of North Kivu province, affected by “a terrorist threat” and “a dangerous, ongoing epidemic of Ebola virus” in the areas of Beni and Butembo.

Since 2014, hundreds of civilians have been killed in attacks attributed to the Allied Democratic Forces (ADF), a shadowy Islamist-rooted group that arose in western Uganda in 1995.

Ebola fears
Since August 1, 354 people have died in an outbreak of Ebola, whose epicentre is the Beni region, according to official figures.

“Elections cause major movements of voters to polling sites, causing the people to gather and mix, which increases the risk of spreading the disease and providing an opportunity for terrorist attacks, ” CENI said.

At the other end of the country, in the southwestern province of Mai-Ndombe province, “deadly incidents” occurred in the territory of Yumbi on the night of December 14-15, it disclosed.

The violence “led to massive displacement of people, the destruction of all electoral equipment and document, (and) the ransacking of CENI warehouses and sites,” it said.

Kabila took office in 2001 at the age of just 29 after succeeding his assassinated father, Laurent-Desire.

His long spell has been sharply criticised by rights and anti-corruption watchdogs, and his final years marked by protests that were bloodily quelled.

He was due to step down at the end of 2016 after reaching the end of his constitution-limited two terms in office.

But he stayed on, invoking a caretaker clause in the constitution that enables a president to stay in office until a successor is elected.

The elections were postponed until the end of 2017 under a deal brokered by the powerful Catholic church — and then again until 2018, when Kabila eventually confirmed he would not run again.