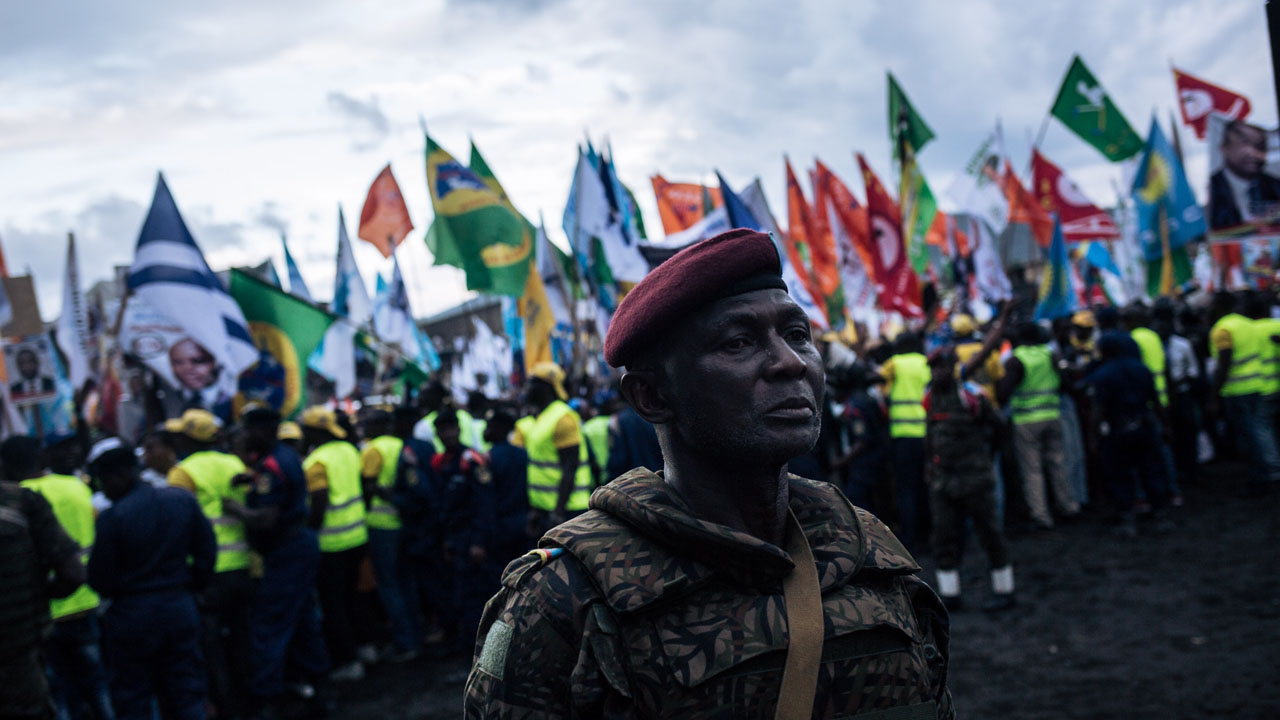 A military officer stands in front of the crowd during the election rally of the presidential candidate Emmanuel Ramazany Shadary in Goma, North-Kivu, on December 16, 2018. – Tensions are rising in the vast, unstable country ahead of the December 23 election when voters will choose a successor to the President who has remained in power as a caretaker leader even though his second and final elected term ended nearly two years ago. (Photo by ALEXIS HUGUET / AFP)

The Democratic Republic of Congo goes to the polls this week in elections which could see the country emerge from 17 years of conflict-ridden rule under controversial President Joseph Kabila.

Twenty-one candidates are running to replace Kabila, whose hand-picked successor Emmanuel Ramazani Shadary is one of the front-runners.

At stake is the political stewardship of a mineral-rich country that has never known a peaceful transition of power since independence from Belgium in 1960.

More than 40 million voters will cast their ballots on Sunday to choose a successor to 47-year-old Kabila, who has ruled the nation since the assassination of his father in 2001.

In a sign of growing international concern about the risk of violence, the United States on Friday ordered its non-essential staff to leave its embassy in the capital Kinshasa.

The electoral campaign period had been mostly peaceful but at least six people were killed last week in clashes at two opposition rallies, with police blamed for much of the violence.

In a joint statement last week, the embassies of the United States, Canada, Britain and Switzerland in Kinshasa said they were deeply concerned by the loss of life.

The UN rights chief also denounced the “excessive use of force” against opposition supporters, urging Kinshasa to ensure the “essential conditions for credible elections” to be fully protected.

‘Cheating machines’
The election is long delayed as Kabila should have stepped down as president at the end of 2016 when he reached a two-term limit.

But he stayed on thanks to a constitutional clause enabling him to remain in office until a poll is held, sparking protests that were bloodily repressed.

The election will use controversial voting terminals — a source of huge contention over the past year — which many opposition figures have denounced as “cheating machines” that could be manipulated to fix the vote.

The terminals include a touch screen for voters to click on their preferred candidate.

The authorities insist the terminals will cut costs, prevent fraud and provide a faster tally of votes across the vast nation.

But a fire at a warehouse in Kinshasa last Wednesday destroyed most of the election materials for the city, including voting terminals, leading to doubts over whether the election could go even ahead.

Nearly 8,000 of some 10,000 voting terminals for Kinshasa were destroyed, according to CENI, the Independent National Election Commission.

‘Opposition-targeted violence’
The two main opposition candidates, Felix Tshisekedi and Martin Fayulu, have suggested the government could have been behind the fire, to use as a pretext to further delay the election.

Fayulu is running as the joint candidate for several opposition parties, while Tshisekedi has taken over from his father as the veteran face of Congo’s mainstream opposition.

Officials from CENI on Sunday said the army and police repelled an attack by a rebel group on a warehouse with voting machines in the troubled eastern Beni province.

Authorities insist the vote will go ahead.

Shadary, the “pro-Kabila” candidate, is a key ally of the president who served as interior minister during violent crackdowns on demonstrators protesting against Kabila staying in power.

He is among the senior DR Congo officials to be blacklisted by the EU in May 2017 for serious human rights violations.

The opposition has claimed that Shadary, if he wins, will only be a figurehead president with Kabila holding onto power behind the scenes.

Blighted by violence, Ebola
The election takes place with the country’s east still blighted by inter-ethnic strife and militia violence, with exhausted residents hoping the vote will offer some kind of respite after years of bloodshed.

One of the armed groups battling for control of the region’s rich mineral resources is the Allied Democratic Forces (ADF), a shadowy militia rooted in Ugandan Islam that has killed hundreds of people since 2014.

Over the past month, at least 48 people in and around the northeastern city of Beni have been killed by suspected ADF milthets, seven of the UN peacekeepers, according to an AFP toll.

The poll is also likely to be hampered by an Ebola outbreak in two eastern provinces, North Kivu and Ituri, that has claimed more than 300 lives since being declared on August 1, health officials say.

A cholera epidemic has also left 857 people dead since the start of the year, the World Health Organization said last month.