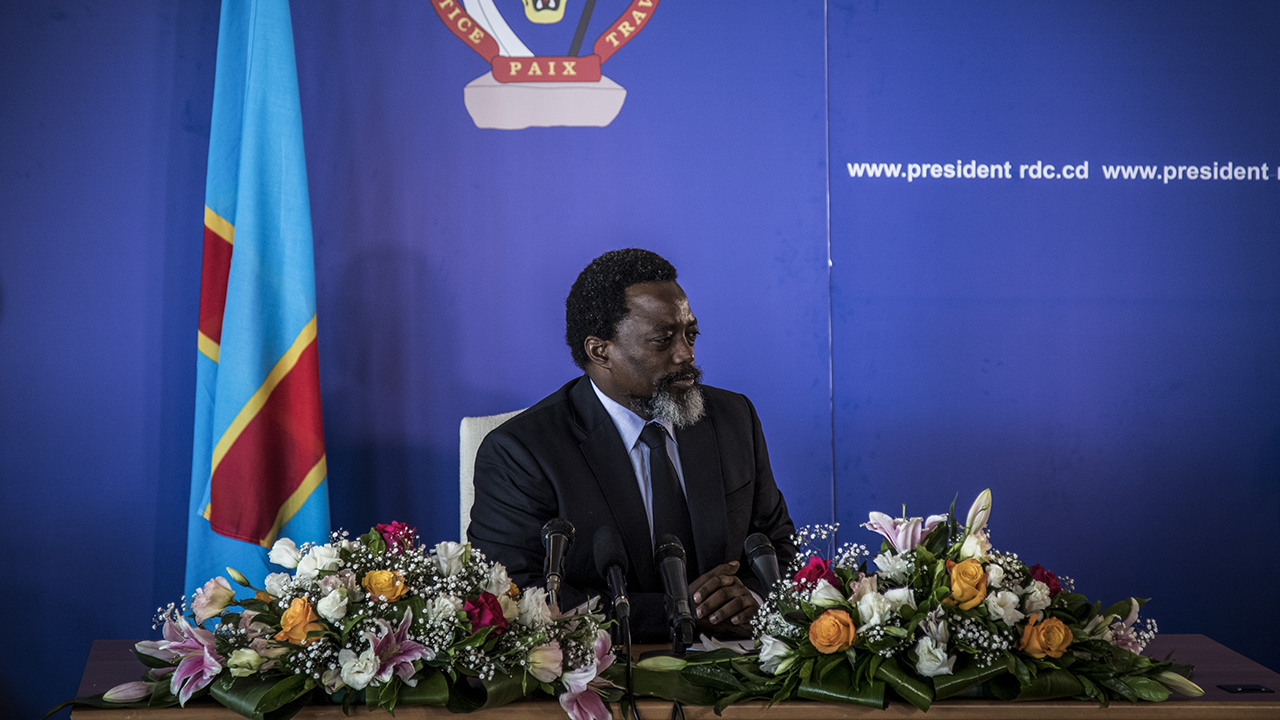 (FILES) In this file photo taken on January 26, 2018 President of the Democratic Republic of Congo, Joseph Kabila, holds a press conference for the first time in five years in Kinshasa.<br />Kabila, 47, has been at the helm since 2001, presiding over a vast mineral-rich country with a reputation for corruption, inequality and unrest. He was scheduled to stand down at the end of 2016 after his second elected term, technically the last permitted under the constitution. Kabila has refused to spell out whether he will seek a new term in the vote. The DRC has never known a peaceful transition of power since it gained independence in 1960 — and some experts fear that the December 23 elections may trigger a bloody conflict.<br />/ AFP PHOTO / THOMAS NICOLON

The announcement came just hours before the deadline for lodging applications for the December 23 election — a vote analysts say is crucial for the country’s future.

Ramazani Shadary, a Kabila loyalist, was among a group of Congolese officials sanctioned by the European Union in 2017 for violations of human rights.

He “will represent our political family in the presidential election,” spokesman Lambert Mende told a press conference. “We will all rally behind him.”

Described in his official biography as “the man you need for difficult times,” Ramazani Shadary was due to lodge his candidacy in person at the electoral commission in Kinshasa on Wednesday.

Kabila, 47, who has been in power for 17 years, should have stepped down at the end of 2016 when he reached a two-term limit.

But, igniting angry demonstrations, he stayed on thanks to a constitutional clause enabling the president to remain in office until a new president is elected.

Opponents staged protests that were bloodily repressed, triggering angry condemnations from the United States and the European Union.

“Kabila not presenting himself as a candidate is a crucial first step,” Ida Sawyer, Central Africa director at Human Rights Watch told AFP.

“Yet we are still very far from a credible electoral process, and a lot can happen between now and December – including potentially more delays.”

The government’s intention to use voting machines has been criticised by the opposition, who claim they are difficult to use and could be hacked.

– ‘No special qualities’ –
Late Tuesday, Kabila held talks with his political allies, who are joined in an electoral platform called the Common Front for Congo (FCC), on picking a candidate who would succeed him.

Their choice was “the conclusion of consultations that the president, the moral authority of the the Common Front for Congo, undertook to find the rare bird,” Mende told journalists.

“Shadary has no special qualities other than absolute loyalty to the current head of state,” an analyst at a political NGO, based in Kinshasa, told AFP on condition of anonymity.

The fate of opposition leader Moise Katumbi who was barred from entering the country last week to lodge his candidacy has caused political friction ahead of the registration deadline.

Katumbi, 53, a wealthy businessman and former governor of the province of Katanga, was unable to cross the border from Zambia where he and his team remain as of Wednesday.

The end of Kabila’s regime is “a decisive step” for the DRC, said Christophe Lutundula, a close ally of Katumbi, adding however: “The road to free, transparent, inclusive and credible elections is long.”

– Corruption, inequality and unrest –
A country of some 80 million people, the Democratic Republic of Congo has never known a peaceful government transition since it gained independence from Belgium in 1960.

Kabila’s tenure over the vast mineral-rich country has been marked by a reputation for corruption, inequality and unrest.

Several provinces are in the grip of armed conflict and according to the UN High commissioner for refugees, more than four million people have had to flee their homes, many to Uganda, Tanzania, Angola and Zambia.

An investigation by a research group at New York University in 2017, All the President’s Wealth, revealed how Kabila and his family own more than 80 companies in the DRC and abroad, either wholly or partially,

“There’s a heightened political awareness and an understanding that the ruling party and Kabila hasn’t brought the kind of change that Congo needs and that Congolese want,” said Stephanie Wolters, Johannesburg-based analyst at ISS Africa.

“It’s essential to have some credible process or the Congo will keep spiralling and none of the important human security issues will be addressed.”

Sixteen candidates so far, including three major opposition figures, have submitted their names to the electoral commission.

Among them are Felix Tshisekedi, 55, leader of Congo’s oldest opposition party UDPS, and Jean-Pierre Bemba, 55, a former warlord recently acquitted by the International Criminal Court of war crimes and crimes against humanity.

The definitive list of candidates is set to be announced on September 19 after each name is validated by CENI.