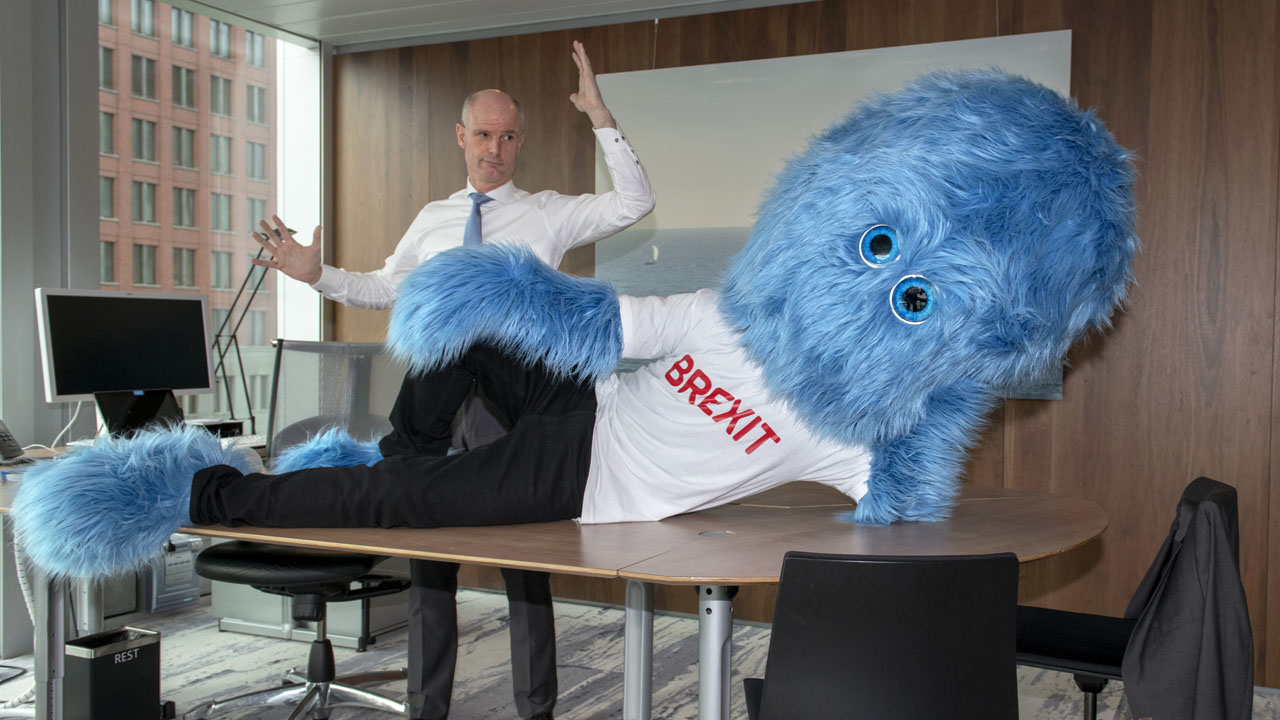 What’s big, blue, furry and monstrous? For the Netherlands the answer is simple: Brexit.

While the British government has had trouble imagining what its exit from the European Union will actually look like, the Dutch government unveiled its vision in the form of a hairy beast.

Dutch Foreign Minister Stef Blok tweeted a picture of himself with the creature, which is wearing a white t-shirt with the word “Brexit” in red letters, lying on his desk and stopping him from working.

“Make sure Brexit doesn’t get — or lie — in your way,” Blok, who has his arms raised in a gesture of mock frustration, said in the tweet.

“It’s a sort of funny way of warning for Brexit, but in a relaxed way,” a Dutch government source told AFP, adding that the creature’s name was “Brexit”.

The government says the idea is to raise awareness among Dutch businesses of the impact of Brexit, especially if Britain crashes out of the EU without a deal on March 29.

A picture on the government’s Brexit awareness website meanwhile appears to show the Brexit muppet as a pest for the “Me Too” era, sitting on a female office worker’s lap and preventing her from reaching her computer.

The same picture features in a full-page advertisement in the Financieele Dagblad newspaper.

The site — www.brexitloket.nl — has a special tool where firms can check for the potential fallout for their business.

Around 1,600 people did a “Brexit scan” on Thursday since Blok’s tweet — more than eight times the average daily number since the site was launched in March 2018, officials said.

‘Waning country’
The monster campaign also took off on social media, including with Dutch Deputy Prime Minister Hugo de Jonge, who tweeted to Blok: “Stef? Give us a little sign of life so we know it ended OK! (Which of our colleagues is in that suit anyway?)”

The furry mascot is, meanwhile, set to feature in other online spots “literally getting in the way of business” by blocking trucks and conveyor belts, the government has said.

Television adverts of the big blue Brexit causing chaos are being filmed but will only be shown on Dutch TV in case there is a no-deal Brexit, sources said.

The humourous Dutch take on Brexit belies the fact that the Netherlands is taking the issue very seriously.

The country has made major preparations to deal with the impact on its economy, which is closely linked with Britain.

Dutch Prime Minister Mark Rutte said in an interview published in the Financial Times on Thursday that around 250 businesses were close to a decision to move to the Netherlands from a “diminished” Britain because of Brexit.

Rutte also rounded on Britain as a “waning country compared to two or three years ago” in a separate interview with Spain’s El Pais newspaper.

“It is going to become an economy of intermediate size somewhere in the Atlantic Ocean,” said Rutte.

The strong comments came as a surprise as he has long been seen as an ally of Britain and was one of British Prime Minister Theresa May’s first ports of call when trying to negotiate a Brexit deal.

The Dutch cabinet has meanwhile been granted emergency powers to deal with the impact and has set aside 100 million euros (US$114 million) for preparations, including the appointment of 900 new customs officers.