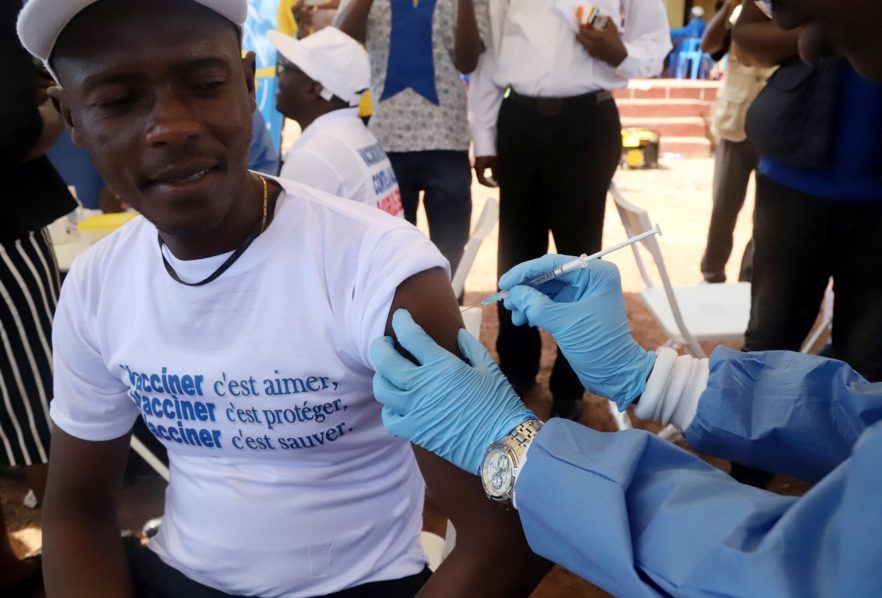 A World Health Organization (WHO) worker administers a vaccination during the launch of a campaign aimed at beating an outbreak of Ebola in the port city of Mbandaka, Democratic Republic of Congo May 21, 2018. REUTERS/Kenny Katombe

The death toll in an outbreak of Ebola in the Democratic Republic of Congo (DRC) rose to 26 on Monday after a person died in the northwest city of Mbandaka, the government said, as it began vaccinating first responders against the dreaded disease.

“A death was recorded (on Sunday), while two people who had been confirmed as ill with the Ebola virus were cured on Saturday,” Health Minister Oly Ilunga said.

The two cases occurred at Bikoro, a remote area where the outbreak began and then spread to Mbandaka — an event that has deeply worried health experts.

Since the outbreak was announced on May 8, there have been 49 cases, comprising 22 confirmed by laboratory tests, 21 probable and six suspected, Ilunga said. Three new cases had been reported on Saturday.

The authorities meanwhile launched a programme in Mbandaka to immunise front-line health workers with an experimental Ebola vaccine.

First to receive the jab was Guillaume Ngoie Mwamba, in charge of the vaccination programme, reporters saw.

The immunisation team will follow suit on Saturday in Bikoro, about 150 kilometres (90 miles) away — vaccinating more than 600 people in all for the first phase of the operation.

“This vaccine is here to block the spread of the disease,” Ilunga said.

Tests of the prototype carried out in Guinea — one of three West African countries hit by Ebola from 2013-15 — show that “all people who received the vaccine during the (virus’s) incubation period did not develop the disease,” he said.

However, he added, “It won’t be a vaccination for mass use, because it first and foremost focuses on health workers. The second circle of vaccination will comprise people who have been in contact with patients, and contacts of contacts.”

Donors have promised 300,000 doses of the vaccine, of which around 8,500 have already been received, Ngoie said.

The World Health Organization (WHO) has dispatched 35 immunisation experts, including 16 mobilised during the last deadly outbreak in West Africa which occurred in 2013. The rest of the team is made up of newly trained Congolese staff.

Deadly
One of the world’s most notorious diseases, Ebola is a virus-caused haemorrhagic fever that in extreme cases leads to fatal bleeding from internal organs, the mouth, eyes or ears.

It has a natural reservoir in a species of tropical African fruit bats, from which it is believed to leap to humans who kill the animals for food.

Transmission among humans then typically spreads through close contact with the blood, body fluids, secretions or organs of someone who is sick with Ebola or has recently died.

The average fatality rate is around 50 percent, varying from 25 percent to 90 percent, according to the WHO.

As there is no licensed drug to treat or prevent the disease, doctors use time-honoured methods of ring-fencing its spread — identifying and isolating patients and tracing people who have been in contact with them.

The job, which requires strict safety protocols, is exhausting and requires mustering large numbers of personnel. The task is greatly complicated when the disease spreads to a city.

City worries
For that reason, alarm bells sounded on Thursday when a first case was reported in Mbandaka,home to around 1.2 million people along the Congo River.

The experimental vaccine, rVSV-ZEBOV, is a single-dose injection developed by pharma giant Merck and funded by the WHO.

Clinical trials involving 16,000 volunteers in Africa, Europe and the United States have indicated it may be 100 percent effective, according to preliminary data.

However, experts stress that it has not been tested in the height of an epidemic and at this point can be considered only as an additional tool in fighting the disease.

In addition, the vaccine has to be stored at extremely low temperatures. Keeping it stable is a challenge in poor tropical countries where there are power shortages.

The outbreak is the ninth in DR Congo since the disease was first identified in 1976. It was named after a Congolese river where the first cases were recorded.

The last outbreak was in 2017, and was rapidly curtailed with four deaths.