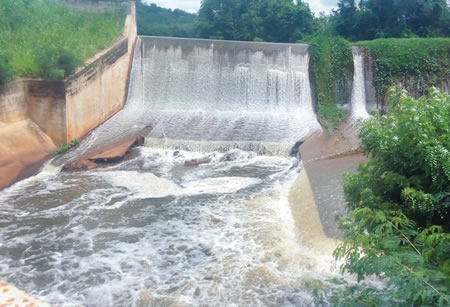 Aside the Asejire Dam sited off the Ibadan-Ife expressway, Eleyele Dam is another reservoir which pumps potable water to the people of Ibadan metropolis and its environs. It is dated back to the 1970s when public water was in the front burner of government’s priorities, a contrast to what obtains today when almost every home relies on self-help through well water or borehole options.

Nigerian Tribune gathered that till date, Eleyele Dam still serves its purpose while also supplying water to the University of Ibadan and other institutions. The dam has since served additional purpose, which has been discovered as a big relief to the residents of some suburbs of Ibadan including Awotan, Apete, Obado, Idi Osan, AlajutaIdunnu and Alakuta Idi Mango.

The dam is a link between those communities located in the northern part of Ibadan metropolis and the main town using flying boat as a mode of transportation. A marine company known as Kosoko Marine and Tourism Centre, managed by Muhammed Balogun, has the franchise to operate boat services at the dam.

A boat carries 15 passengers on a trip. For instance, from Temidire Market at Eleyele end of the water, a passenger is charged a sum of N30 and N50 respectively according to destination.

It is usually a five to 10 minutes cruise from a bank of the dam to the other side, thereby saving time the residents would have spent in accessing their destinations by road transport through Eleyele-Ijokodo route which is said to also come with pains of bad road, especially in Apete axis.

A resident of Apete, Mrs Deborah Joel, 57, told Nigerian Tribune that Eleyele Dam had eased transportation problem hitherto encountered by the communities, just as she applauded the Oyo State government for granting the boat operators license to provide relief for residents.

“It also saves us the stress to struggle for commuter buses and the headache of bad roads. It is a pleasure ride, which I particularly enjoy as one who was brought up at waterside before I relocated to Ibadan after marriage,” she said in a tone of satisfaction.

However, the wild invasion of some parts of the water by hyacinth may soon constitute a clog in the wheel of the boat operators and consequently returning the residents to the road.

Nigerian Tribune findings reveal that the hyacinth is growing uncontrollably, especially at the right side of the dam from Temidire Market end, giving the boat service operators a reason to worry. Muhammed Balogun, therefore, made an appeal to the Oyo State government to come to the aid of the users of the water in clearing the hyacinth before it makes the water impassable.

He said though his boats were currently not feeling the heat, he noted that a stich in time saves nine. Adding, he emphasised that his call was more of preventive measure than raising the alarm, saying that one day the water users would find the whole water covered by hyacinth. Already, he stated, the passengers were used to commuting by boat because of its advantages on their finance and well-being.

“But if the water cannot be used again to access their homes, it is like taking them back to square one. There is no way it won’t also affect our company considering what we have invested in the operation. What you see here today was not achieved on a platter of gold. But we have every cause to be thankful for giving us the patience to survive the challenge,” he recalled.

Aside the hyacinth, Muhammad also said the dam needs to be dredged by the government to make fishing easier, revealing that fishermen are facing challenges to record expected catch. He added that the standard practice was to remove obstructive materials from underwater to make the place more habitable for the fish.

A fisherman, who claimed to have operated in the dam for the past seven years, corroborated Muhammed’s claims, joining him to call on the government to bring a dredge to the dam with a view to making fishing easy for him and his colleagues. The man who simply identified himself as Sunday assured that if the dredging was carried out, Eleyele Dam had the capacity to feed the whole of Ibadan with enough fish.

“I know what I am talking about. I don’t know any other job apart from fishing. This dam can conveniently feed the whole of Ibadan. But government should first do what is right which is dredging of the water. The dam is another source of revenue if it is given attention. We are doing our business gradually without complaint. What I am saying is to let government see that they can make more money here,” he said.

Balogun also dwelt on other windows of benefits for the government, which, according to him, including tourism potential. He revealed that apart from its regular transportation of passengers, his company also hosts picnics and other relaxation events for interested public.

“Although we do this on a small scale because of the state of the site of operation, the experience so far has shown that tourism can be promoted here. Social events such as birthday in particular are hosted here, which means if the whole place is cleared and upgraded, it is going to be nice,” he proposed.