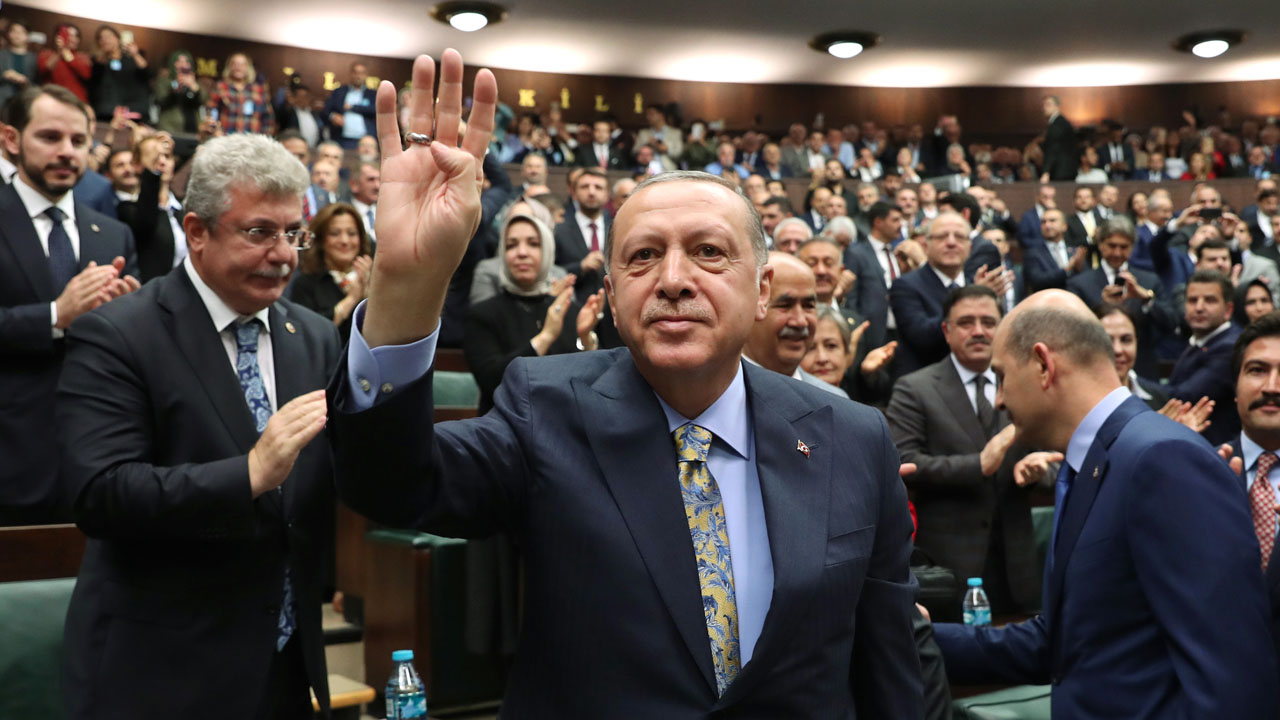 This handout photo released by Turkish President Office shows Turkish President and leader of Turkey’s ruling Justice and Development (AK) Party Recep Tayyip Erdogan (C) is applauded after delivering his speech during his party’s parliamentary group meeting at the Grand National Assembly of Turkey in Ankara, on October 23, 2018. – Turkish President Recep Tayyip Erdogan called for 18 Saudi suspects in the murder of journalist Jamal Khashoggi to stand trial in Istanbul, saying all those involved had to face punishment. (Photo by KAYHAN OZER and HO / TURKISH PRESIDENT OFFICE / AFP) /

Turkish President Recep Tayyip Erdogan on Tuesday called for the trial in Istanbul of the Saudi suspects in the murder of journalist Jamal Khashoggi, a crime that he said was intricately planned days in advance.

Erdogan had promised that his speech in Ankara would give the “naked truth” about the killing and he gave a host of new details while still saying Turkey wanted answers to key questions, including who gave the orders.

Hours before Erdogan delivered his speech to ruling party lawmakers, a major Saudi investment forum opened in Riyadh under the heavy shadow of the murder after key delegates pulled out.

The murder of the Washington Post contributor has damaged the international reputation of Saudi Crown Prince Mohammed bin Salman who has spearheaded a reform drive in the kingdom.

“My demand is that 18 people be tried in Istanbul,” Erdogan said in a speech to ruling party lawmakers in Ankara, referring to 18 people including security officials who have already been detained by Riyadh.

He added that “all those who played a role in the murder” had to face punishment.

Erdogan said that the murder was “planned” days in advance according to a “roadmap” set up by a Saudi team who were sent to Istanbul for the purpose. The surveillance system at the Saudi consulate in Istanbul was deactivated on purpose, he said.

“First they (the Saudis implicated) removed the hard disc from the camera system,” Erdogan said. “This is a political murder,” he added.

But Erdogan added he still wanted answers on numerous issues including “who gave orders” to the team and where the corpse is.

Erdogan did not mention Prince Mohammed by name in the speech but said he was confident of the full cooperation of his father Saudi King Salman in the probe.

‘Must never happen again’
Saudi Arabia only confirmed the killing more than two weeks after the event. The killing has alarmed even Saudi Arabia’s staunchest Western allies.

US President Donald Trump said he was “not satisfied” with Riyadh’s explanations.

A former royal family insider turned critic of the Saudi crown prince, Khashoggi, 59, disappeared after he entered the Saudi consulate in Istanbul on October 2 to collect a document for his upcoming marriage.

The case has shone the spotlight on the crown prince, who was credited with reforms including giving women the right to drive but is now accused of having ordered Khashoggi’s murder — a claim Riyadh denies.

The timing of the controversy could not be worse for Prince Mohammed as the investment summit, dubbed “Davos in the desert”, began in Riyadh,big-named owned by big name cancellations and Erdogan’s threat of revelations.

Dozens of executives, including from banks Goldman Sachs and JP Morgan, ride-hailing app Uber and Western officials such as International Monetary Fund chief Christine Lagarde have pulled out of the three-day Future Investment Initiative (FII).

German Chancellor Angela Merkel said Berlin would not export arms to Riyadh “in the current situation,” despite Germany’s approval last month of 416 million euros’ ($480 million) worth of arms exports in 2018.

Despite also pulling out of the summit, US Treasury Secretary Steven Mnuchin met the crown prince behind closed doors for bilateral talks in Riyadh. CIA Director Gina Haspel, meanwhile, headed for Turkey, although details of her trip were not immediately clear.

White House advisor and Trump’s son-in-law Jared Kushner, believed to have close ties with the crown prince, said he had urged him to be “fully transparent”, stressing that “the world is watching”.

Speaking in Jakarta, Saudi Arabia’s Foreign Minister Adel al-Jubeir vowed “a thorough and complete investigation”. He said procedures would be put in place to “ensure that something like this can never happen again.”