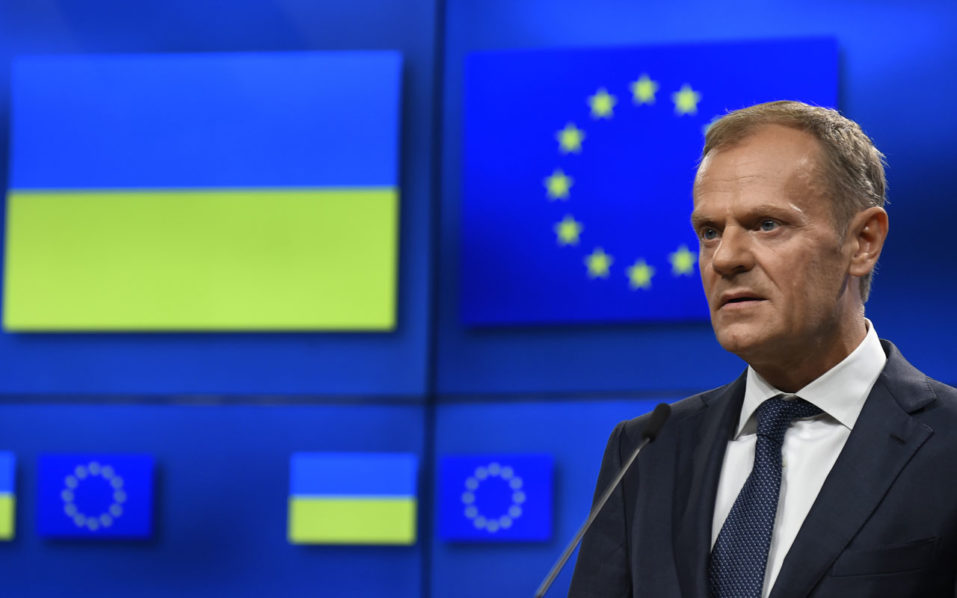 President of the European Union Council Donald Tusk delivers a speech during a joint press conference with Ukrainian President as part of the EU leaders summit at the European Council, in Brussels, on June 22, 2017. / AFP PHOTO / JOHN THYS

EU leaders are running out of time to reassure their citizens the European Union can control migration before authoritarian politicians win the high-stakes debate, the bloc’s president Donald Tusk warned Wednesday.

In a letter inviting the leaders to the EU summit starting Thursday, Tusk proposed new steps to bolster external borders, including setting up migrant reception centres in north Africa.

“More and more people are starting to believe that only strong-handed authority, anti-European and anti-liberal in spirit, with a tendency towards overt authoritarianism, is capable of stopping the wave of illegal migration,” Tusk said.

“If people believe them, that only they can offer an effective solution to the migration crisis, they will also believe anything else they say,” Tusk added.

“The stakes are very high. And time is short,” the European Council president warned.

Tusk said the EU collectively reduced illegal border crossings by 96 percent from the peak of more than one million in 2015, when Europe faced its worst migration crisis since World War II.

In order to bolster the external border, he proposed the summit endorse “disembarkation platforms outside Europe” to separate genuine refugees from economic migrants, who can legally be sent back to their home countries.

EU officials say the platforms could be set up with the help of UN agencies in north African countries such as Tunisia, although no formal proposal has been made.

Tusk also called for increased cooperation with countries of origin and transit, and in particular EU support for the Libyan Coastguard.

His comments came after a German charity rescue vessel was expected to dock in Malta later Wednesday following a six-day standoff over which countries would take in the more than 200 North African migrants on board.

Cooperation deals with Libya and Turkey, the main transit countries, have been credited with having sharply reduced migration.

Tusk also invited the leaders to discuss the threat to western unity posed by Donald Trump, particularly after the G7 summit in Canada when he insulted host Justin Trudeau and refused to sign a final statement.

“Despite our tireless efforts to keep the unity of the West, transatlantic relations are under immense pressure due to the policies of President Trump,” he wrote.

He said the “divisions go beyond trade,” where Trump has imposed tariffs on steel and aluminium.

“While hoping for the best, we must be ready to prepare our union for worst-case scenarios,” he warned.