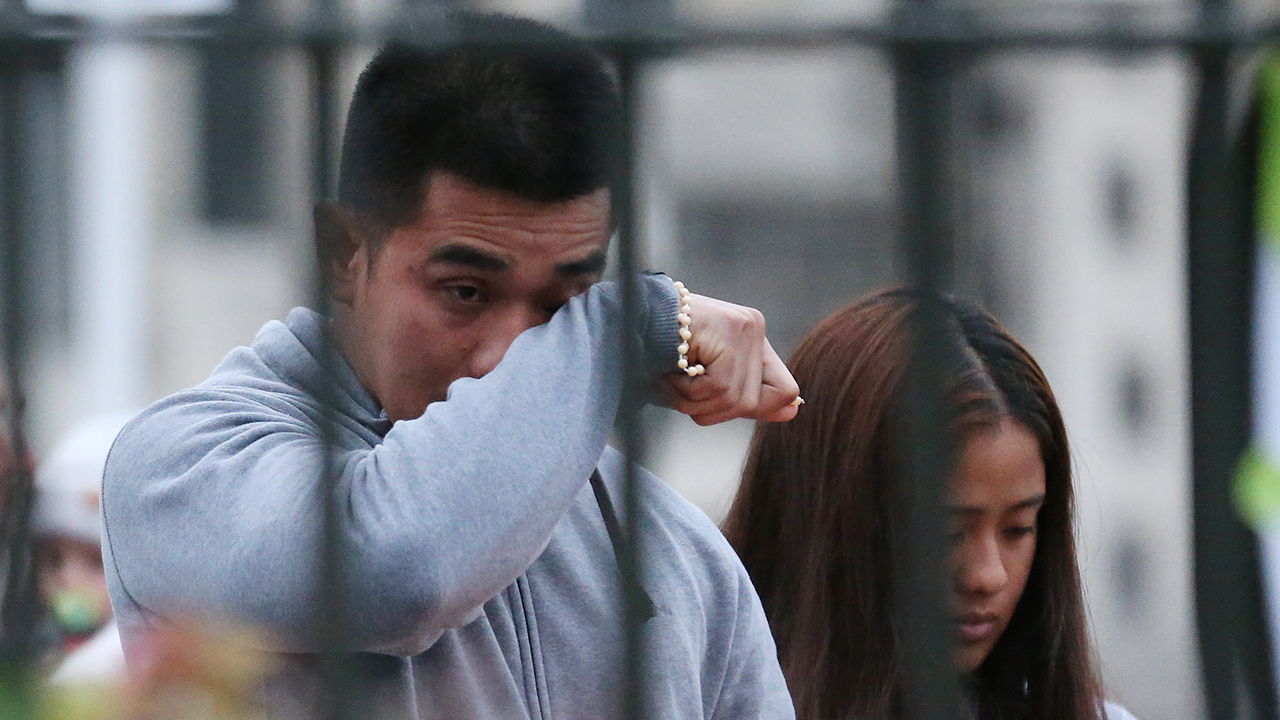 People pay their respects in front of floral tributes for victims of the March 15 mosque attacks, in Christchurch on March 16, 2019. – A right-wing extremist who filmed himself rampaging through two mosques in the quiet New Zealand city of Christchurch killing 49 worshippers appeared in court on a murder charge on March 16. (Photo by DAVID MOIR / AFP)

A right-wing extremist who filmed himself rampaging through two mosques in the quiet New Zealand city of Christchurch killing 49 worshippers appeared in court on a murder charge Saturday.

Australian-born 28-year-old Brenton Tarrant appeared in the dock wearing handcuffs and a white prison shirt, sitting impassively as the judge read a single murder charge against him. A raft of further charges are expected.

The former fitness instructor and self-professed fascist occasionally turned to look at media present in court during the brief hearing that was held behind closed doors for security reasons.

He did not request bail and was taken into custody until his next court appearance scheduled for April 5.

Forty-two people are still being treated in hospital for injuries, including a four year old child, after an attack thought to be the deadliest directed against Muslims in the West in modern times.

Prime Minister Jacinda Ardern said Saturday the victims were from across the Muslim world, with Turkey, Bangladesh, Indonesia and Malaysia among the countries rendering consular assistance.

One Saudi citizen was killed and another wounded, according to Saudi-owned Al-Arabiya television news channel.

At least two Jordanians were among the dead, according to that country’s foreign minister, while Pakistan foreign ministry spokesman Mohammed Faisal said five citizens of his country were missing.

Ardern described the spree killing as a terrorist attack and said the shooter — who was not on any watchlist and did not have a criminal record — had legally purchased the two semi-automatic weapons, two shotguns and lever-action gun he used.

“The offender was in possession of a gun licence” obtained in November 2017, and he started purchasing the weapons the following month, she said.

“While work is being done as to the chain of events that led to both the holding of this gun licence, and the possession of these weapons, I can tell you one thing right now — our gun laws will change,” she vowed.

The suspect documented his radicalisation and two years of preparations in a lengthy, meandering and conspiracy filled far-right “manifesto”.

He live-streamed footage of himself going room-to-room, victim to victim, shooting the wounded from close range as they struggled to crawl away in the main Christchurch mosque.

Two other people remain in custody, although their link to the attack is unknown. A third person who was earlier arrested was said to be a member of the public with a firearm who was trying to help.

Two improvised explosive devices (IEDs) were found in a car and neutralised by the military, while police raided a home in Dunedin, where Ardern said the suspect was based.

– ‘Horrible massacre‘ –
Tributes to the victims poured in from around the world.

US President Donald Trump condemned the “horrible massacre” in which “innocent people have so senselessly died”, but denied that the problem of right-wing extremism was widespread. 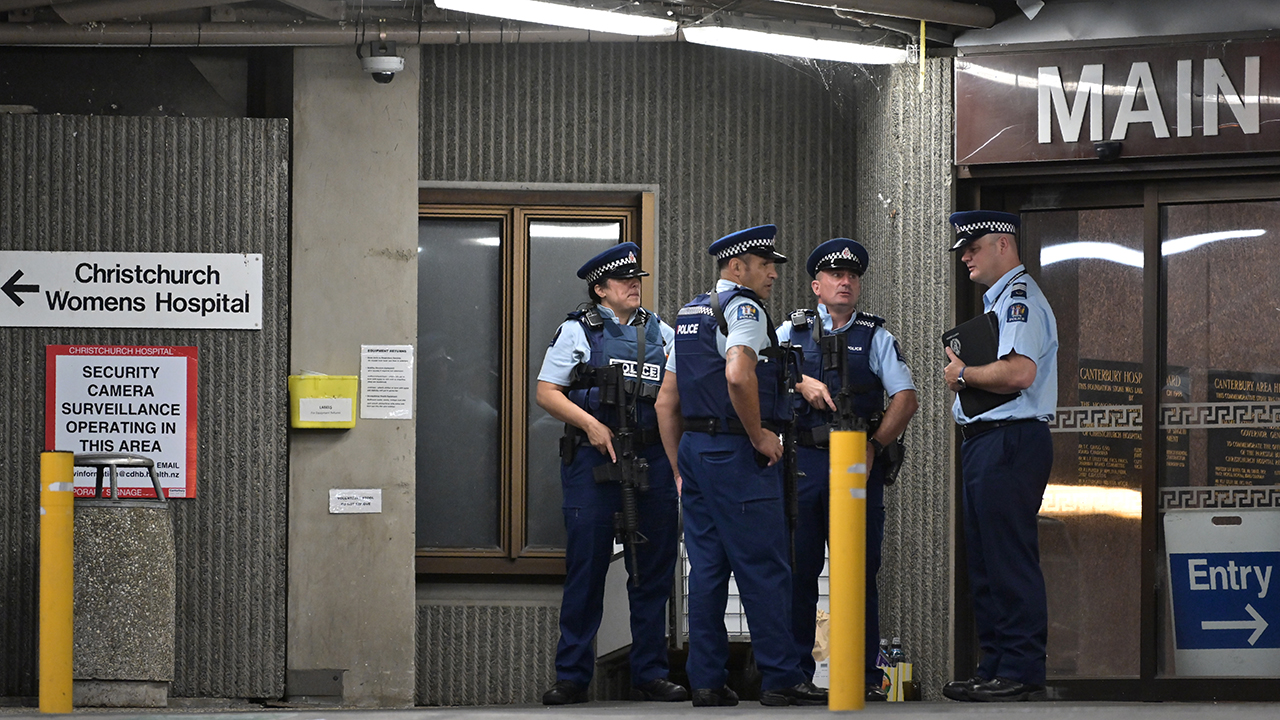 Police stand guard outside a hospital in Christchurch on March 16, 2019, a day after a shooting incident at two mosques. – A right-wing extremist who filmed himself rampaging through two mosques in the quiet New Zealand city of Christchurch killing 49 worshippers appeared in court on a murder charge on March 16. (Photo by Anthony WALLACE / AFP)

The shooter’s two targets were the Masjid al Noor mosque, where 41 people were killed, and a second, smaller mosque in the suburb of Linwood, where seven more died. The remaining victim succumbed in hospital.

The dead were said to include women and children.

The survivors included 17 members of Bangladesh’s cricket team, whose game against New Zealand on Saturday has been postponed, and a Palestinian man who fled for his life after seeing someone being shot in the head.

“I heard three quick shots, then after about 10 seconds it started again,” said the man, who did not wish to be named.

“Then people started running out. Some were covered in blood,” he told AFP.

New Zealand police described the footage shot by the gunman — which AFP has verified, but is not distributing — as “extremely distressing” and warned web users that they could be liable for up to 10 years in jail for sharing such “objectionable content”.

The attack has shocked New Zealanders, who are used to seeing around 50 murders a year in the entire country of 4.8 million and pride themselves on living in a secure and welcoming place.

Police warned Muslims across the country not to visit mosques “anywhere in New Zealand” in the wake of the Christchurch attacks. Friday is Islam’s holy day.

– ‘Bodies all over’ –
The attack shocked the local Muslim population, many of whom had come to New Zealand as refugees.

One witness told news website Stuff he was praying when he heard shooting — and then saw his wife lying dead on the footpath outside when he fled.

Another man said he saw children being shot.

“There were bodies all over,” he said.

Mass shootings are very rare in New Zealand, which tightened its gun laws to restrict access to semi-automatic rifles in 1992, two years after a mentally ill man shot dead 13 people in the South Island town of Aramoana.

However, anyone over 16 can apply for a standard firearms licence after doing a safety course and police check.

Christchurch, a relatively small city on New Zealand’s south island, hit global headlines in 2011 when it was struck by a deadly earthquake, killing more than 180 people.