You are here
Home > 2019 General Election > FACT CHECK: Did Sanusi ask Nigerians to vote for Atiku?

With the rescheduled presidential election a few days away, the social media has come alive again (as if it was ever sleep). In a broadcast that has been trending since Monday, Muhammadu Sanusi II, the emir of Kano, is quoted to have asked Nigerians to vote for Atiku Abubakar, the presidential candidate of the Peoples Democratic Party (PDP).

Since the emir had made statements that appeared critical of the economic policies of President Muhammadu Buhari in the past, it was not too difficult to believe the message which has been trending.

He was speaking on Friday, February 15, at the Kano central mosque during a special prayer session for peace during and after elections. District heads and imams and scholars were present at the early morning session. TheCable has now secured the audio tape of Sanusi’s remarks, which were in Hausa.

According to the interpretations on social media, Buhari is the leader with “integrity without capacity to govern” while Atiku is the one with “capacity without integrity”. Sanusi said Nigerians should “choose the one that has the capacity to govern because [this] will benefit the people while his lack of integrity will be his own harm”. But the one that lacks capacity, he said, “will harm the people while his integrity will only benefit himself”. The implication of the statement is that he as endorsing Atiku, according to those circulation the quote.

What Sanusi said is in line with Islamic law and practice, according to a Muslim scholar who spoke off-the-record with TheCable.

Ahmad bin Hambal, the 8th century Muslim jurist regarded as “the most significant exponent of the traditionalist approach in Sunni Islam”, was asked: “Who’s more appropriate to lead? A trustworthy weak leader or an immoral strong leader?” He replied: “As for the trustworthy weak leader, his trustworthiness is to himself, but his weakness is to the disadvantage of the nation. While the immoral strong leader, his immorality is to himself, while his strength is to the advantage of the nation”.

These were the words quoted by the emir of Kano in his remarks and this is the standard Islamic political thought, according to the scholar. Ahmad is the founder of one of the four Sunni schools of Islamic law and jurisprudence. His position has been articulated well many jurists in the past, including Ibn Taimiyya who said if a leader is incompetent and weak he cannot be chosen just because he is honest or has integrity. If a more competent candidate is available even if he is not as honest, he will be a better leader.

By the ordinary meaning of the quotes used by the emir, he did not expressly endorse Atiku. However, many will take it as a cryptic message aimed as discouraging support for another term for Buhari. Given that there are other candidates in the race but only two are considered to be realistic choices, narrowing down the beneficiary of Sanusi’s message to Atiku appears to make sense. Still, the emir can flatly deny overtly endorsing Atiku — and he would be correct, technically. 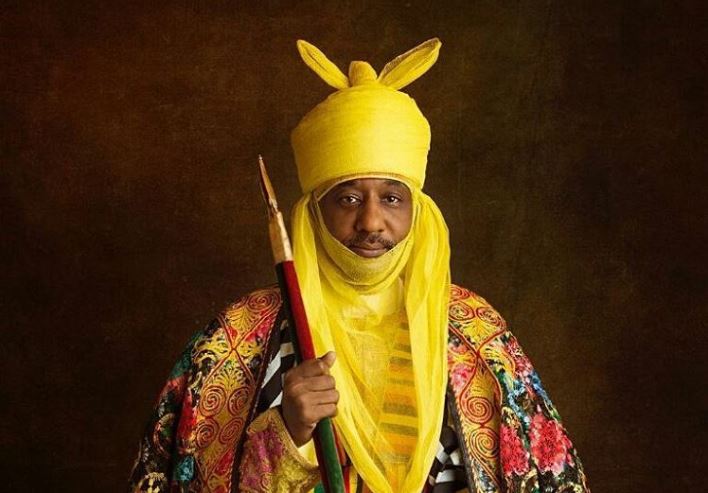 Reproduced below is the English translation by TheCable of the remarks made by Sanusi on Friday, February 15, at the Kano central mosque during a special prayer session for peace during and after general election

We are all aware of recent occurrences in Kano in this period of elections. Youths were seen around the city yesterday brandishing weapons and harassing people. Roads were blocked for people coming into the city. We are praying and will continue to pray for peace.

It has become pertinent to remind politicians of their responsibilities. The Messenger of Allah (SAW) stated that you have to tie your camel and then rely on God Almighty. It is not possible for one to be praying for the peaceful conduct of the elections and at the same time to be issuing dangerous weapons and illicit drugs to thugs and direct them to go and fight. It is wrong before God Almighty to do that.

More so, the intimidating statements by politicians threatening to shed blood and kill people is similar to destroying the prayers we are offering. I wish to call on the security agencies, we shall continue to pray but it is also binding on them to tie the camel for us. They should be steadfast and ensure that the youths brandishing weapons about and the leaders arming them should be made to face the wrath of the law as no one can be above the law.

Whosoever is seen to be advocating bloodshed and it comes to be implemented, irrespective of who he is should be arrested and prosecuted accordingly. We hereby call on the general public enlighten the youths to know that no politician is worth shedding the blood of another person for.

This is a democracy under which whosoever is elected will be in office for only four years. You should be patient, if you loose it will take only four years for you to try your luck again. The 2015 election is today like an event that took place just yesterday and we are now talking about 2019. If you are patient it will come to pass if God Almighty gives us the long life to see it.

Therefore whosoever contests and loses should be patient for those years. When the time comes he will then contest again, maybe that is the time Almighty God might have slated for his success.

But for one to insist that it has to be his time is wrong. Even here in Kano we have had an incumbent governor that lost election and had to wait for eight years to come and complete his second term in office. We have seen it and are witnesses to the fact that it is only when the God Almighty wills that you can get want you are aspiring for. If He does not will you will not be.

We are therefore calling on political leaders, both those in government and those in the opposition to remember the saying of Almighty Allah that whosoever kills another unjustly is the same as killing the entire humanity (quotes the Qu’ran).

Firstly, he will be rewarded with hell fire. Secondly, after entering it he shall dwell therein forever. Thirdly, he shall remain under the anger of God Almighty. Number four, he is cursed by God Almighty. Number five, even as he dwells in hell fire, he shall face most terrifying chastisement. Oh you people, whosoever feels there is something in this world, or a position that is worthy enough for him to be placed in this chastisement should go ahead and do it.

We call on all mosques to engage in special prayers seeking the God Almighty not grant the wishes of any politician that is planning to shed blood. I want to make it categorically clear that we will never support any politician with primordial sentiment, one that would want use his position to cause anarchy. We are also praying to God to let hell befall on such a politician whose aim is to set fire on the house of peace, based on parochial considerations.

It is most compelling for the Muslim ummah to embark on prayers in mosques and other places of worship to pray for the fall of any politician who wants to use bloodshed and chaos in seeking political office. We are not the type of people who take solace in supporting dastardly acts. Governance is all about protecting people’s lives and properties, in addition to safeguarding their credibility, honour and prestige.

We are also reminding and reprimanding district heads and imams not to engage in partisan politics. Even though one is free to express his opinion as ordained by the constitution, but we still find it wrong for imams and district heads to stand on the podium to bare their respective opinions on the candidate of their choice.

Our contention is that in time of acrimony, we are the people expected to wade in and that when we wade in, we will do justice to the party oppressed. We are only expected to employ simple diplomatic finesse in resolving any dispute based on the teachings of Islam. Whatever one says, would be misconstrued to mean another thing.

Sometime back, we called on people to elect knowledgeable people to various positions of authority, a call misconstrued by journalists to mean that we are calling for people with high certificate to be elected. I am not in any way bothered by such a hue and cry. Even God himself had ordained such an act.

We have to fulfill certain obligations, as far as leadership is concerned. A leader is expected to be energetic, healthy and physically fit. One with the acumen to lead. When we fulfill such obligation we have no cause for any jittery. Remember, our focus should be on one ever ready to uphold public trust and be able to guard public purse, not the one who would pay credence to bloodbath. Once one does not possess such qualities, he or she is not qualified to lead.

Incompetence is a great disservice to humanity, because an incompetent leader destroys everything. So one has to focus attention on electing the most honest and competent leaders to lead them. Failing to do that would expose their future to great danger and risk. This is what Allah and his Holy Prophet said and ordained us to do. No more no less.