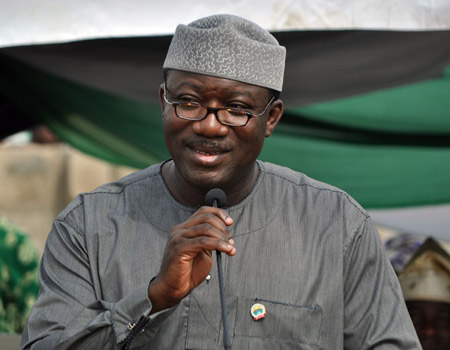 Fayemi gave the commendation at the orientation programme for the  2,200 Batch A corps members for 2019 in Ise-Ekiti.

The governor was represented by the Secretary to Ekiti State Government, Mr Abiodun Oyebanji.

“In the recently concluded general elections, Ekiti was adjudged the freest and fairest, this was made possible because of the cooperation of stakeholders to deliver on their mandates,  especially the NYSC.

“We acknowledge and appreciate the corps members that participated in the exercise,” Fayemi said.

The governor urged the new entrants to ensure that they play roles which unite the nation.

“Nigerians have now come to term with the fact that NYSC is a cornerstone for our nation’s unity.

“Therefore, as new entrants to the scheme, I challenge you to aspire to surpass the good works of your predecessors,’’ he said.

In her address of welcome, the State Coordinator of NYSC, Mrs Emmanuela Okpongete, urged the state government to ensure the immediate renovation of some dilapidated staff quarters in the camp.

“Your Excellency Sir, permit me to seize this opportunity to press home our request for the renovation of some of our dilapidated staff quarters in order to avert disasters.

“Some of these buildings need to be pulled down immediately,’’ he said.

She commended  the state government for its support  to the scheme, saying the approval of “N1.5 million to support feeding in the camp was highly appreciated.”

The News Agency of Nigeria (NAN)  reports that high point of the event was the administration of Oath of Allegiance on the corps members by  Ekiti Chief Judge, Justice Ayodele Daramola.

The chief judge was represented at the occasion by Justice Olusegun Ogunyemi.