You are here
Home > agriculture > FG kicks off grazing reserve project with 31,000 hectares in Niger State 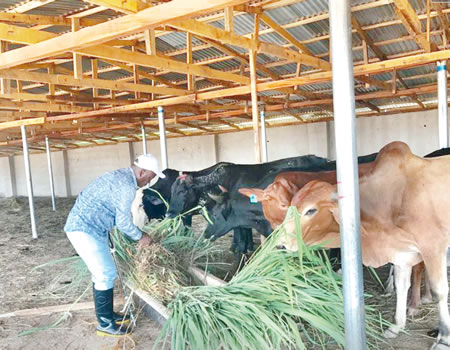 The Federal Government has began the process of resettling herdsmen and bringing to an end the continued farmers/herders clashes in the country, as Niger state in North Central Nigeria taking the lead with the establishment of a 31,000 hectares of grazing reserve in the state.

The state keyed into the federal governments National Livestock Transformation Programme by establishing the 31,000 hectares of grazing reserve worth about N30 billion.

The grazing reserve located in Bobii village in Mariga Local Government Area of Niger state is being equipped with a complete Vetenary hospital, two Dams, Health care facility, grass growing fields, settlement areas for the herders, milk processing factory, Abattoir and a well equipped school for the children of the herdsmen.

The Minister of Agriculture and Rural Development Chief Audu Ogbeh who was on an inspection tour of the facility commended the efforts of the Niger state government in supporting the federal government’s plans to resettle herdsmen in the country.

“We are very grateful to Niger state for leading the way and for sharing our dreams in our plans to end crisis between herdsmen and farmers. You can see what they laid out, thirty thousand hectares of land, it is one of the largest grazing reserves in the country and there are some more, so we are grateful to Niger state, we are grateful to the people of Niger and we are now hoping that this will be the pilot after which ten or twenty or thirty more will be built in different states of the country.

“Our desire is to end this crisis, we don’t want ne single life lost and like you heard the farmers saying, they too want to settle down and live a decent life, send their children to school and live like every other Nigerian in comfort and make some money from their cattle and their milk and their Hyde and skin this is the whole idea. A lot of support, I can’t even quantify it, I’ve told you now, we bring them machines for milking cows, we are going to set up milk processing factories here, run by private sector operators.

“They already have dams, we’ve sent them pumps, solar pumps and others, we’ll help them grow grass, bring in machines to process agro waste, so that when there is no grass the cattle have something to eat and luckily, they have water wells now, the cows must eat at least ten of fifteen kilograms of grass per day and at least thirty liters of water and then we start artificial insemination to improve the breed of cattle, so by the time is one year and a half, it should weigh four hundred kilograms and the farmer can sell it”, Ogbeh said.

The Minister while interacting with some of the herders, was told by their leaders that their people don’t like moving around, living in bushes with no form of civilization and without formal education for their children and interaction with the outside world.

Chief Ogbeh said the way the herders showed interest in the project demystified the general notion that the Fulani people like to live in bushes and are not interested in civilization.

“You have heard now, demystification of the theory, that the Fulanis’ like to walk about because it is their way of life, it is not true, you heard them, they want to live like everybody else, they want to drive good cars, send their children to school and live a normal settled life, because they are farmers and for those who say we should not support them, I want to say once again, cattle rearing is farming, iit is so in every part of the world. We forget them for nearly six years and so their grazing habit has become a problem, we are trying to solve them.

“They are farmers, the way we support maize farmers, rice farmers, beans farmers, cassava farmers, we have to support them to settle down and then there will be peace in the country because the president approved money, one money went through council yesterday, another one will go through council in two weeks time, we will be here implementing the programme including the rural settlement we are going to do on this places for people to live in.

“I am highly impressed with this, highly and I will take the report to the council to tell them what we’ve done and I am asking the states that are willing, I emphasize, we are not forcing any state to do this. I’ve been hearing that we are trying to take people’s ancestral lands and seize their lands and give to herdsmen and colonize them, no such intention”, he added.

Ogbeh further noted “wherever the state governors are willing and sixteen states have written to us, we’ll do it, any state that later changes its mind, that want to join the programme will do so, but we want to stop the open grazing and the moving around and give this industry what it deserves, it is a very big industry, it is six percent of GDP. Lagos consumes seven thousand cows a day in full and twenty thousand goats, so people shouldn’t be making mistakes about the value of this industry, it is very strategic, we spend one point two million dollars a year importing milk, if we create this ranches and the cow is settled, they will increase their yield of milk and we will stop importing milk into this country in two years and everybody will be happy.

On his part the Niger State Deputy Governor Ahmed Mohammed Ketso said “the idea was also conceived based on the directives of Mr. President and we discovered what we need to do first is to build social infrastructures for them to believe that, really, it is possible.

“Because, we want a situation whereby Niger state will take the lead, so we in Niger state, the governor has really agreed that he wants to do this for the purpose of the comfort to the married Fulanis and also to avoid the issue of clashes, because insecurity is a big challenge to us in Nigeria, we don’t want to live in a state where everybody is living with fear so that is why we quickly concede to the idea of Mr. President”.