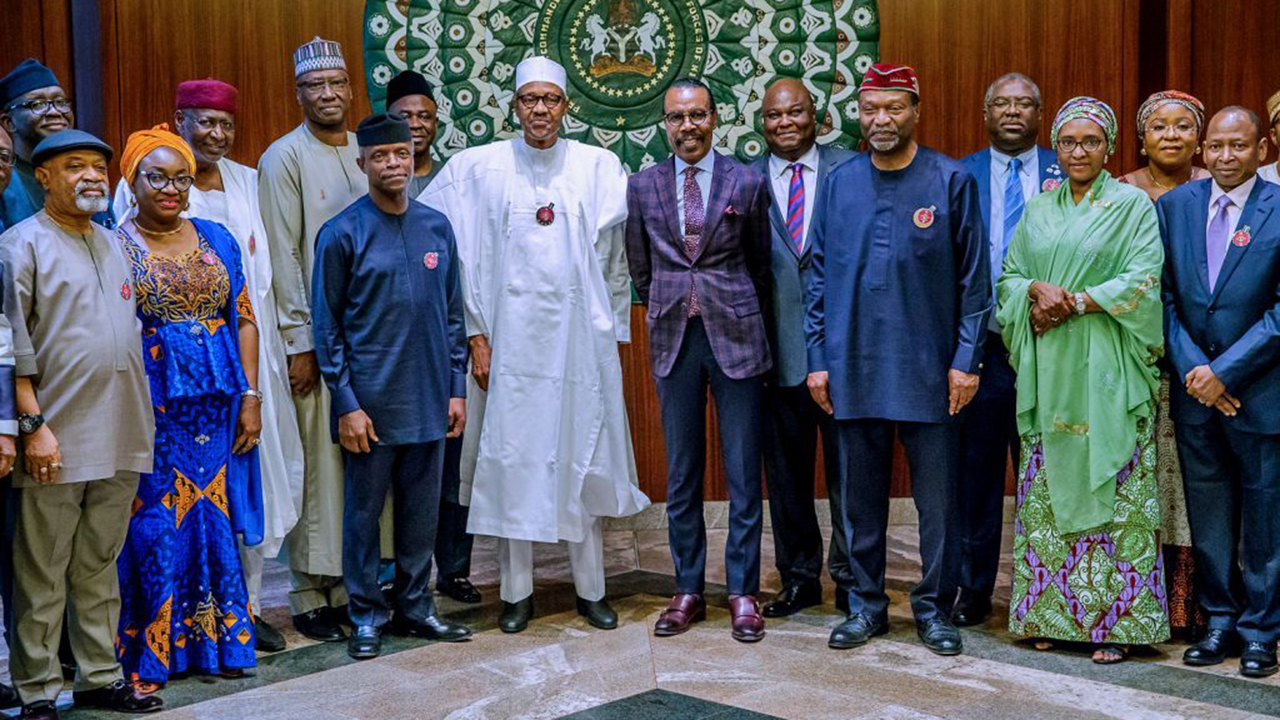 MUHAMMADU BUHARI, PRESIDENT, FEDERAL REPUBLIC OF NIGERIA AT THE INAUGURATION OF A TECHNICAL ADVISORY COMMITTEE ON THE IMPLEMENTATION OF THE NATIONAL MINIMUM WAGE

He also announced that the Federal Government would review the salaries of workers currently earning above the national minimum wage.

The appointment of the advisory committee comes a day after the Nigeria Labour Congress (NLC) held a nationwide protest over the wage demand.

It is not clear whether the review of the salaries of those earning higher than the current minimum wage would be downward or upward.

According to the president, the re-negotiation will commence shortly after the passage of the new minimum wage law.

“At the federal level, we have made adequate provision for the increase in the minimum wage in our 2019 budget proposals, which we submitted to the National Assembly. Therefore, we will be able to meet the additional costs that will be incurred in moving up all personnel who are currently earning below the new minimum wage.

“We anticipate that after the new minimum wage has been passed into law, we will be going into negotiations for salary review for all the workers who are already earning above the new minimum wage. It is therefore important that we are properly prepared to meet these demands,” the president said.

“I want to make it clear that there is no question about whether the national minimum wage will be reviewed upwards. I am committed to a review of the minimum wage,” he added.

The committee’s terms of reference include proposing a work plan and modalities for implementation. It is to be headed by a popular economist, Bismark Rewane.

There have been mixed reactions however on Rewane’s appointment. Dr. Ikechukwu Kelikume, a lecturer at the Lagos Business School, was pessimistic. “When you take an economic analyst to the corridors of power where he will begin to face off with political influence, the result is usually different. Know also that political economy trumps the macro-economy.

“You may be a very good economic analyst, but when you get into the corridors of power, you then see how difficult it is for a typical politician to adopt your word. It is difficult for me to say that positive results will come out because those people that call the shots are politicians,” he said.

But Director General of the Lagos Chamber of Commerce and Industry (LCCI) Muda Yusuf believed the committee would come up with a solution and framework that would be sustainable. “By the time they come up with their report, the expectation is that the report is devoid of political imposition; a result of technical exercise. Ability to justify the outcome of their position will be accepted by the parties, considering that the outcome is devoid of political actions,” he said.

In a statement by his media aide, Lere Olayinka, Fayose said: “It is on record that on November 6, 2018, while receiving the report of the tripartite committee, Buhari endorsed N30, 000 as new national minimum wage. He also promised to send a bill to the National Assembly to effect the change from N18, 000 to N30, 000.

“This is more than three months ago and the president is now setting up another committee purportedly to recommend modalities for the implementation of the new minimum wage. So, what did the first committee that recommended the N30, 000 minimum wage actually do?

“How many committees is he going to set up on a new minimum wage that he told Nigerians he had already approved since November last year and was set to present the bill to the National Assembly?”

He concluded: “The president is simply playing on the intelligence of the workers by giving the impression that he is committed to the new minimum wage, so as to get votes from them. The workers should therefore shine their eyes and avoid being deceived by a president who has failed in all ramifications and is desperately seeking to hold on to power even at the expense of suffering Nigerians.”