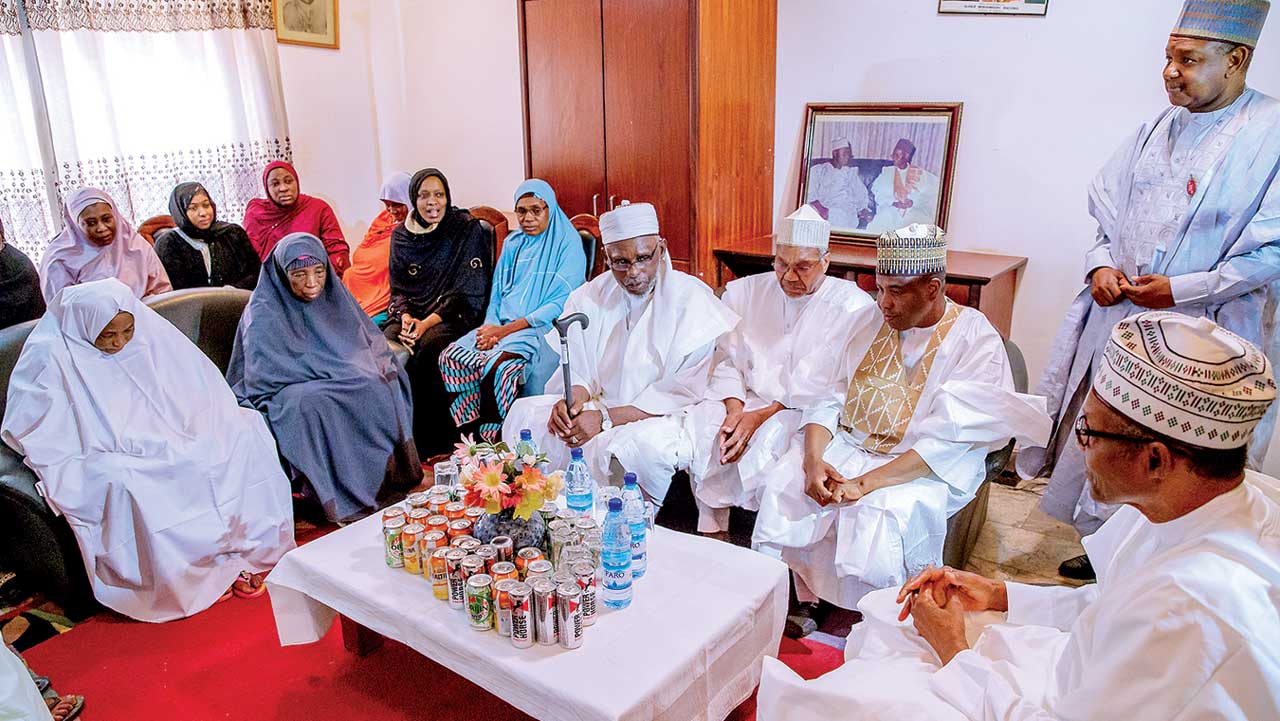 President Muhammadu Buhari with family members of the late former President Shehu Shagari during his condolence visit to them in Sokoto…yesterday.

President Muhammadu Buhari yesterday said the Federal Government would in due course institute a suitable memorial to immortalize the late former President, Alhaji Shehu Shagari, who passed away last Friday at the age of 93. Buhari made the pledge in Sokoto while paying a condolence visit to the Shagari family.

In a letter to the Sokoto State governor, Alhaji Aminu Waziri Tambuwal, read by the governor at the event, Buhari said he received with sadness the news of the passing away of Shagari.“This, indeed, is a grievous loss, which will be felt throughout Nigeria, irrespective of any difference. The late Alhaji Shagari was a landmark figure being virtually our last link to the post-independence government of Alhaji Abubakar Tafawa Balewa, and the first elected executive president of Nigeria.

“Please convey to his immediate family, the government and the people of Sokoto State my heartfelt condolences on the passing away of this great statesman. The Federal Government will in due course institute a suitable memorial to the late former President.”Also yesterday, Governor Tambuwal declared Monday, December 31, 2018 as a public holiday and special prayer day in honour of the late Shagari.

A statement by his Director General on Media and Public Affairs, Malam Abubakar Shekara, said that the declaration was done in consultation with the Sultanate Council.The state government has, therefore, requested the Imams of mosques across the state and the general public to dedicate the day for special supplications for the repose of the soul of the former president and for peace and progress of the nation at large.

The government also directed that all flags at public and private premises be flown at half mast.Meanwhile, the death of Shagari has brought to the fore the wasted resources at Ajaokuta Steel complex which he conceived and almost completed before his government was overthrown.

Former governor of Kogi State, Idris Wada, said: “He was a great leader for being able to conceive and almost bring to 98 percent completion a project like Ajaokuta steel which can lead Nigeria out of poverty, create a lot of employment, to give us a background to become a modern industrialised nation.

“It is necessary now as we mourn him, that those in authority today give priority to Ajaokuta steel for its completion as a legacy of the late former first president.”He said Shagari had good plans for the country but unfortunately his government was interrupted through a military coup.“He would have led Nigeria into a very modern democracy because, as a selfless leader, he put the country first in everything he did.”Wada’s former deputy, Yomi Awoniyi, said Shagari was a man of destiny who, all he wanted to be was a senator, but God made the president.

The governorship candidate of the Labour Party (LP) in Kwara State, Issa Aremu, urged the present crop of politicians to emulate Shagari.
Aremu, in a chat with reporters yesterday in Ilorin, the state capital, praised Shagari for playing politics with a proactive mind just as he lauded him for signing the first Minimum Wage Act for Nigerian workers in 1981, some 37 years ago.

“The best tribute to Shagari, is for the politicians to rededicate themselves to the great task of nation building through statesmanship and renewed peaceful democratic conduct as elections approach. “The most remarkable attribute of Shagari was horizontal and vertical consensus building, tolerance and peaceful conduct in a polity rooted in acrimony and mutual war of attrition.”

Aremu recalled that the late president, even though leading the then ruling National Party of Nigeria (NPN), commendably supported the Lagos metro-line project notwithstanding the fact that former Governor Lateef Jakande of Lagos State hailed from the opposition Unity Party of Nigeria (UPN).

Besides, Aremu noted that Shagari exercised considerable presidential restraint in the face of provocation of the then opposition Oyo State government whose officials allegedly demolished NPN-constructed houses.