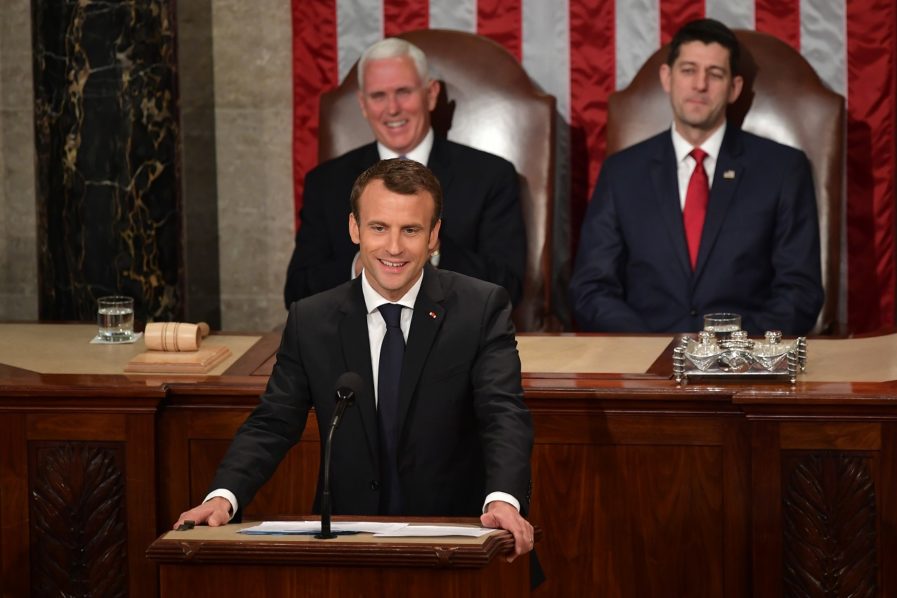 France’s President Emmanuel Macron addresses a joint meeting of Congress inside the House chamber on April 25, 2018 at the US Capitol in Washington, DC. / AFP PHOTO / MANDEL NGAN

French President Emmanuel Macron was poised to address US lawmakers Wednesday as he wraps up his three-day visit to Washington — a whirlwind of nuclear diplomacy on Iran, and lighter moments showcasing his unlikely “bromance” with Donald Trump.

Macron earned an exuberant welcome from the Republican president — an elaborate state dinner, an intimate dinner for four with their wives at George Washington’s Virginia estate Mount Vernon, and repeated vows of friendship.

“May our friendship grow even deeper, may our kinship grow even stronger, and may our sacred liberty never die,” Trump said in his toast to the Macrons late Tuesday at the White House.

In turn, the 40-year-old French leader spoke at length of “how deep, how strong, and how intense the relationship is between our two countries,” and marveled at the unforeseen rapport he has forged with the 71-year-old Trump.

“I got to know you, you got to know me. We both know that none of us easily changes our minds, but we will work together, and we have this ability to listen to one another,” he said.

In his speech Wednesday, Macron will address what he thinks are historically warm Franco-US ties now challenged by differences over economic inequality, climate change and the rise of nationalism, according to his aides.

– Iran and trade –
But amid all the friendly gestures — Trump even seemingly flicked dandruff off Macron’s shoulder to “make him perfect” — the pair’s meetings were not all about style, with the fate of the Iran nuclear deal and transatlantic trade on the table.

The pair called for a “new” deal with Tehran, looking beyond their past disagreements over the landmark 2015 accord to curb the Islamic republic’s nuclear program — an agreement slammed by Trump as “insane” and whose future still hangs in the balance.

Trump instead wants a broader “deal” that would also limit Iran’s ballistic missile program and support for militant groups across the Middle East.

“I think we will have a great shot at doing a much bigger, maybe, deal,” said Trump, stressing that any new accord would have to be built on “solid foundations.”

Macron admitted after meeting Trump that he did not know whether the US president would walk away from the nuclear deal when a May 12 decision deadline comes up.

“I can say that we have had very frank discussions on that, just the two of us,” Macron told a joint press conference Tuesday with Trump at his side.

Putting on a brave face, he said he wished “for now to work on a new deal with Iran” of which the nuclear accord could be one part.

The key question is whether Macron can translate their privileged relationship into concrete results — as he also pushes for a permanent exemption for Europe from US steel and aluminium tariffs.

After his speech to Congress, Macron will meet students at George Washington University and deliver a final press conference before heading back to Paris.