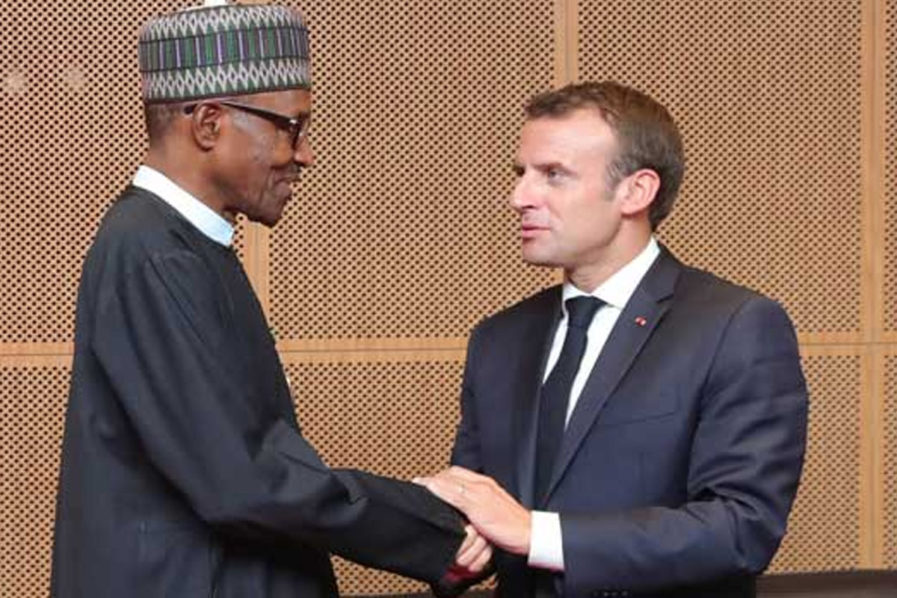 French President Emmanuel Macron on Tuesday arrived in Abuja for a meeting with his Nigerian counterpart Muhammadu Buhari, in his latest attempt to forge closer ties with English-speaking Africa.

Macron’s jet touched down in Abuja from Mauritania, where he attended the final day of the African Union summit dominated by security issues in the restive Sahel region.

He was met on the tarmac by Nigeria’s foreign minister, Geoffrey Onyeama, before the presidential convoy left for Buhari’s Aso Rock residence on the edge of the capital.

The 40-year-old former investment banker, who speaks fluent English, spent six months as an intern at the French embassy in the city in the early 2000s.

He told reporters travelling with him: “I like Nigeria a lot. It’s an appealing country. I’ve got a lot of memories… that haven’t left me.”

Since coming to power he has made a point of boosting ties with France’s former colonies but also improving trade with anglophone countries.

He visited Ghana last year and Nigeria — Africa’s economic powerhouse and the continent’s leading oil producer — was the next logical step.

Nigeria, a country home to over 180 million people, produces nearly two million barrels of crude oil per day and is a key economic partner for France.

Security talks
Macron said en route from Mauritania that “regional security and the fight against Boko Haram” would be high on the agenda in talks with Buhari, calling him a “key player”.

Nine years of violence in the remote northeast has spread across the wider Lake Chad area. As a result, Macron said “the mobilisation of African states is fundamental”.

Nigeria and its French-speaking neighbours Cameroon, Chad and Niger are involved in a joint military force to combat the jihadists, whose violence has killed at least 20,000 people.

Nigeria is currently gripped by a resurgence of violence between nomadic cattle herders and farmers, which has claimed some 1,000 lives since January this year.

Amnesty International last week said some 1,813 people have been killed in all types of violence since the start of 2018 — more than double that in the last 12 months alone.

That has put former military ruler Buhari, 75, under pressure as he looks towards securing a second term at elections in February next year.

In Nouakchott, Macron held talks with the leaders of the French-backed five-nation military force fighting Al-Qaeda-linked jihadists in the Sahel.

Niger and Chad, where France has a sizeable military presence, are part of the “G5 Sahel” group, which has faced a rise in attacks in recent days.

Homage at the Shrine
On Tuesday night, Macron heads to Lagos, where the agenda will be less traditionally diplomatic, with a focus more on the megacity of 20 million people’s thriving artistic and cultural scene.

He was expected to officially launch the African Cultural Season which takes place in France in 2020, at an event showcasing music, fashion and theatre.

The choice of location — the Shrine concert venue of Afrobeat legend Fela Kuti — is a surprise for many Nigerians given its association with the anti-establishment musician.

No elected president is believed to have officially visited the spiritual home of the so-called “Black President”, which is more synonymous with marijuana smoke and gyrating dancers than diplomatic niceties.

Macron revealed he had been to the Shrine before for a concert by Fela Kuti’s son, Femi. “It’s an incredible, vibrant place.”

Workers were seen repairing the potholed approaches to the ramshackle venue in preparation for Macron’s arrival, as the Lagos state authorities shut down roads as a security precaution.

“But it didn’t come as a shock, knowing that France is a very cultural country and knowing that Macron is a young president.”