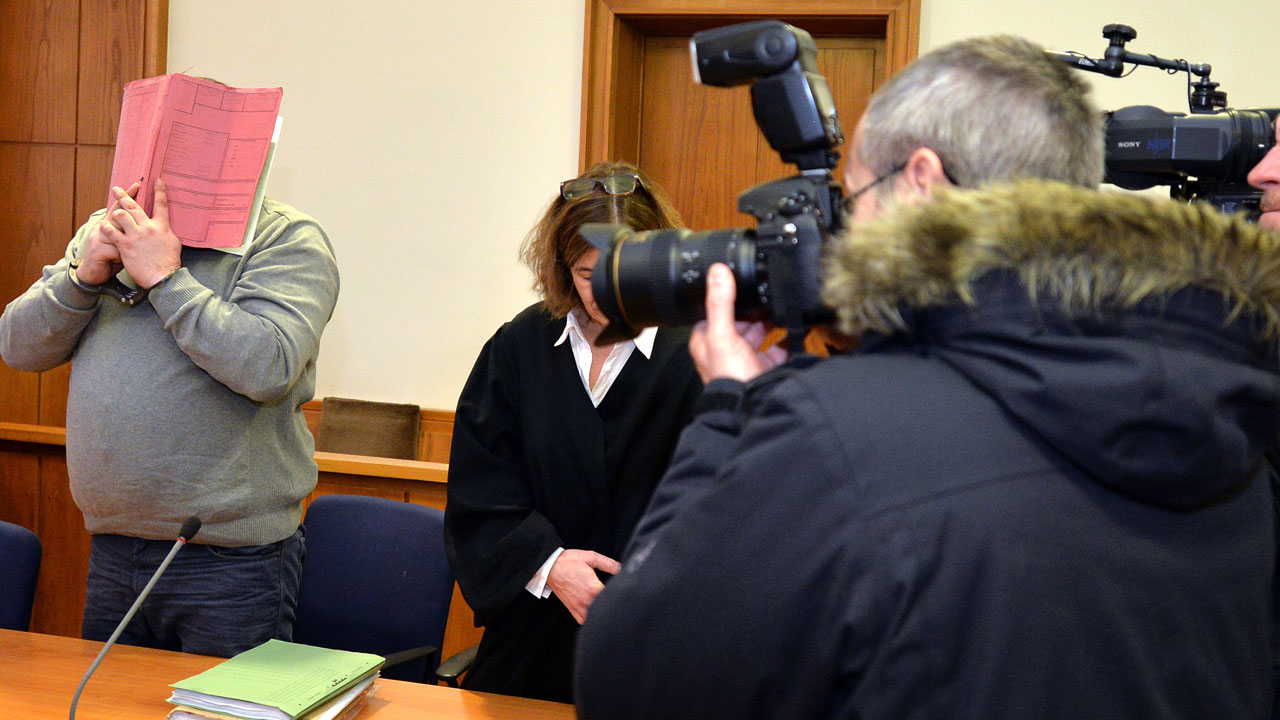 (FILES) In this file photo taken on February 26, 2015 German former male nurse Niels Hoegel (L) hides his face behind a folder as he waits for the opening of another session of his trial at a court in Oldenburg, northwestern Germany. German nurse Niels Hoegel, already serving a lengthy term for previous killings, will go on trial before anguished relatives on October 30, 2018 over the murders of around 100 more people — a spree prosecutors say is unprecedented in the post-war period. CARMEN JASPERSEN / DPA / AFP

Former nurse Niels Hoegel, accused of killing more than 100 patients in his care, will go on trial Tuesday in the biggest serial killing trial in Germany’s post-war history.

Hoegel, 41, has already spent nearly a decade in prison for other patient deaths, and is accused of intentionally administering medical overdoses to victims so he could bring them back to life at the last moment.

He is to face questioning before dozens of victims’ anguished loved ones who still hope to learn the full scope of his murder spree.

The trial in Oldenburg, northern Germany, is set to last until at least May, with the first hearing to focus on prosecutors presenting their case.

Hoegel, who is already serving a life term, has confessed to dozens of killings.

Investigators say at least 36 patients were killed at a hospital in Oldenburg where he worked, and about 64 more at a clinic in nearby Delmenhorst, between 2000 and 2005.

“I hope he will be found guilty on each count so that the loved ones can finally find some closure,” said Petra Klein, who runs the local chapter of the victims’ aid group Weisser Ring.

Around 126 relatives will be co-plaintiffs in the new trial and are expected to fill the specially designated courtroom in Oldenburg, along with about 80 journalists.

More than 130 bodies of patients who died on Hoegel’s watch have been exhumed, in a case investigators have called “unprecedented in Germany to our knowledge”.

‘Like a drug’
Caught in 2005 while injecting an unprescribed medication into a patient in Delmenhorst, Hoegel was sentenced in 2008 to seven years in prison for attempted murder.

A second trial followed in 2014-15 under pressure from alleged victims’ families, who accused prosecutors of dragging their feet.

He was found guilty of murder and attempted murder of five other victims and given the maximum sentence of 15 years.

It was then that Hoegel confessed to his psychiatrist at least 30 more murders committed in Delmenhorst. That prompted investigators to take a closer look at suspicious deaths in Oldenburg.

Investigators say the final toll could top 200 but fear they might never know for sure because the bodies of many potential victims were cremated.

Hoegel appears to have followed a similar procedure each time, first injecting a medication that triggered cardiac arrest, followed by an often futile attempt at resuscitation.

Prosecutors say he was motivated by vanity, to show off his skills at saving human lives, and by simple “boredom”.

The choice of victim appears to have been entirely random, with their ages ranging from 34 to 96.

Killing in itself was never his aim, according to one psychologist who evaluated him.

When he managed to revive a patient, he was sated, but only for a few days, the expert said, before adding: “For him, it was like a drug.”