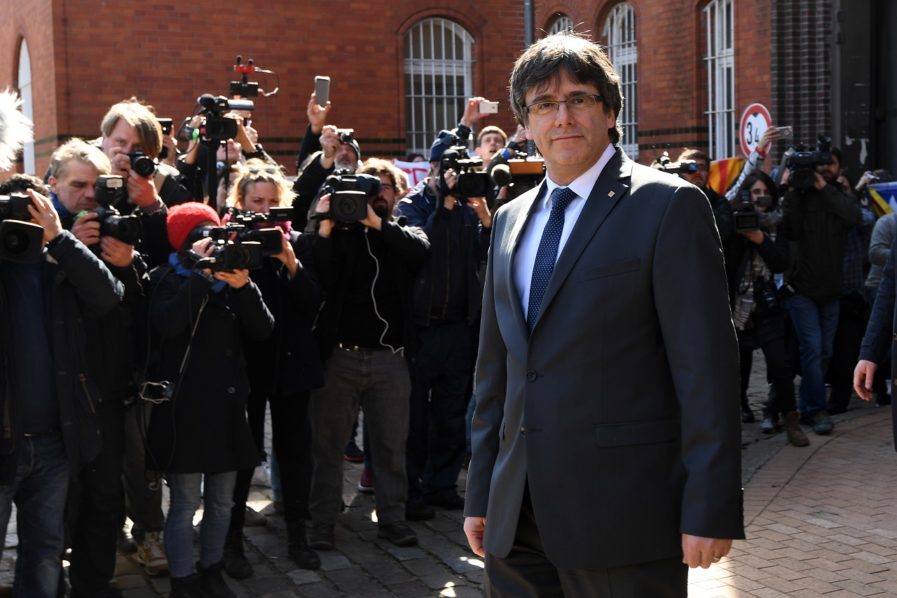 (FILES) In this file photo taken on April 6, 2018, Catalonia’s ousted leader Carles Puigdemont leaves the detention centre (Justizvollzugsanstalt, JVA) of Neumuenster, northern Germany, after judges refused his extradition to Spain on a rebellion charge and ordered him freed on bail pending a ruling on a lesser corruption charge. Germany’s federal prosecutors said on June 1, 2018 they have filed a formal request to extradite deposed Catalan leader Carles Puigdemont to Spain, where he faces charges of rebellion and corruption. / AFP PHOTO / Patrik STOLLARZ

Germany’s federal prosecutors said Friday they have filed a formal request to extradite deposed Catalan leader Carles Puigdemont to Spain, where he faces charges of rebellion and corruption.

“The material delivered by the Spanish authorities is not contradictory, but clearly shows that the violence in Catalonia on election day can be attributed to the wanted individual,” prosecutors said in a statement, defending the controversial rebellion charge.

A final decision on whether Puigdemont would be sent back to Spain would still have to come from the court.

Puigdemont was detained in Germany in late March on a European arrest warrant from Spain for his role in Catalonia’s failed independence bid last October.

He had been living in self-exile in Belgium since then but was travelling through Germany when he was arrested.

Madrid wants Puigdemont to return to Spain so he can face trial for alleged rebellion, which carries a sentence of up to 30 years.

A court in Schleswig-Holstein had released him on bail on April 6 after finding that he could not be extradited for rebellion — which is not punishable under German law.

The court argued that the closest legal equivalent, high treason, did not apply because Puigdemont’s actions were not accompanied by violence.

Following the federal prosecutors’ formal application for Puigdemont’s extradition, the court will now have to examine whether to approve his return to Spain.

Even if judges again reject the rebellion charge, Puigdemont could still be sent home to be tried for the embezzlement of public funds, a lesser charge related to the cost of staging the Catalan referendum.

With his legal woes preventing him from being re-appointed president of Catalonia, Puigdemont last month anointed a handpicked successor, helping the region to come closer to ending the crisis.

On Tuesday, Catalonia’s separatist president named an administration without detained or exiled former ministers, paving the way for Madrid to end its direct rule over the northeastern region.