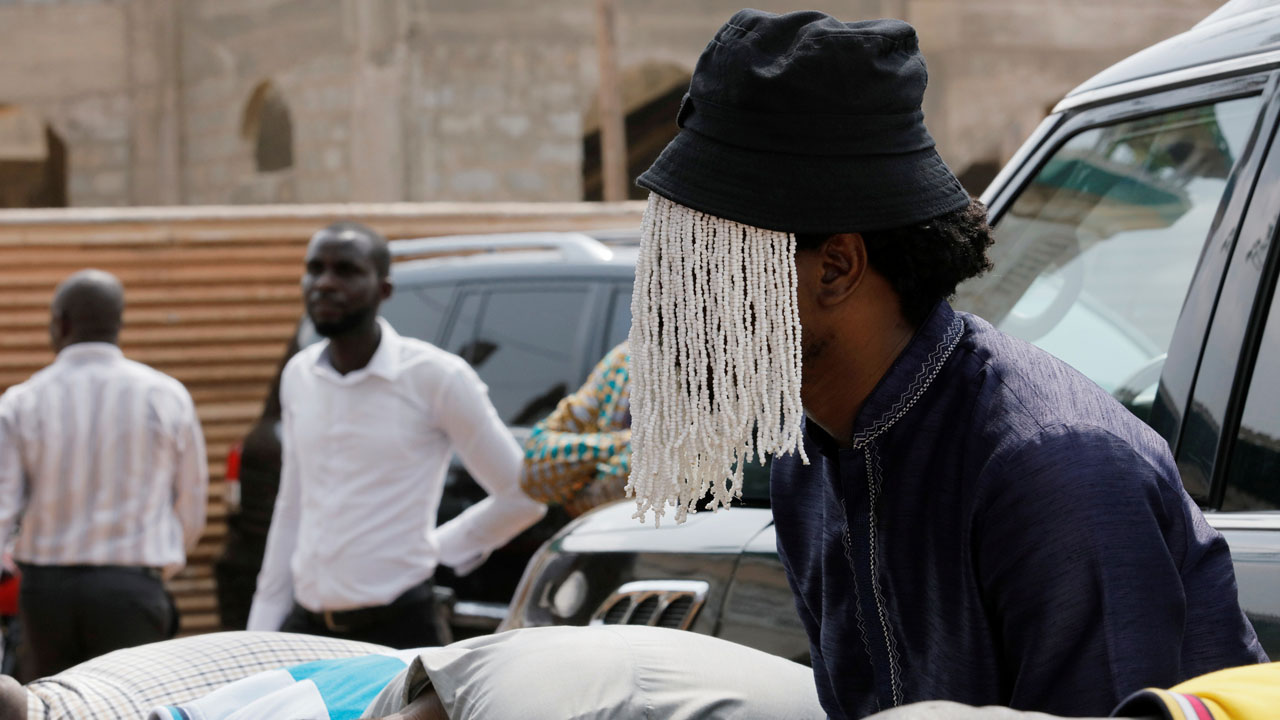 Undercover journalist Anas Aremeyaw Anas prays with others for his slain colleague Ahmed Hussein-Suale, an investigative journalist who was killed by gunmen on Wednesday, at Madina Central Mosque in Accra, Ghana January 18, 2019. REUTERS/Francis Kokoroko

Ghana’s reputation as a beacon of media freedom in an otherwise turbulent region has come under threat following a spate of attacks on journalists.

Earlier this month, reporter Raissa Sambou was rushed to hospital after allegedly being assaulted by police in the capital Accra. Two of her colleagues were also attacked.

Ghana prides itself as being one of the most stable democracies in West Africa.

The West African nation is ranked 23rd in the 2018 World Press Freedom Index — first place in Africa, and higher than Spain, France, Britain and the United States.

But that high ranking is now in jeopardy.

Muheeb Saeed, a programme officer with the Media Foundation of West Africa (MFWA), said they were “deeply concerned” about the latest attacks.

“It has the potential to induce self censorship amongst journalists and thereby kill the fight against corruption,” he told AFP.

The most notorious case involves the January murder of Ahmed Hussein-Suale. He worked for Tiger Eye, which exposed deep-seated corruption in West African football and Ghana’s judiciary.

Other attacks include the 2015 murder of a radio reporter and another alleged assault by police in 2018, which left photographer Latif Iddrisu with a fractured skull.

‘Barbaric’
The Ghanaian Times reporters said they were attacked for filming an altercation with the police over a traffic offence in the capital on March 14.

One of them said he was beaten and left injured in a cell, before eventually being taken to hospital.

Sambou, who is recovering from a Caesarean section, was allegedly hit in the stomach and required medical treatment.

The editor of the Ghanaian Times, David Agbenu, said he had never seen such a level of violence against the media in his 26 years’ experience.

The Ghana Journalists Association said it considered the assault “barbaric in an era of rule of law when the police are supposed to be law enforcers rather than law breakers”.

“This incident must not be added to the list of unresolved cases of assault against journalists by police officers. This culture of impunity must end now!” it added.

“Twenty-seven years (since the end of military rule), it is important for the police to appreciate that we live under the rule of law and not the rule of the jungle.”

On Wednesday, the police said three officers accused of involvement in the attack had been suspended. The publication wants police to bring criminal charges.

Rare prosecutions
But lawyer Samson Anyenini said securing a criminal prosecution against the police was rare in Ghana.

“Oftentimes we do not have so much trust in the criminal process,” he said, adding that civil cases seemed a more reliable way to secure justice in attacks on the media.

“The state is not interested in pursuing its own people,” said Anyenini, who has represented the media in civil cases against the state.

He is planning to sue the police on behalf of photographer Iddrisu and his company. The Ghanaian Times is also looking to bring a civil case.

According to local media, there have been no criminal prosecutions in more than 20 attacks against the press by police and the military since 2006.

Many of the incidents appeared to be around journalists filming or photographing security personnel on the job.

Ghana Police spokesman David Eklu said these reports were “a major issue of concern” but pointed out that there were often no complaints filed.

While there is no law preventing the filming of police on duty in Ghana, Eklu said this was a “grey area” with concern about privacy and fears videos would be doctored.

The Committee to Protect Journalists (CPJ) Africa researcher Jonathan Rozen said it was investigating reports of the latest “violent altercation”.

“Press freedom in Ghana cannot flourish when journalists are repeatedly attacked and impunity prevails,” he added.

Hussein-Suale’s boss, Anas Aremeyaw Anas said he had become disillusioned with the hunt for his slain colleague’s killer that he had started his own probe into the shooting.

The distinctive undercover reporter, who never appears in public without his face covered, accused the police of “apathy”.

“People are not forceful enough,” he said in an interview with the International Press Institute, suggesting powerful figures in football were “making sure that we don’t find the killer”.