.Adds being alive is better than ancestral attachment to land
•History will judge us harshly if killings persist — Dogara
•Insecurity threatens 2019 elections — CAN
ABUJA—The Presidency, yesterday, charged those against the administration’s ranching and colony programmes for herdsmen to rethink, noting that they are better off living with the ranches and colonies than dying through the persisting conflicts. 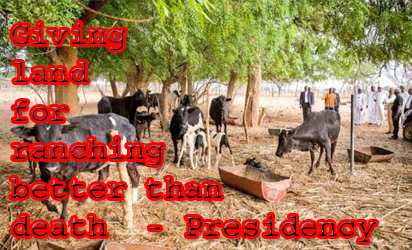 The exhortation from the Presidency came on a day Speaker of the House of Representatives, Yakubu Dogara, said that history would be harsh on the present administration if it failed to stop the mass killing of innocent Nigerians.

This is even as the Christian Association of Nigeria, CAN, in the 17 Southern states yesterday said the insecurity pervading the country, particularly in the North Central zone, poses grave danger to the conduct of next year’s general elections.

Special Adviser to the President on Media and Publicity, Chief Femi Adesina, gave the admonishment as he alleged a conspiracy by alleged critics of the administration to frustrate moves towards resolving the crises in the country.

Adesina, who spoke on AIT morning programme, said it was wrong to describe the attacks against farmers as one directed against Christians.

“What is happening is criminality, pure and simple, and it must be brought to an end. Government has a big role to play in this but the people themselves have a role to play.”

Noting what he described as a campaign to stop the implementation of the administration’s plans to check the farmers-herders conflict, Adesina said: “Some people are saying don’t use government money to build ranches. If truly they don’t have lands, that is fine, but remember that Kogi State offered 15,000 hectares of land for cattle colony and in the midst of that offer vicious attacks were unleashed.

“The National Economic Council that recommended ranching didn’t just legislate it, there were recommendations.

“So, if your state genuinely does not have land for ranching, it is understandable; not every state will have land for ranches. But where you have land and you can do something, please do for peace. What will the land be used for if those who own it are dead at the end of the day?”

Adesina further said the administration is doing its best to ensure peace throughout the country.

“There are different theatres of crises in the country and you may look at each theatre with its peculiarities. In the Middle Belt, it has its own peculiarities and what is the peculiarity of that, Farmers-Herders conflict. What has the government done?

“It has sent in security agencies starting with the police, later troops, later different operations by the military,” he said.

History will judge us harshly if…— Dogara

Meanwhile, Speaker of the House of Representatives, Mr Yakubu Dogara, said yesterday that history will be hash on the present administration if it failed to stop the mass killing of innocent Nigerians.

Dogara, who stated this while welcoming members back from the Eid- El- Fitr holiday, said the killing of innocent Nigerians should be stopped immediately.

He said: “History will have a harsh verdict for us as a government if we fail to live up to this responsibility and it will not matter if we succeed in other areas.

“Unfortunately, the stark reality now is that our citizens are fast losing confidence in our security system.

“This must not be the case. Before we ebb to the realm of anarchy, we must rise as true representatives of the Nigerian people to salvage the situation and defend our hard won democracy.”

Dogara said the unresolved issue of rampant killings of defenseless people, including innocent and vulnerable children and women, in various parts of the country, called for sober reflection.

He added that there must be more concerted efforts by the National Assembly to exploit all its constitutional powers and privileges to ensure the protection of lives and property in the country by security agencies.

Also yesterday Christian Association of Nigeria, CAN, in the 17 southern states said the rise in insecurity pervading the country, particularly in the North Central zone, posed grave danger to the conduct of next year’s general elections.

CAN in the region did not only bemoan the menace but also said it was a sign of total collapse of the security architecture in Nigeria.

It said with such situation, the conduct of the 2019 election was under serious jeopardy.

CAN spoke as reactions continued to trail the killing of over 100 residents of Plateau State by suspected herdsmen.

Secretary of the group, Dr. Joseph Ajujungwa, who spoke to newsmen in Enugu, said the Christian body was worried that several days after the attack, no concrete effort had been made towards arresting the perpetrators.

He said:  “CAN is saddened that many days after that avoidable massacre of innocent Nigerians in Plateau State, government is still telling the same old-fashioned stories.

“For every murderous act of these marauders, the Federal Government and the security agencies reel out words of assurance that never yield any fruit.

“We restate once again that the incessant, senseless and wicked killings going on in the Middle Belt and South-East is totally unacceptable to us.”

Ajujungwa said it was more lamentable that whereas government had never prosecuted any of the AK-47 wielding-herdsmen, who had murdered hundreds of Nigerians, it rushed to convict to death, five Christians for allegedly killing one of the attackers.

“There is grave injustice in this country and they are not even pretending about it. These people are using AK 47, killing everybody; almost 200 were killed in Jos but the police never arrested any, army never arrested any, and we are saying there is security? There is no security in Nigeria,

“We are calling on the Federal Government; if we have security, let them rise to the challenge. This is not good for this democracy, especially at a time we are preparing for election and such thing is happening, I don’t think it is in the best interest of Nigeria. It is putting the election in jeopardy.”