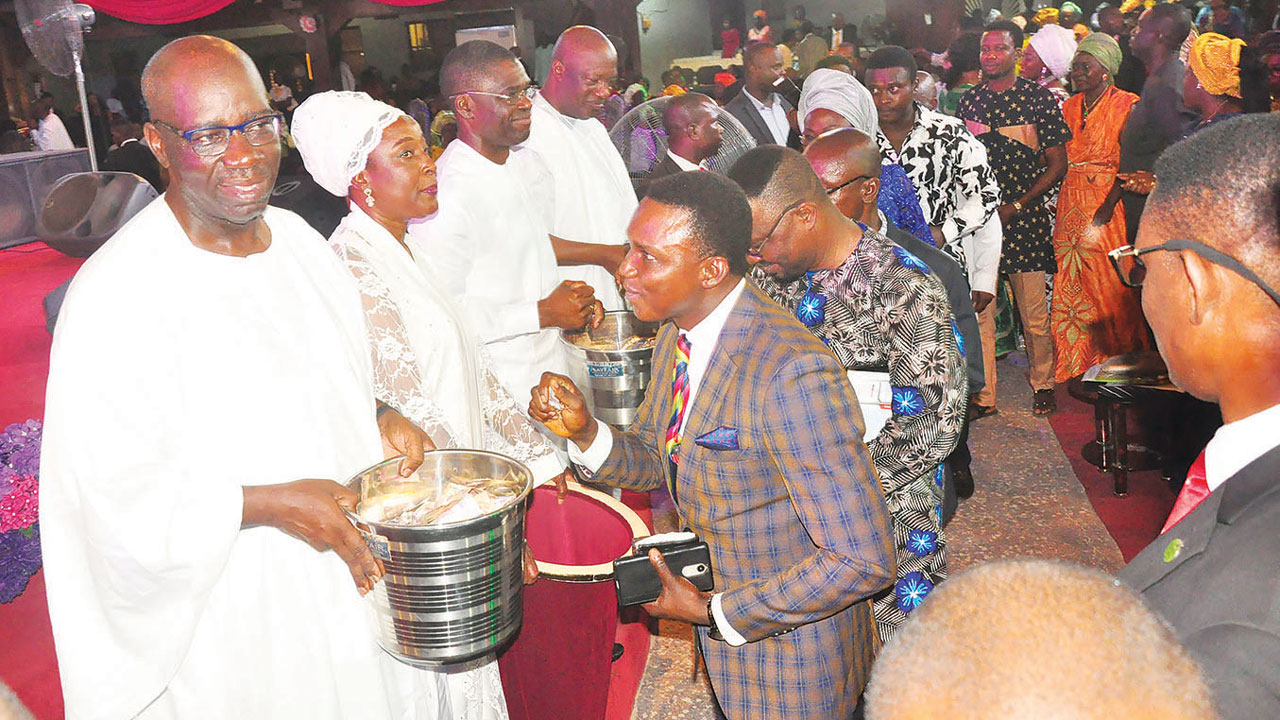 • Supports fight against impunity, others
• Pledges priority attention to women
Edo State governor, Godwin Obaseki, has disclosed that God and the people were the pillars of his government, which he said was doing better than distributing funds to a few cronies, because of his commitment to development.

The governor said this yesterday during the Alaghodaro Thanksgiving Service at the Church of God Mission International (CGMi), Faith Arena, in Benin City, to mark his two years in office.He added that his emergence as a governor was God’s wish.

This followed endorsement of the various reforms initiated by his administration in critical sectors such as education, healthcare and job creation.The endorsements came the president, Pentecostal Fellowship of Nigeria (PFN) Rev. Felix Omobude; the archbishop of CGMi, Dr. (Mrs.) Margaret Idahosa; and Kure.

He expressed support for the fight against impunity initiated by the chairman of the All Progressives Congress (APC), Adams Oshiomhole.He said that some chieftains of the party were against Oshiomhole for fighting impunity and keying into the change mantra of the party.

“Many Nigerians, under the Muhammadu Buhari-led administration are afraid to commit financial crimes because they know there would be consequences for their illicit activities,” he added.

He stated that his predecessor, Oshiomhole, was trying to instil a regime of change where nobody is above the law, adding that Nigerians would soon begin to feel the impact of “fundamental changes Buhari is making.”

In the same vein, the state chairman of the Christian Association of Nigeria (CAN) Bishop Oyonude Kure, urged Obaseki to tackle insecurity and fix roads in the state.

In another vein, the governor described women emancipation and empowerment as key in his agenda. He said his administration would give females priority attention to drive the socio-economic growth and development of the state.The governor made the remark at the weekend in Benin City during the 2018 Alaghodaro Edo Women Summit, which attracted women from the 18 councils of the state.

Irrespective of religion, ethnicity or political affiliation, the women pledged their support for the Obaseki-led administration.The Commissioner for Women Affairs and Social Development, Magdalene Ohenhen, said that women had been entrusted with 120 key appointive and elective positions and assignments in the Obaseki government.

Organising Secretary of the All Progressives Congress (APC), Dr. Aisosa Amadasun, urged the women to continue to support the government, adding that the bold and pragmatic steps taken by the governor towards women empowerment not only gave women in the state a sense of belonging, but also served as a catalyst to harness their potentials for the socio-economic and political development of the state.

Amadasun, who commended the governor on the appointment of 18 women as special assistants and one as special adviser on gender equality, described the feat as novel.

Appreciating the women for their support, wife of the governor, Betsy Obaseki, accompanied by the deputy governor’s wife, Maryann Shaibu, sued for sustained support for the government of APC.