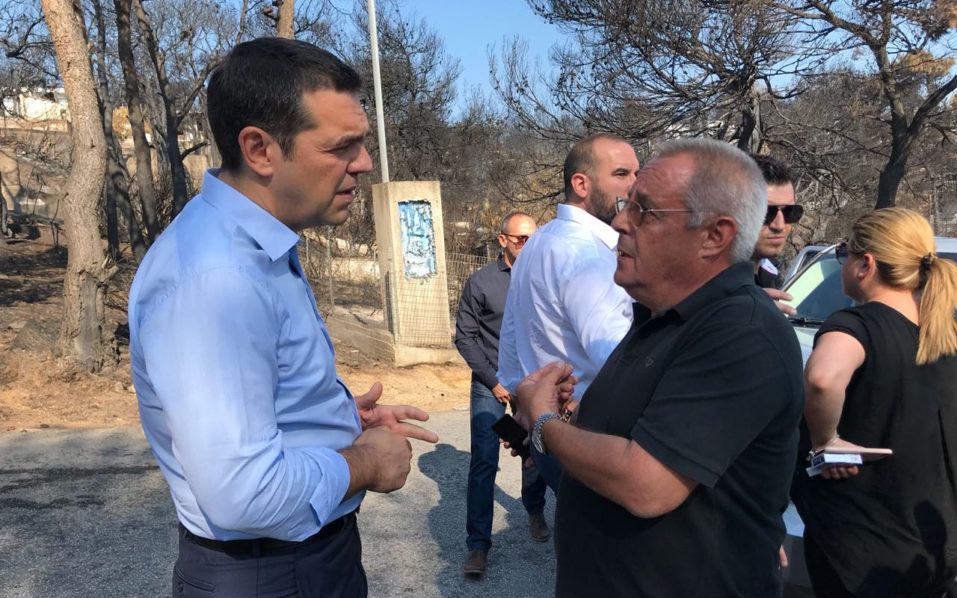 A handout made available by the Greek Prime Minister’s office on July 30, 2018, shows Greek Prime Minister Alexis Tsipras visiting the area ravaged by the country’s worst ever wildfires as anger mounts over his government’s response to the disaster which has claimed scores of lives. His trip, a week after the fires broke out, was not announced beforehand in what local media said was a bid to avoid protests by residents of the hard-hit seaside communities east of Athens — Mati and Rafina.The current death toll of 91 was expected to rise after the coastguard said another body was found underwater near a beach in the affected area. / AFP PHOTO / GREEK PRIME MINISTER’S PRESS OFFICE

“What’s important today is to objectively investigate the causes of the tragedy, and take all necessary measures so that it does not happen again,” Tsipras said in a televised speech as he announced a 500-million-euro ($578-million) revamp backed by European support funds.

“I am determined to do that,” he said.

Tsipras’ government has been severely criticised over its response to the July 23 wildfire in the coastal resort of Mati, the deadliest in Greek history.

The disaster has been followed by infighting between the police and the fire brigade, who initially insisted that the state response had been well-managed and blamed the high death toll on winds of up to 120 kilometres (75 miles) an hour.

Local residents received no warning and instead of being sent away from the fire zone, many passing drivers were mistakenly diverted into its path and died trapped in Mati’s narrow streets.

It later emerged that the police had failed to properly seal off the area because the fire brigade had not alerted them to the location and size of the fire.

And survivors fleeing the flames with just the clothes on their backs said they were left unaided on beaches for hours, where many died of burns and smoke inhalation.

The death toll rose to 93 on Thursday after two more people died in hospital.

Another 34 people are still hospitalised after the July 23 wildfire in Mati, six of them in critical condition.

Four senior officials including the minister responsible for the police and the heads of the police and fire brigade have been removed from their posts.

Tsipras on Thursday said he had approached a senior forest research scientist at the Max Planck Society to head an independent investigation into the causes of the fire, and recommend courses of action.

“Nothing can be forgotten, nothing should be covered up,” he said.

Earlier this week the PM said about 3,200 illegal buildings blocking access to roads, flood channels and the coast in the greater Attica region would be demolished.

A Greek judicial investigation into possible faults by state officials is also under way.

The relatives of two people who perished in the fires have also sued the authorities for negligence and exposure to danger.