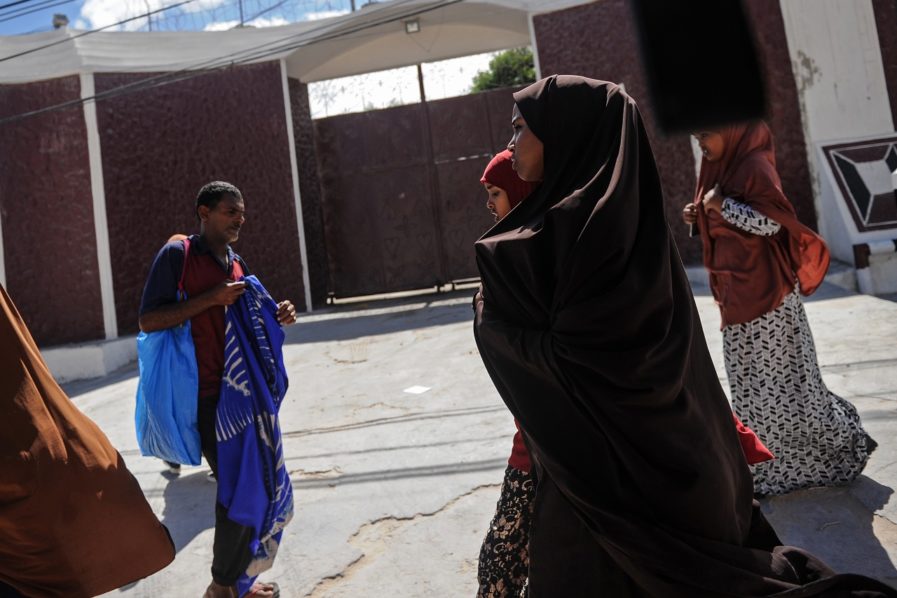 People walk in front of the compound of the International Committee of the Red Cross (ICRC) where armed men kidnapped a German nurse on May 3 evening in Wadajir district of Mogadishu, on May 3, 2018. The Red Cross said the attack happened around 8.00 pm local time (1700 GMT) when unidentified armed men entered its compound in Mogadishu, adding it is “in contact with various authorities to try and secure her release”. People working for the Red Cross in Somalia told AFP the gunmen appeared to have evaded the compound’s security guards and snuck the nurse out through a back entrance into a waiting vehicle. / AFP PHOTO / Mohamed ABDIWAHAB

Armed men abducted a German nurse working for the International Committee of the Red Cross from a compound in Somalia’s capital Mogadishu in what the government said Thursday was believed to be an inside job.

The Red Cross said the attack happened around 8.00 pm local time (1700 GMT) on Wednesday evening when unidentified armed men entered its compound, adding it was “in contact with various authorities to try and secure her release”.

“We are deeply concerned about the safety of our colleague,” said Daniel O’Malley, ICRC’s deputy Somalia head.

“She is a nurse who was working every day to save lives and improve the health of some of Somalia’s most vulnerable people.”

Red Cross staff in Somalia told AFP the gunmen appeared to have evaded the compound’s security guards and snuck the nurse out through a back entrance into a waiting vehicle.

Security ministry spokesman Abdiaziz Ali Ibrahim said initial investigations showed “one of the security guards of the compound was involved in the kidnapping.”

“The security forces have tracked the kidnappers and founded an abandoned vehicle that was used in the kidnapping mission.”

A witness, who lives near the ICRC compound, told AFP: “One of the security guards assisted the kidnappers to take the lady, a vehicle was waiting outside.”

Ibrahim said the vehicle was abandoned after breaking down, and witnesses told AFP the car had a punctured tyre.

It was unclear whether the kidnappers had managed to leave Mogadishu with their hostage.

A local ICRC employee, speaking on condition of anonymity, said two other foreign staff members had been evacuated along with senior Somali staff.

The abduction is the second attack on ICRC employees in Somalia in just over a week.

Abdulhafid Yusuf Ibrahim, a Somali national who had worked for the group for only five months, died on March 25 after an improvised bomb exploded beneath his car as he left the ICRC office.

Bombings, assassinations, abductions
Unlike many other international aid agencies working in Somalia, the ICRC does not base itself within the well-defended perimeter of Mogadishu’s airport, which is protected by African Union soldiers.

The airport acts as the city’s “Green Zone” housing foreign embassies and the United Nations which coordinates the humanitarian and political responses to Somalia’s crises.

Germany’s Foreign Minister Heiko Maas, who is visiting Ethiopia and Tanzania this week, told journalists in Addis Ababa he would not comment “on any hostage cases”.

“I have deep respect for all people, especially people from Germany, working abroad in order to help others,” Maas added.

Somalia, which collapsed into civil war in 1991 and has been the site of an Al-Qaeda-linked Islamist insurgency since 2006, is one of the most dangerous countries for aid workers, but abductions remain relatively unusual.

In the past, foreigners, including journalists and aid workers, have been kidnapped by armed gangs or Shabaab militants and held for ransom, sometimes for years at a time.

Terrorist bombings and assassinations are common and frequently claimed by the Shabaab which is fighting to overthrow the internationally backed government in Mogadishu.

International aid agencies, including the independent Switzerland-based ICRC, provide health care and other basic services in the war-torn country and are regarded as supporters of the government by the Shabaab and as a ready source of income by other militants and armed gangs.

On Tuesday a local employee of the World Health Organization (WHO) was shot in Mogadishu.

The WHO said in a statement Wednesday it was “shocked and saddened” by the killing of Mariam Abdullahi Mohamed, “a dedicated frontline worker”.

Between 2008-12 piracy off the coast of Somalia became a big business with crew members and their ships held for million-dollar ransoms, but in recent years attacks have become rare.

Gradually improving stability in Somalia allowed the holding of limited elections in 2016, but insecurity remains widespread.

In October, Somalia suffered its deadliest-ever bombing, with over 500 people killed in an attack blamed on the Shabaab.