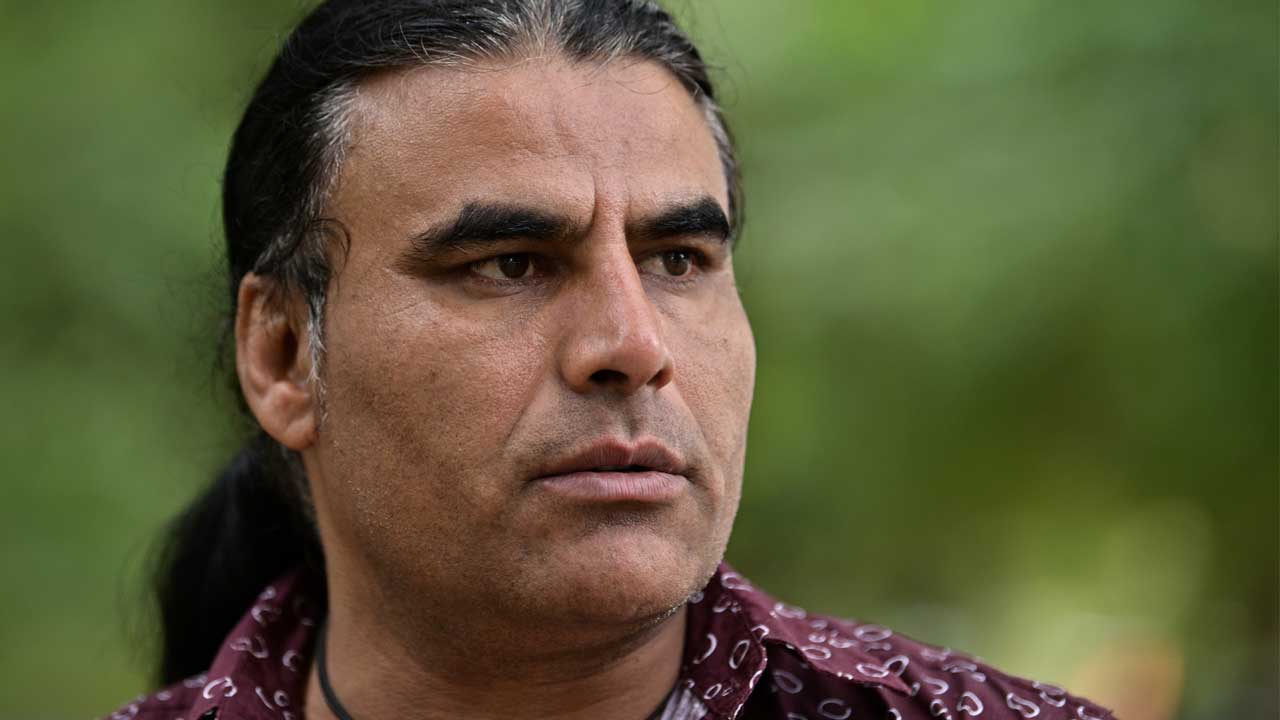 Afghan refugee and local resident Abdul Aziz (L), 48, looks on during an interview with AFP in Christchurch on March 17, 2019, two days after he chased a gunman during a shooting incident at the Linwood Mosque in the city. When Afghan refugee Abdul Aziz saw a man brandishing a gun outside his mosque in Christchurch, he ran towards the attacker armed with the only weapon he could find — a hand-held credit card machine. Anthony WALLACE / AFP

When Afghan refugee Abdul Aziz saw a man brandishing a gun outside his mosque in Christchurch, he ran towards the attacker armed with the only weapon he could find — a hand-held credit card machine.

Seven people were killed when a white supremacist stormed Linwood Masjid — the second mosque he attacked on Friday — as worshippers knelt to pray.

But the death toll could have been much higher if not for the heroic actions of Aziz, an Australian citizen, whose efforts to distract and chase the gunman away have attracted widespread praise.

“You don’t have much time to think, whatever you think of, you just do it, you know,” Aziz told AFP, brushing off the “hero” tag as local Muslims gathered to thank him for saving relatives and friends.

“I just wanted to save as much lives as I could, even if I lose my life.”

Aziz and his four sons were worshipping at the mosque when they heard the loud cracks of gunfire outside the building.

Initially thinking someone was setting off firecrackers, Aziz became suspicious and ran out of the mosque, grabbing a small credit card processing device.

Outside, he was stunned to find an armed man wearing military-style fatigues.

“At first, I didn’t know if he was the good guy or the bad guy. But when he started swearing, I knew he was not the good guy,” he said.

Aziz hurled the machine at Tarrant and then ducked between cars as the self-confessed fascist unleashed a barrage of shots at him.

Aziz then heard one of his sons call out, “Daddy, please come back inside!”

Unhurt, he picked up an empty shotgun the gunman had discarded and shouted “come on here” repeatedly in an effort to draw him away from his sons and the other worshippers.

“When he see the gun in my hands, I don’t know what happened, he dropped the gun and I chased him with my own gun… I managed to throw the gun on his car and smash the car window, and I could see he was a bit frightened.”

The 48-year-old kept chasing the attacker as he sped off in his car. The gunman was apprehended by two armed police officers soon afterwards.

Aziz returned to the mosque where he was met by scenes of carnage. Dead bodies were strewn around the mosque, among them his close friends.

“When I close my eyes, I still see bodies everywhere,” he said. “We are all still in shock, but what can you do. You cannot bring them back.”

Then came another shock.

Aziz said police who arrived after the shooting blocked him from re-entering the mosque, thinking he might have been the gunman as he was seen earlier with the weapon.

“For a long time, I didn’t know if my kids were alive or dead or injured because I couldn’t go inside the mosque,” Aziz said. He later found out all his sons had survived.

Aziz arrived in Australia as a child refugee. He lived in Sydney for almost three decades before moving to Christchurch two-and-a-half years ago.

He says he has nothing but contempt for the attacker.

“A lot of people tell him he is a gunman. But… a man never hurts anybody. He is not a man — he is a coward,” Aziz said.

He said he was overwhelmed by the outpouring of support from his neighbours after the attacks.

“There’s very nice people around here. When I went home last night, my wife told me all the neighbours, they sent flowers… cards, foods, cakes. They showed all their love.