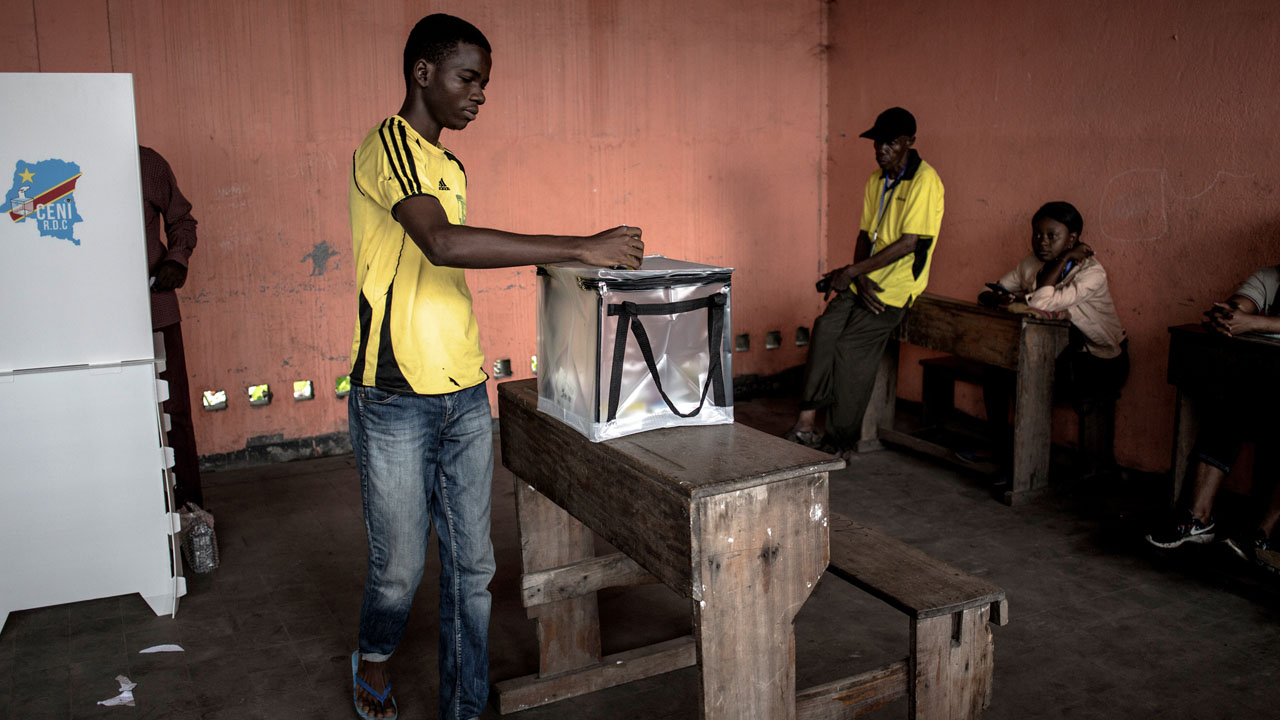 (FILES) In this file photo taken on December 30, 2018 a voter casts his ballot at a polling station in the popular district of Victoire, in Kinshasa, during the DR Congo’s general elections. – The United States on January 3, 2019 demanded that the Democratic Republic of Congo release “accurate” election results, warning of sanctions on anyone who undermines the fledgling democracy. “On December 30, millions of Congolese went peacefully to the polls. Now is the time for (authorities) to affirm that these votes were not cast in vain by ensuring the accurate reporting of election results,” State Department spokesman Robert Palladino said in a statement. (Photo by JOHN WESSELS / AFP)

Hopes rose on Wednesday that the Democratic Republic of Congo’s election saga may have turned a corner after opposition leaders reached out to President Joseph Kabila.

The country is in flux over a thrice-delayed presidential vote, with the announcement of official results now postponed, stoking suspicions of rigging.

But on Tuesday, the head of the Independent National Electoral Commission (CENI) said the panel hoped to complete the count within 48 hours.

“It is a huge task that we can’t finish in just a few hours,” CENI President Corneille Nangaa told AFP, referring to logistical problems in the vast central African country.

“The CENI plans to devote 24 to 48 hours to this task, after which time the CENI will schedule the announcement of the provisional results,” he said.

According to the initial timetable, after provisional results are released, definitive results are due on January 15 with the swearing-in of the new president three days later.

Further pressure on CENI to reveal the election outcome came on Wednesday from South Africa and Zambia, DRC’s neighbour to the south.

“The delay in releasing the results of the elections can lead to suspicions and compromise peace and stability of the country,” said a joint statement by South African President Cyril Ramaphosa and Zambian counterpart Edgar Lungu.

After deploying tens of thousands of its own election observers, the powerful Catholic Church last week said it knew the outcome of the ballot and called on the authorities to reveal the result “in keeping with truth and justice”.

Bloody past
Kabila, 47, was due to step down two years ago but clung on to office, sparking widespread protests that were repressed at the cost of scores of lives.

The bloodshed revived traumatic memories of the DRC’s brutal past.

The mineral-rich country has never had a peaceful transition of power since it gained independence from Belgium in 1960.

Bloody clashes marred elections in 2006 and 2011, and two wars between 1996 and 2003, drawing in armies from around the region, claimed millions of lives.

Kabila last year announced he would step down after 18 years in power and then hand-picked a loyalist, former interior minister Emmanuel Ramazani Shadary, to be his party’s candidate in the December 30 poll.

The choice fuelled accusations that Kabila — concerned about possible retribution — would use Shadary to protect his interests after the vote.

Overtures
On Tuesday, though, the opposition hinted at a rapprochement.

“There’s no spirit of revenge,” said Felix Tshisekedi, the candidate of the longtime opposition UDPS party.

He also told the Belgian newspaper Le Soir that Kabila could be honoured for ushering in a peaceful transition.

“One day we will even have to think of paying tribute to him (Kabila) for agreeing to withdraw,” Tshisekedi said in an interview.

Kabila and Tshisekedi “have an interest in meeting to prepare a peaceful and civilised transfer of power,” said UDPS Secretary General Jean-Marc Kabund.

A source close to Tshisekedi said the comments were aimed at “Kabila and the army”.

They seek to reassure the outgoing president that he could retain his assets after a reconciliation commission has done its work, the source said.

The other main opposition candidate, former oil executive Martin Fayulu — who was tipped as favourite in the few pre-election opinion polls — also sounded a conciliatory tone on Tuesday.

“Mr. Kabila is a Congolese citizen. He has a place here in Congo. He will do what he wants. The constitution is clear — he (as former president) will be a senator for life. The keyword for us is: There’s no revenge.”