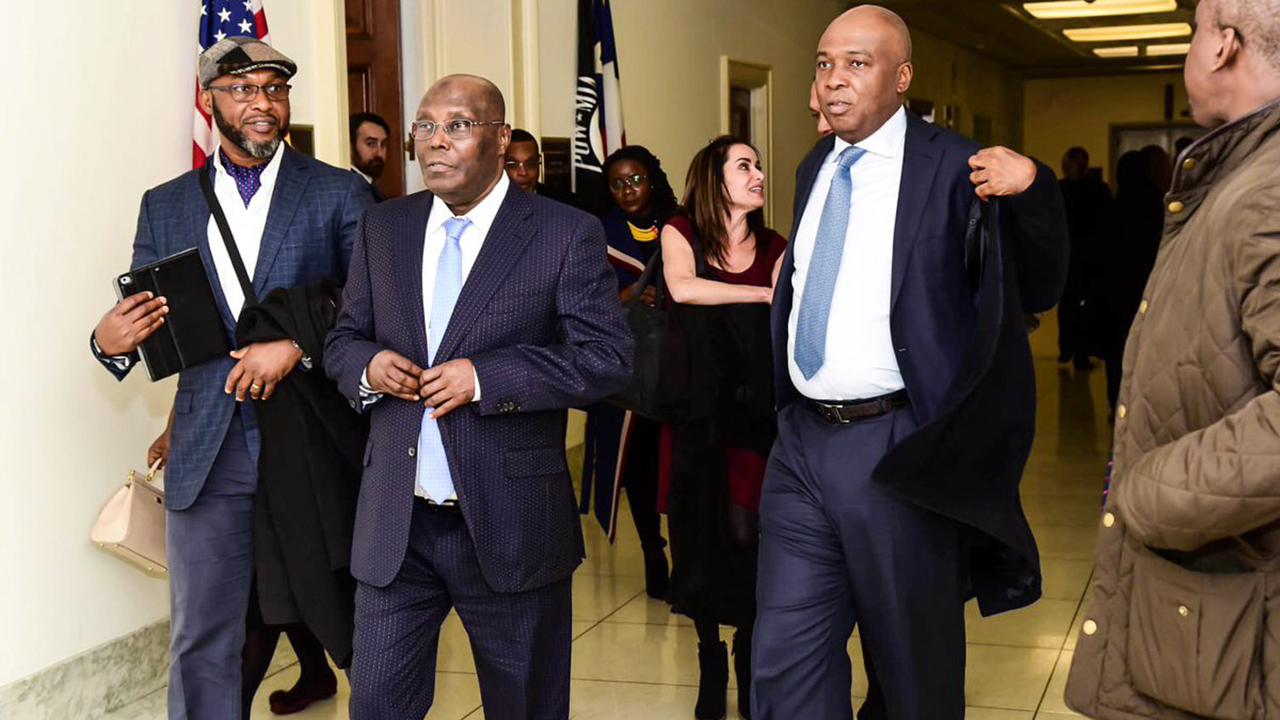 The People’s Democratic Party candidate, Alhaji Atiku Abubakar, secured a visa to the United States for the first time in 12 years after a reported travel ban due to corruption charges. His opposition had latched on to his inability to enter the US as a means of discrediting him.

Following his arrival in the US on January 17, there were so many unanswered questions on how he was able to waive the ban.

Some reports emerged that the former vice president travelled as an aide to Senator Bukola Saraki for a US Chamber of Commerce event.

However, Reuters have exclusively revealed that Atiku secured a visa to the country with the help of two U.S. lobbying firms.

Prior to Atiku’s travel, minister of information, Lai Mohammed, aware that a visa for the former vice president could affect the outcome of the elections, warned the US to be neutral and not to take a decision that will give the impression that they are endorsing one candidate over the other.

“Impression must not be created that the US government is endorsing one particular candidate over the other. I am sure you will all recall the Jefferson’s case and the cold $90,000 in fridge,” Lai Mohammed said in November 2018.

The minister of information was referring to one of the two corruption cases that he featured in.

Atiku was allegedly involved in a bribery scandal involving a former US congressman William Jefferson, who is currently serving a 13-year sentence in jail. According to the Federal Bureau of Investigation, $90,000 in cash found in Jefferson’s freezer was intended for Atiku.

Mr Jefferson had told colleagues of his plans to bribe Atiku with as much as $500,000 in cash, in exchange for business favours in Nigeria.

He and his fourth wife Jennifer Douglas, an American citizen, were indicted in a 2010 US Senate committee report titled “KEEPING FOREIGN CORRUPTION OUT OF THE UNITED STATES.” They were accused of transferring over $40 million “suspect funds” to America from offshore accounts between 2002 and 2008.

At least $1.7 million of that money was bribes paid by German technology company Siemens AG, according to Senate investigators. Siemens pleaded guilty to bribery charges in 2008 and agreed to pay a $1.6 billion fine.

Atiku has repeatedly denied any wrongdoing. Neither he nor his wife face criminal charges in the United States.

Findings by Reuters showed the former vice president personally hired Holland & Knight in December to help him secure a visa, in part by enlisting members of Congress to request one on his behalf, according to a lobbyist for the firm. It has been paid $80,000 so far.

Atiku’s political party had also acquired the services of Ballard Partners at a rate of $90,000 per month in September, before he emerged as the party’s candidate, according to a document seen on the US Department of Justice website.

Lobbyists hired by Atiku said they sought to overcome resistance at the State Department by securing support from members of Congress for the visit, as well as arguing that the top U.S. official for African affairs, Assistant Secretary Tibor Nagy, had an obligation to encourage democracy in the seventh most populous country in the world.

The firm’s lobbyists worked to set up a meeting with Nagy, arguing it would show that the United States wanted to encourage free and fair elections in a country where corruption is endemic.

“We are not asking the administration or anyone to take sides, but to merely demand the same level of freeness and fairness,” Ballard lobbyist Jamie Rubin told Reuters.

“Assistant Secretary Nagy was pleased to meet with him and share the U.S. government’s expectations that Nigeria’s elections be free, fair, transparent, and peaceful, and reflect the will of the Nigerian people,” a State Department official said, stressing the department had not requested the waiver.

An anonymous source told Reuters that Atiku was allowed to enter because the United States saw little benefit to creating bad blood with the man who might be the next leader of Africa’s most populous nation and the continent’s biggest oil producer.

Aside from Nagy, Abubakar met with business leaders at the U.S. Chamber of Commerce and at least two Republican lawmakers in the House of Representatives who specialize in foreign affairs, Representative Michael McCaul of Texas and Representative Chris Smith of New Jersey.

Neither requested a visa waiver for Atiku, spokespeople for the two congressmen told Reuters.