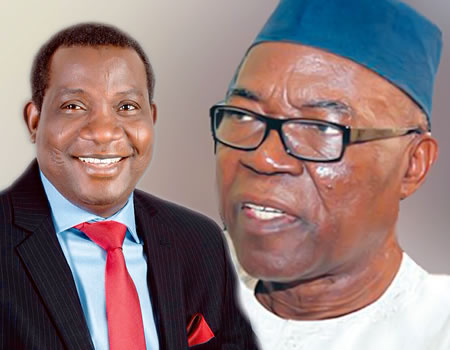 ISAAC SHOBAYO examines the factors that ensured victory for Governor Simon Lalong of the All Progressives Congress (APC) against Senator Jeremiah Useni of the Peoples Democratic Party (PDP) in the governorship election in Plateau State.

THE outcome of the Plateau State governorship election was a shock to political observers and other stakeholders who had been monitoring the trend of events in the build-up to the election. Based on the build-up to the poll, it was expected to be a keen contest between the candidate of the Peoples Democratic Party (PDP), Senator Jeremiah Useni, and the incumbent governor Simon Lalong of the All Progressive Congress (APC).

PDP, which lost the grip of the state to APC in 2015, was determined to send the latter out of power while the incumbent was also more resolute in its determination to sustain its grip on power to prove that it was in control of the state. Based on the level of preparation of the two leading political parties and their knowledge of the political terrain, no one could predict where the pendulum would eventually swing before the conduct of the election.

The build-up to the election was characterised by dirty political intrigues and manoeuverings, as all manner of sentiments were whipped up by the major players in the bid to gain comparative advantage over one another. Associations, religious and ethnic groups within the state were polarised along the Lalong and Useni divides. At a point, the Church became a centre stage for politicking, as some denominations were caught in the web of politics.

At the thanksgiving service to mark his reelection at Saint Monica Catholic Church in Jos, Governor Lalong attested to the fact that the state was divided along denominational, religious and ethnic lines adding that this generated disturbance during the election. He however implored the people to eschew bitterness, ethnicity and religious differences and channel their energy towards productive venture that will enthrone development in the state.

While the PDP claimed it was capitalising on the shortcomings (perceived or real) of Governor Lalong, especially the alleged non-commitment of his administration to the Plateau agenda, the APC, on the other hand, claimed that the PDP governorship candidate was too old to file out for the race and also that his emergence as the governor may rock the boat of the existing zoning arrangement among the three senatorial zones in the state.

As a result of the vigorous campaigns mounted by both sides, analysts and observers before the election found it difficult to predict the outcome. However, they were jolted when the results began to trickle in. In the Match 9 election, the APC candidate, Governor Lalong, polled 583,255 to defeat his closest rival, Senator Useni of PDP who scored 538,325.

The incumbent governor would have been declared winner at the first ballot, but the election was declared inconclusive because the number of votes cancelled was more than the margin between the duo of Lalong and Useni. A supplementary exercise was therefore declared. Many saw the rerun as mere formality because the APC was leading with 44,929 votes. However, the final result of the rerun gave Governor Lalong a wider margin as he scored 595,582 ahead of his main challenger, Useni, who eventually had a total of 546,843 votes.

The declaration of the election result by the INEC Returning Officer, Professor Richard Kimbir, vice chancellor of the University of Agriculture, Makurdi, Benue State, was however received with mixed feelings: While Governor Lalong, along with his supporters, went into jubilation and thanksgiving, the PDP candidate and his supporters retreated into a closed-door meeting to take stock of all that transpired and decide on the next line of action. In their resolution after the meeting, they alleged that both the main and supplementary elections were massively rigged.

Addressing newsmen shortly after the result was declared, Senator Useni rejected the results and directed his legal team to activate all the due processes to reclaim what he called his mandate. Useni, who expressed his appreciation to the people of Plateau State for their massive support for him and the party as their preferred alternative for good governance in the state, assured that the massive support would not go in vain.

“My team and I have gone through both the official results released by INEC and the documents submitted by our field staff. We have every reason to believe that justice has not been done to our people in this election, because there was massive rigging and electoral shortcomings,” he said.

He said that after due consultation, it was unanimously agreed that the result announced by INEC was not acceptable to the party, adding that the party has requested its legal team to activate all the due processes to reclaim its mandate.

“I give you my word that I will pursue this matter diligently and, by the grace of God, we will recover the people’s mandate. The restoration agenda is for the soul of Plateau State until its glory is restored,” he said.

Though Governor Lalong won the election with reasonable margin, analysts believe Useni put up a good fight with solid structure. They were however, quick to add that some factors considered as insignificant placed the governor at a vantage position to defeat the 75-year-old candidate of the PDP.

Governor Lalong’s campaign in the course of the election was hinged on up-to-date payment of civil servants’ salary, completion of abandoned projects inherited from his predecessors and sustenance of peace in the troubled parts of the state. These are no doubt laudable programmes that proved capable of aiding his victory, but the shortcomings of the PDP further gave the APC the opportunity to win the governorship election.

Political observers on the Plateau believe that the PDP went into the election with a divided house. The crisis that rocked the party over the choice of the running mate to its governorship candidate was one albatross that crippled the chance of PDP. The Central Senatorial District, especially Mangu Local Government Area, which produced the deputy, was sharply divided. There was an insinuation that Dr James Dalok, the PDP running mate, was not the choice of the people. The uproar that trailed his choice led to the defection of some prominent members of the party in the district to the APC, as all entreaties to address the situation before the election proved abortive.

Apart from this, the Southern Senatorial District, especially the Tarok nation which inhabits both Langtang North and Langtang South where Senator Useni hails from, was also divided and polarised. The general expectation was that the people of the two local government areas would give block votes to their son but the reverse was the case, a situation analysts attributed to internal wrangling.

A source close to the two local councils told Nigerian Tribune that the PDP made a tactical mistake to have allowed all its candidates for the 2019 elections from the southern district to come from Langtang North Local Government Area. The candidate for the House of Representatives, Beni Lar; senatorial candidate, Kefas Lar and the governorship candidate, Useni are all from this local government, while other local government areas like Langtang South, Mikang, Shendam, Qua’Pan and Wase felt annihilated and excluded in the scheme of things.

Checks revealed that while those loyal to Useni mounted vigorous campaign for block votes, especially in Langtang North, Langtang South and other Tarok-speaking areas in other local government areas in the zone, the aggrieved ones were also on the prowl doing the damaging, thus denying him reasonable votes which could have ensured block votes for him from the zone.

Though it was a keen contest devoid of violence between the candidates of APC and PDP across the state, the two political parties worked for outright win but the APC candidate won the election. In spite of this, the PDP has rejected the result alleging that there were widespread multiple thumbprinting, vote buying and outright intimidation by soldiers who it alleged had no business with the election. The party is billed to file a petition before the election petitions tribunal before the week runs out.

From all indications, Governor Lalong seems unperturbed. Deputy Director Media and Publicity of the campaign council of the APC, Festus Funater, who said the election was free and fair, has declared that the party is not moved by the threat of PDP candidate to approach the election petitions tribunal as he said the APC is adequately prepared to meet the PDP in court.

The confidence being exuded by the Lalong camp notwithstanding, the firework is expected to continue at the election petitions tribunal, as the defeated PDP candidate, Senator Jeremiah Useni, has declared that Governor Lalong’s victory is a temporary one which will not last beyond the sitting of the tribunal.