You are here
Home > Donald Trump > ICC president addresses UNGA, says Buhari is one of the most respected African statesmen

Chile Eboe-Osuji, president of the International Criminal Court (ICC) says President Muhammadu Buhari is one of the most highly respected African statesmen of our time.

Speaking to the United Nations General Assembly (UNGA) in New York earlier in the week, Eboe-Osuji expressed reverence for president Buhari, quoting him three times in his speech to the UN.

The speech, which was his first in his capacity as president of the ICC, was on the occasion of presenting the Court’s annual report to the United Nations for 2017/2018.

In a copy mailed to TheCable by the ICC, Osuji made a case for the sustenance of the criminal court, despite opposition from President Donald Trump of the United States.

The ICC president said this year “marks the 20th Anniversary of the adoption of the Statute of the International Criminal Court, fondly called the Rome Statute”.

He stated that the ICC was created to serve as a conscience to humanity in her journey to and through civilisation.

“[The]Mindful[ness] that during [the 20th ] century [in which the Rome Statute was adopted] millions of children, women and men ha[d] been victims of unimaginable atrocities that deeply shock the conscience of humanity,” Eboe-Osuji said.

He went on to quote President Buhari as he made a case for the sustenance of the criminal court.

“One of the most highly respected African Statesmen of our time answered that question in a very straightforward way,” he said.

“As part of his own reflections during the 20th Anniversary of the Rome Statute in July, Nigeria’s President Muhammadu Buhari answered that question in these words: ‘With the alarming proliferation of the most serious crimes around the world, the ICC, and all that it stands for, is now needed more than ever, in ways that were unforeseeable to its founders’. 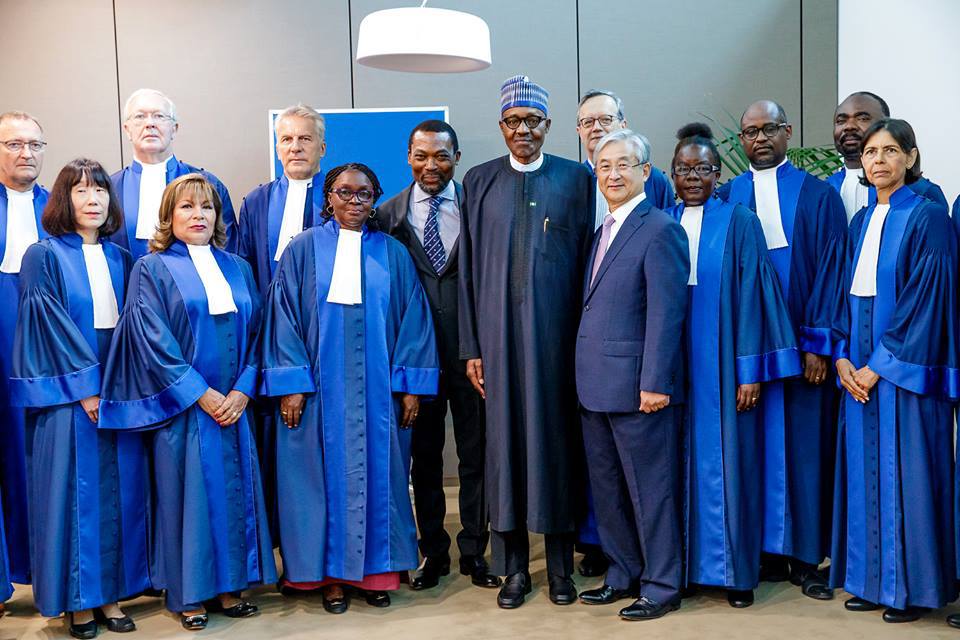 Buhari at The Hague with ICC judges

‘The ICC may have been created at a time of optimism that it would not need to be utilized frequently, but, unfortunately, the increase in international crimes has only increased the Court’s relevance.’”

The 56-year-old judge went on to say the ICC is one real structure that the world has now to try those who would commit international crimes, and prevent such in the future.

“In this regard, I cannot but invoke the following words of Nigeria’s President Buhari on the occasion of the 20th Anniversary of the Rome Statute: ‘The Rome Statute created more than a court; it created the outline for a system of justice for horrific crimes rooted first in national courts doing their job, and where they fail to do so, the ICC stepping in only as the “court of the last resort”.’”

He asked the UNGA to make the court stronger, rather than weaken its powers.

“I urge you to make it stronger in every way that you can. DO NOT allow it to be weakened. Here, again, I quote President Buhari one more time: ‘I urge all States that have not yet done so to, as a matter of deliberate State policy, accede to the Rome Statute of the International Criminal Court so that it can become a universal treaty.’”

Donald Trump attacked the court last week, stating that “the United States will provide no support in recognition to the International Criminal Court.”

“As far as America is concerned, the ICC has no jurisdiction, no legitimacy, and no authority,” he added.

The Rome Statute, which established the ICC, was adopted on the eve of Mandela’s birthday 20 years ago – on 17 July 1998.