You are here
Home > Africa > Illegal migration: A major challenge for Africa 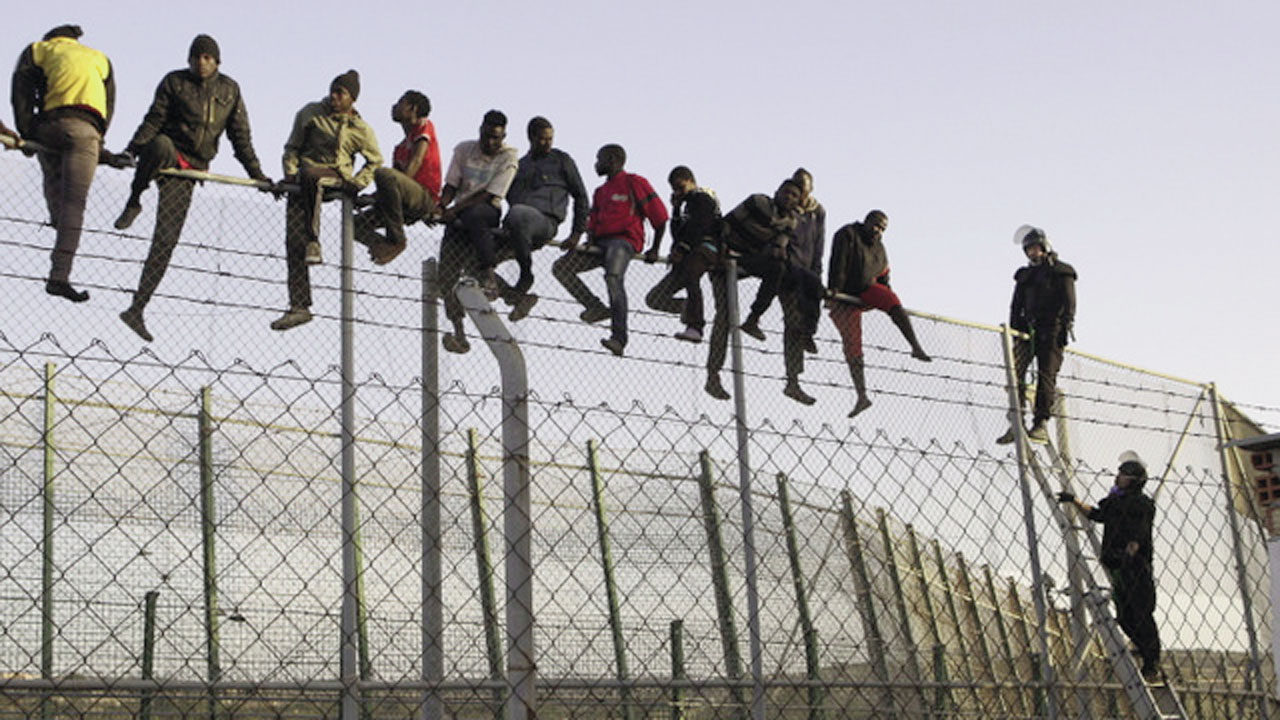 Every nation, country or colony often has rules and laws that control and regulate how people come into their territories. When people or someone move from one area or country to settle in another, it is called migration.

But migration becomes illegal if people do not have the permission of the country or borders they are entering into.

The flow of illegal migrants is often from poorer countries to richer countries. The people involved often are not the poorest in their home countries.  They tend to be people with a lot of information, knowledge, ambition and motivation, which often fuels their desire to migrate for better life.

Most times, people migrate to host countries as a result of war, political persecution and economic reasons.

Young African men and women risk everything, including their lives, to take on the perilous trip across dozens of borders and the treacherous waves of the Mediterranean Sea in search of a better life. Some die along the way, some are turned back and those who finish the journey realize that life may not be easier across the frontiers. But with few jobs and dim prospects at home, millions of youths and young adults in Africa still choose to migrate, often clandestinely.

People in a bid to leave their country of origin, migrate illegally to host countries and no nation smiles at it.

Illegal migrants are people who live in a place without permission and the authorities have no record of them. It also includes people who visit a country for tourism or education or health purposes legally, but do not go back. This means even though they went there legally, they are now illegal immigrants because they have out-stayed the time they were given. In a similar way, immigrants who have expired documents, or who came in with fake documents all fall under undocumented.

In Russia, during the just concluded FIFA world cup, people were able to get to Russia through the approved fan ID card, which allows football fans to enter a country without visas. The ID card expired on the 17th of July, but some Nigerians decided to stay back to search for greener pastures, making their stay illegal.

Some are just victim of circumstances who are tricked by travel agents. Fraudulent agents fail to keep promise of jobs and accommodation. Some procure fake visas or tourist visas which would last for few weeks.

For instance, a Nigerian, who tried to exploit the opportunity open to football fans, ran into problems before he left for the world cup. At the airport he had to pay N50, 000 to be cleared because a different name was on his ID card. The agent who booked his hotel for two days did not remit the money to the hotel so he had to pay more for booking the hotel without payment. He was promised a job and an apartment on getting into the country, but got nothing.

Due to the risks in travelling via sea, or through deserts, Africans look for opportunities like the world cup to travel.

Most times these travellers don’t have vast knowledge on where they are going. Getting there, they realise that things are not as they seem. Citing the world cup scenario as an example, many on getting to Russia, saw that the odds were against them, such as the language barriers. To communicate in Russia, an interpreter is needed. As a stranger, it will be difficult to communicate with indigenes, because they might not have the patience to use the phone for translations.

Another factor that makes such a huge number to seek to leave Africa is the narration about the availability of jobs abroad. What the adventurists don’t know is that there are documents required for job procurement, which they obviously don’t have. In most cases, jobs are not enough for the indigenes, not to talk of undocumented immigrants.

Africa is one of the continents with the highest number of migrants, legal and illegal. This is as a result of the level of poverty, ethnic conflicts, political issues and terrorism.

Illegal migration has been a problem in Africa, a major cause of brain drain. It has robbed Africa of talents, hence promoting shortage of manpower in different sectors. The youths who make up the larger percentage of the migrants leave the continent in order to explore and showcase their skills for ‘befitting’ reward. When talents leave, things become difficult in the sectors that need them and this cripples the economy.

Barack Obama, former U.S President, in his recent visit to Africa urged youths to drive change at home rather than emigrating, and tasked governments to do more to curb brain drain.

Earlier, French president, Emmanuel Macron while in Nigeria last month similarly urged Africans to stay back and build their nations. According to him, only Africans can build Africa.

Macron stated that migrants who are genuinely displaced in places of conflict would be accommodated but frowned at the ideology of mass migration to Europe by Africans on the assumption that everything is well over there.

He also used the opportunity to flay African leaders for not creating a better environment for the youths to thrive and foster development.

“Africa is changing. Two-third of the population of Africa is about 35 years old. This young people have the responsibility to build Africa. I want you to build a new Africa, where nobody will decide your future, but you have to take up the responsibility.

“The new narrative is that Africa is the one to develop Africa and push the new frontiers. I believe it is good for Africa and it is good for France. If Africa did not succeed, Europe will not succeed. When this happens, it will reduce the problem of illegal migration,” the French president stressed while in Lagos.

Often times, when people leave Africa, they don’t think of home, and such development hampers innovations in Africa. If all the talents that leave Africa were pulled together, there would be a lot of changes.

Migration is currently at the centre of disagreements between the mainly poor origin countries and the richer host nations. Today the world is more connected than ever. Information, commodities and money flow rapidly across national boundaries, a phenomenon often referred to as globalization. But while industrial countries are promoting easier flows of capital, goods and services (which they mainly supply), they are at the same time restricting the movement of labour, which comes mainly from developing countries.

Professor of international law and jurisprudence and former University vice chancellor, Akin Oyebode said the mass migration of younger Africans to Western countries is a huge deficit to the continent.

His words: “The haemorrhage of especially younger Africans to Western Europe and North America is, on the whole, a deficit for the African continent.”

Also, Dr. Tunde Oseni, Senior Lecturer and Head of Department of Politics & International Relations, Lead City University, Ibadan believes that irregular migration or what has come to be known as illegal migration has multiple causes and consequences on African states.

According to him, the major social drivers are poverty, illiteracy and ignorance. “The environmental causes include climate change, for instance the drying up of the lake Chad and the transhumance dimensions. We can talk about intra-Africa migration and international migration. Within Africa, more economically stable countries such as South Africa tend to have influx of Africans seeking the so-called greener pasture, leading to strained relations between some indigenes who feel threatened.

“This often leads to xenophobic attacks and reprisals. The most dangerous irregular migration is the risky one via Mediterranean sea after unpredictable journey through dangerous Sahara desert. Those who see Europe and the North America as Eldorado risk all. They sell off their property and at times get duped by dubious agents. Many have died in the process.”

He pointed out that Africa is losing human capital and financial capital to the cycle of irregular migration. To stop this, he suggested, governments and international organizations would have to fight poverty, illiteracy and ignorance through conscious practical policy and legal frameworks.

“And since most of these irregular migrants are young people, emphasis will have to be placed on youth empowerment if also to maximize the demographic dividends of over 300 million young people in Africa,” he suggested.
Associate professor of law in jurisprudence and international relations at the Lagos State University, Gbadebo Olagunju is of the view that migration issues are generally social problems, which has always been there from time immemorial.

Said he: “Various protocols provide for free movement of persons in Africa such as that of ECOWAS. What International law is concerned with is the protection of individuals and their rights whether they are legal or illegal migrants. But most countries forget that even an illegal migrant is first and foremost a human being who enjoys all full rights- such as right to life, dignity and protection from inhuman treatment under international law and international humanitarian law.”

He identified porousness borders as the greatest challenge African countries face in the area of illegal migration.  According to him, there is nothing those countries can do until they strengthen their bothers individually and collectively.

“In the EU where the single border/entry is practiced once you enter through any of the countries under Shengen, you’re thorough and properly profiled and your records/documentation passed to other members such that if you commit a crime in one country, it is easy to track you down in the others if you’re on the run.

“Under the Geneva Convention: Common Article II, International Humanitarian Law provides that migrants, refugees IDPs etc are entitled to humanitarian treatment and must not be subjected to any form of inhuman treatment because of their state. All their rights must be respected and they must not be subjected to any abuse because of the reason of their condition,” he declared.