By Johnbosco Agbakwuru
ABUJA—NATIONAL Chairman of  All Progressives Congress, APC, Comrade Adams Oshiomhole, yesterday, threatened to suspend the Minister of Labour and Employment, Senator Chris Ngige, from the party, if he failed to obey the orders of the party. 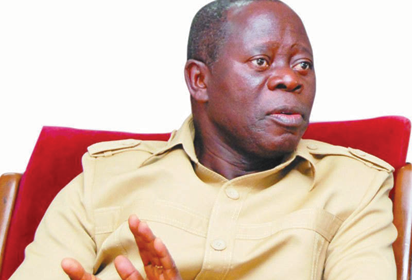 Oshiomhole also said, if the minister was expelled from the party, he would prevail on President Muhammadu Buhari to sack him from the cabinet.

Recently, Comrade Oshiomhole directed Ngige to inaugurate the governing councils of boards in his ministry but Ngige explained that three of the four boards had been inaugurated and that the delay in the inauguration of the Nigeria Social Insurance Trust Funds, NSITF, governing council was due to the ongoing probe of the former board.

Ngige also explained that the Administrative Panel set up by the ministry to look into the finances of the board recently submitted its report which claimed that over N40 billion was unaccounted for.

Apart from Mr Ngige, Minister of State (Aviation), Hadi Sirika, is also yet to inaugurate some boards under his ministry.

Asked to comment on Oshiomhole’s threat to expel Dr Ngige, the Presidency said any clarification on the issue should be directed to the party chairman.

The Senior Special Assistant to the President on Media and Publicity, Malam Garba Shehu, said: “What is my business there? It is not my issue. If they want to clarify from the chairman let them go and talk to him if they don’t understand what he is saying.”

Dr Ngige neither picked his calls nor replied to text messages sent to him. However, his Special Assistant on Media, Nwachukwu Obidiozo said  the Minister had no comment on the APC chairman’s threat.

He said: “The minister doesn’t have any comments. The minister has said what he has to say and there is no further comment. He has said everything in his letter, that is all.”

Speaking to State House correspondents after a meeting with President Muhammadu Buhari and the Chief of Staff to the President at the State House, Comrade Oshiomhole said his leadership as the APC chairman will not condone any act of indiscipline.

He said:   ‘’If the minister refuses (to inaugurate NSITF governing board), we will suspend him from the party. You know we must return to internal discipline.’

“For me, it is the height of mischief for any minister; you cannot purport to be honourable minister and act dishonourably. Nobody is greater than the party. And if the President condones disrespect for his office, I will not condone disrespect for the party.

“When we expel the minister, we will prevail on the President that he can’t keep in his cabinet people, who have neither respect for his own decisions nor for the party without which they would not have been ministers.

“There are no independent candidates in our system, nobody, I emphasise, no minister is above the party and they have taken undue advantage of the President’s fatherly disposition.

“Now, the same green pen that made them ministers appointed these boards they are refusing to swear in; and it is absolutely illegal for a minister in a democracy to prey on the powers of the board because the laws establishing those institutions are clear; that the boards have procedures to follow.

“So, when a minister sits in his office to appropriate the powers of the board in a democracy, not in a dictatorship, award contracts that didn’t go through boards, those are clearly abuse of office for which they are liable.

“I am convinced that what they are doing is not with the endorsement of Mr. President.  Over time, they have tried to drop the President’s name but I tell them it is the same authority that appointed these people.

“So, we are informing them that it is either they comply with the President’s instructions, the party’s position or they go and administer outside the government.

“We have respect for ministers but only to the extent that they recognize that they are a product of a political party and we are not negotiating that. If they did that in the past, under our leadership, we will not tolerate it.

“They either comply or we will expel them from the party. When we expel them, we will find out how a government can keep a rebel in the cabinet. There is no question about that.”

On allegations that he was losing sleep as a result of the regrouping of the Peoples Democratic Party, PDP, ahead of the 2019 elections, he said he had no cause to lose sleep.

He said:  “No, I am not losing sleep. I am sleeping very well. I still maintain that I don’t see any man of honour who, with his eyes open left PDP on the account of their gross mismanagement, abuse of the treasury and all of the crimes that the PDP committed.

“I don’t see them, whatever their irritations, that cannot be a justification to return to a house that all we need to do is to play back their own tape about what PDP represents and why they left.

“I still hold the view that you can’t vomit in the morning and convert it to lunch in the afternoon if you have honour. That position remains the same.

“Number two is that yes, I have made this point clear that we can distinguish the mercenaries from those who genuinely have complaints. Our business as party leaders is to try and manage, listen and find solutions to those who have verifiable complaints.

“But those who are permanent mercenaries and are in this business for personal issues, there is not much we can do about that and we are not going to change the core values of the party in order to retain them.

“However, on principle, I do not deal with political mercenaries, that remains my position. I will not miss my sleep because a lot of these guys cannot on a good day deliver their units. And we have the records that tell us who won elections where.

“I am a tested fighter, I fought them from Edo from zero and I overcame their most powerful godfathers. So, I know what I am talking about, I speak from experience and I will talk, negotiate and persuade but there are core principles that are not negotiable.”