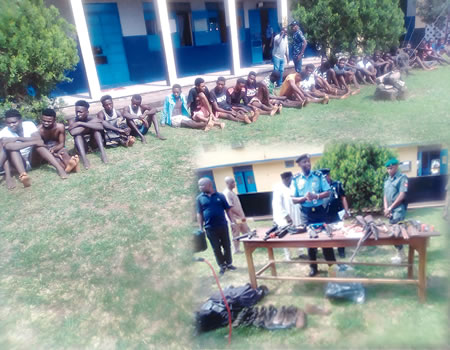 There is a growing unrest in parts of Edo State. From the fatal mass shooting of five celebrating students who had just graduated from the state-owned Ambrose Alli University, Ekpoma to the gruesome killing of policemen in Owan Local Government Area, to the series of killings in Benin, things, no doubt, are no longer at ease.

After gruelling years at Ekpoma, burning the midnight oil, the graduating students were just too happy to let off steam. They were in the middle of a celebration on September 18, 2018 afternoon when the skulking gunmen believed to be cultists barged in.

The hoodlums were said to have stormed the party at the Ihunmudumun neighbourhood of the university town, brandishing sophisticated assault guns, which they fired sporadically. When the shooting stopped, about five people had been shot dead by the rampaging gunmen who stormed the private hostel, the venue of the celebration, while several others, who were critically injured, were rushed to an undisclosed private hospital for treatment.

Another was the case of suspected teenager, Junior Omo Shaba, 19, who allegedly killed his 18-year-old girlfriend, Matilda Odiri, in Benin, on the night of July 15 last year. He was said to have marked time in a juvenile home for membership of a secret cult. He is presently being detained at Sapele Road Prison in Benin, where he is awaiting trial.

The travails of Junior broke his father as he had hope of rehabilitating his son after he was released from a remand home at Uromi, Esan South East local government area, where he was incarcerated for three years for alleged membership of a cult. His father died last year, about one month after Junior was apprehended.

Before then, on July 31, the police had in Benin paraded Mr. Wilson Iriajien, a graduate of AAU for being in possession of two pump action and unlicensed double barrel guns.

Iriajien, who claimed to be an international businessman, was arrested by detectives from the Assistant Inspector General of Police Zone 5 headquarters in Benin. Iriajien explained that the double barrel rifle was an inheritance from his deceased father who passed on in 2004 but admitted that the pump action guns were for self protection. The suspect confessed that during his time at the state-owned university in the 1990s, he was a member of the Eiye confraternity but had since renounced his membership of the dreaded cult group. Not even the mass arrest of a record number of 102 suspects who were mostly cult members last July and another batch of 115 in August, by the police in the state, could hold the alleged cult members back.

Only last November, Mr. Victor Odaro was brutally axed to death by suspected cult members at Evbuekhoi, Uhunmwode Local Government Area. Things have not been the same for his pregnant wife and three children.

On January 24, homicide detectives immediately swung into action in a bid to unravel the circumstances surrounding the mysterious death of a medical doctor in the employment of the University of Benin Teaching Hospital (UBTH), who was simply identified as Ogbeide.

Ogbeide of the Radiology Department was said to have just returned to Benin from a trip and was reported to have stood by the roadside in front of the hospital at Ugbowo, where he was said to have been whisked away in a car by unknown men.

Few days before the death of the doctor, an unidentified middle-aged man was reportedly shot dead at Isiohor, a few meters away from the University of Benin (UNIBEN) main gate.

Unconfirmed reports had it that the assailants, who bore the hallmarks of cult members, ambushed the victim who was returning home. He was allegedly shot from behind and the bullets hit him on the back of his skull.

Not even law enforcement agents are spared as a policeman, Mr. Monday Ehijie, a sergeant, fell to the superior fire power of suspected cult members in a renewed war on January 26 at Nomayo Junction at Upper Sakponba area.

Ehijie, a police orderly to the chairman of Ikpoba-Okha Local Government Area of Edo State, and two persons were killed in the crossfire during a violent clash between two feuding cult factions.

On the night of February 18, guns again boomed at Upper Sakponba and Mr. Okunkpolor  Osatohamwen Von, the husband of Mrs. Anita Okunkpolor, a  Benin-based journalist, was murdered at a popular hotel.

The assailants, who stormed the hotel, wounded some guests with broken bottles, before they opened fire on the 43-year-old Okunkpolor. Panicky guests who sat at the relaxation spot in the hotel where the deceased worked ran for dear lives when the volley of shots rang out, even as the victim writhed in pain in the pool of his blood.

In a reprisal, 19-year-old Godspower Edobor was killed at Omozeghian Street, off Okhoro road, in the early hours of February 20. The latest murders came on the heels of the death of three persons who were killed by feuding cult members the day before. Among the February 19 victims was a man in his 40s simply identified as Africa and one John Terry, who was said to have had his skull smashed with a stone by his assailants.

In a renewed spate of reprisals by suspected cult members, a taxi driver, Mr. Madueke Obiagu, was on March 5 gunned down by unknown assailants in Benin in the morning. Madueke was reportedy shot dead in a hail of bullets right in front of his house at Akugbe Street, off Santana road, Ikpoba Hill, in Benin.  In the last one month, there has been unease in Benin as over 10 persons have been gruesomely murdered in cult-related killings.

The police, however, seemed not to be resting on its oars as four suspected cult members, who were arrested at different locations at Iyora, Etsako West Local Government Area, were paraded at the state headquarters on February 3. The suspects: Lucky Anthony, Sunday Anthony, John Omosuafo and Omomoh, who were allegedly caught during the initiation of new members into Vikings and Jurist Confraternity, were among the 54 cult members arrested by the police at different locations.

A University of Benin (UNIBEN) Sociologist, Professor Kingsley Omoyibo, attempted to unravel the puzzle surrounding the scourge, conceding that cult activities are not a new phenomenon as it exists in the church, mosque and even in the African Traditional Religion (ATR).

Omoyibo said that cultism in places of worship and ivory towers are supposed to be a confraternity, a brotherhood with the protection of its interest being a common denominator.

“Confraternities are all over the place but they become evil when they are secret. Pirate Confraternity as founded by Wole Soyinka was not a secret cult. It was a confraternity, a brotherhood that fought the establishment against the oppression of students. Killings started when they deviated from the real thing,” he said.

Omoyibo identified fight for women, money, businesses and other pecuniary interests as major causes of the bloody feud.

“It is true that Nigerians can gladly swear with either the Holy Bible or Quran but will own up if told to swear at an African traditional religious shrine,” he added.

We have put measures in place to curb killings—Police

But the police spokesman, Mr. Chidi Nwabuzor made it known that the force was not folding its hands doing nothing. Nwabuzor disclosed that several persons have been apprehended in connection with the series of killings but, however, did not disclose the number and identity of the suspects.

“Killings from clashes by rival cult groups have continued unabated in Edo State. The renewed clashes between the cult groups have claimed several lives, the police are aware of it and adequate measures have been put in place,” he said

Determined to stem the serial killings by suspected cultists, he remarked that from time to time, the police embark on joint security raids of criminal hideouts.  Nwabuzor expressed the determination of law enforcement agents to deal ruthlessly with any individual or group of people bent on disturbing the peace and tranquility being enjoyed.

The repeated cult-related killings are fast turning the ‘heartbeat of the nation’ into a gangsters’ paradise. Something urgent must be done to stop the descent into such a state.