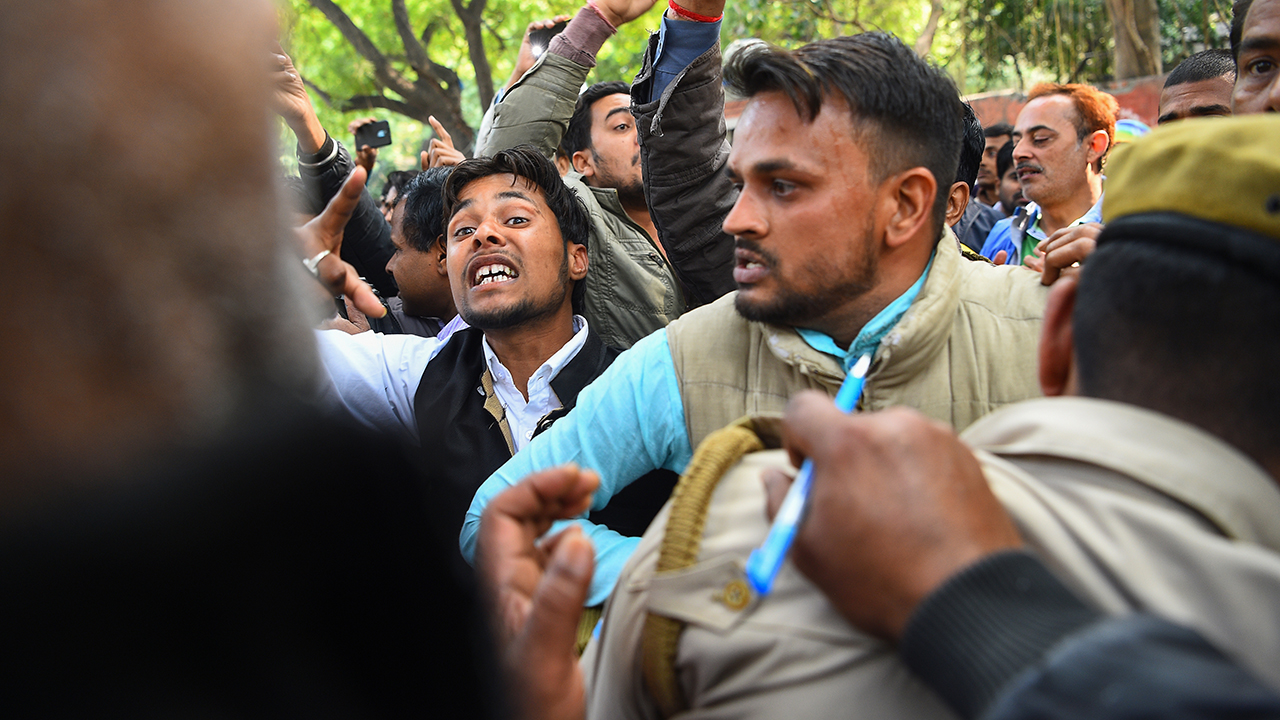 Indian protesters try to push their way through policemen guarding an injured man who had been attacked after a mob believed he was a Kashmiri who had shouted pro-Pakistan slogans, in New Delhi on February 17, 2019. – Protesters in the Indian capital on February 17 beat up a man they accused of being a Kashmiri and shouting pro-Pakistan slogans, amidst a demonstration in reaction to the February 14 suicide bombing attack on paramilitary troops in Kashmir that left 41 soldiers dead. (Photo by Sajjad HUSSAIN / AFP)

Indian authorities withdrew police protection for five separatist leaders in Kashmir on Sunday amid mounting fallout from a suicide bombing that killed 41 soldiers in the disputed region.

New Delhi has vowed to retaliate after a van packed with explosives ripped through a convoy transporting 2,500 soldiers across the Indian-administered territory on Thursday, the deadliest-ever attack in a 30-year-old armed conflict.

“We have decided to withdraw the security of separatist leaders in the wake of the attack on security forces,” home affairs ministry spokesman A. Bharat Bhushan Babu told AFP.

Babu said the decision followed a call by the government for a review of security for those “taking money from Pakistan.”

Until Sunday, Indian police had provided security details for the five men out of fears that an attack on Kashmiri political leaders could lead to an outbreak of violence in the Himalayan territory.

Mirwaiz — who has received police protection since the 1990 assassination of his religious leader father — heads the Hurriyat Conference, a coalition of local political parties that seeks independence for Kashmir or its merger with neighbouring Pakistan.

A Hurriyat spokesman dismissed the significance of the government’s decision.

“It has no bearing, neither can it change the reality of the lingering Kashmir dispute or the situation on the ground,” he said.

Kashmir has been split between India and Pakistan since both countries gained independence from Britain in 1947. Both claim the whole region and have fought three wars over the territory.

India accuses Pakistan of training and arming militants in Kashmir, while Islamabad says it only provides diplomatic and moral support for Kashmiris’ right to self-determination.

Prime Minister Narendra Modi’s government, which faces a national election in the coming months, has adopted an aggressive posture in Kashmir and shelved dialogue with Pakistan after accusing the previous government of being soft on militants.

It withdrew trade privileges for Pakistan and imposed a 200 percent customs duty on all imports from its neighbour within hours of Thursday’s attack, which was claimed by the Pakistan-based Jaish-e-Mohammed (JeM) militant group.

Pakistan has denied any involvement in the attack and dismissed Delhi’s accusations, calling them “well-rehearsed tactics from (the) Indian playbook after such incidents in the past”.

More street protests were held across India on Sunday.

Protesters in New Delhi burned effigies of Pakistani and JeM leaders while attacks on Kashmiris were reported in different cities.

A man believed to be Kashmiri was beaten by a crowd in New Delhi that accused him of chanting anti-India slogans, witnesses said. He was rescued by police.

Media reports said about a dozen people, including Kashmiris, had been arrested for making “derogatory” statements about the attack on social media.

A round-the-clock curfew remained in place in Jammu city, the Hindu-majority region of Kashmir, after mobs vandalised and torched properties belonging to Kashmiris. Internet services were cut across the state.

A shutdown was observed in Muslim-majority districts of Kashmir, including the main city Srinagar, following Thursday’s attacks.

Kashmir is the world’s most militarised zone with some 500,000 Indian troops deployed to fight a rebellion that broke out in 1989. Scores of armed groups are now involved.

Tens of thousands of people, mainly civilians, have died in the conflict. Last year was the deadliest in a decade with almost 600 killed.