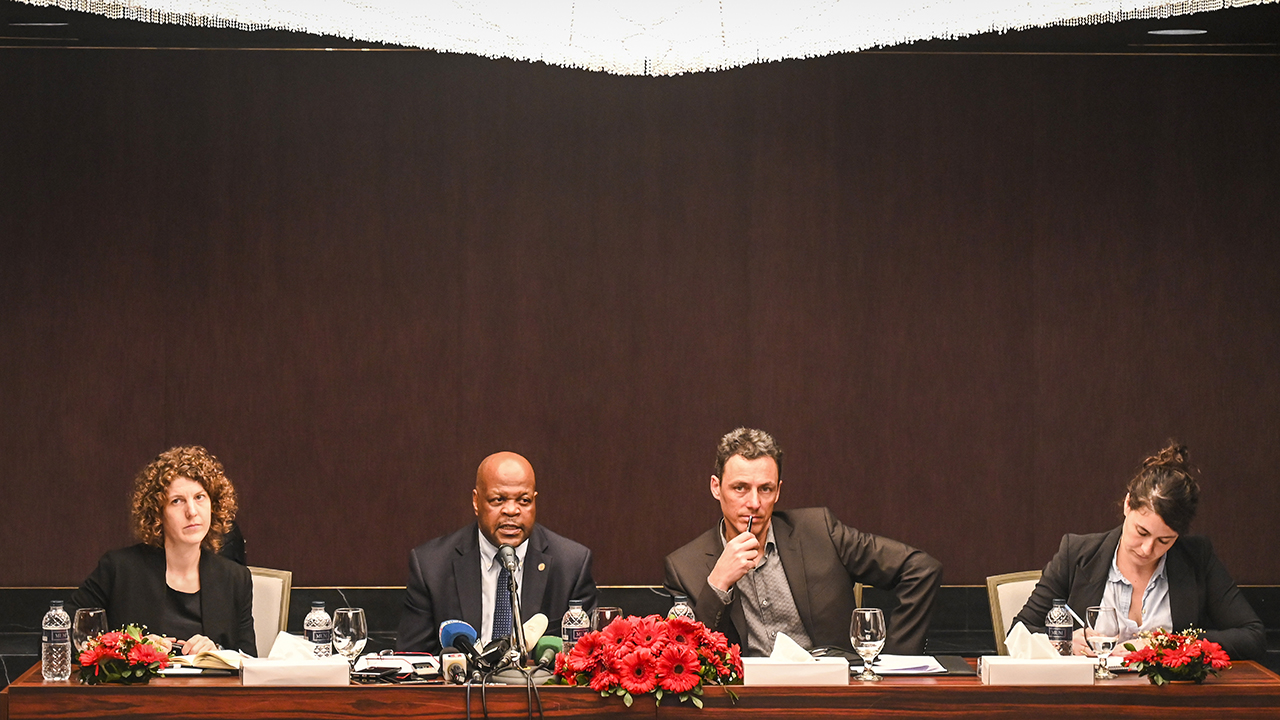 Director of Jurisdiction, Complementarity and Cooperation Division of the International Criminal Court (ICC), Phakiso Mochochoko (2nd L), speaks during a press conference in Dhaka on March 11, 2019. – The visiting delegates of the International Criminal Court speak on their primary investigation into the atrocities carried out against the Rohingya during Myanmar’s military crackdown against the Muslim group in August 2017. (Photo by MUNIR UZ ZAMAN / AFP)

The people responsible for the atrocities that forced hundreds of thousands of Rohingya Muslims to flee from Myanmar’s Rakhine state will be held to account, an International Criminal Court official said on Monday.

Following a visit to Bangladesh refugee camps, the ICC’s Phakiso Mochochoko said the fact that Myanmar is not a signatory to the Hague-based international court “will not in any way be a hindrance” to an investigation.

“It may present a little bit of challenge for us in terms of investigation, but we have faced a situation like this in the past and we’ve been able to deal with them,” the court’s director of jurisdiction told reporters in the capital Dhaka.

Mochochoko made the comments after leading a delegation to Bangladesh’s southeastern Cox’s Bazar district, home to around one million Rohingya refugees.

The delegation, however, clarified that its visit to the camps was not a part of any investigation but to collect insights for an ongoing assessment of the office of prosecutor Fatou Bensouda whether to warrant a full investigation.

“A preliminary examination is not an investigation, but an assessment of the Rome Statute criteria to decide whether an investigation into the situation at hand is warranted,” he said.

“Therefore during this mission, as is standard practice of the Office, the delegation did not collect evidence or perform any other investigative activities,” Mochochoko said.

Mochochoko said the preliminary probe would be “all about individual responsibility”.

“The prosecutor is bound or intended to ensure that accountability for the suffering of the Rohingya people is met and those who are responsible for the atrocity that happened there are brought to account,” he added.

The visit came after judges last year ruled that even though Myanmar has not signed up to the Hague-based ICC, the court still has jurisdiction over crimes against the Rohingya because Bangladesh is a member.

Last month Organisation of Islamic Cooperation — of which Bangladesh is a member — in a meeting in Abu Dhabi unanimously adopted a resolution to move at the International Court of Justice (ICJ) for establishing the legal rights of the Rohingya and addressing the question of accountability and justice, Dhaka’s foreign ministry said.

Myanmar’s army has denied nearly all wrongdoing, insisting its campaign was justified to root out Rohingya insurgents who staged deadly raids on border posts in August 2017.