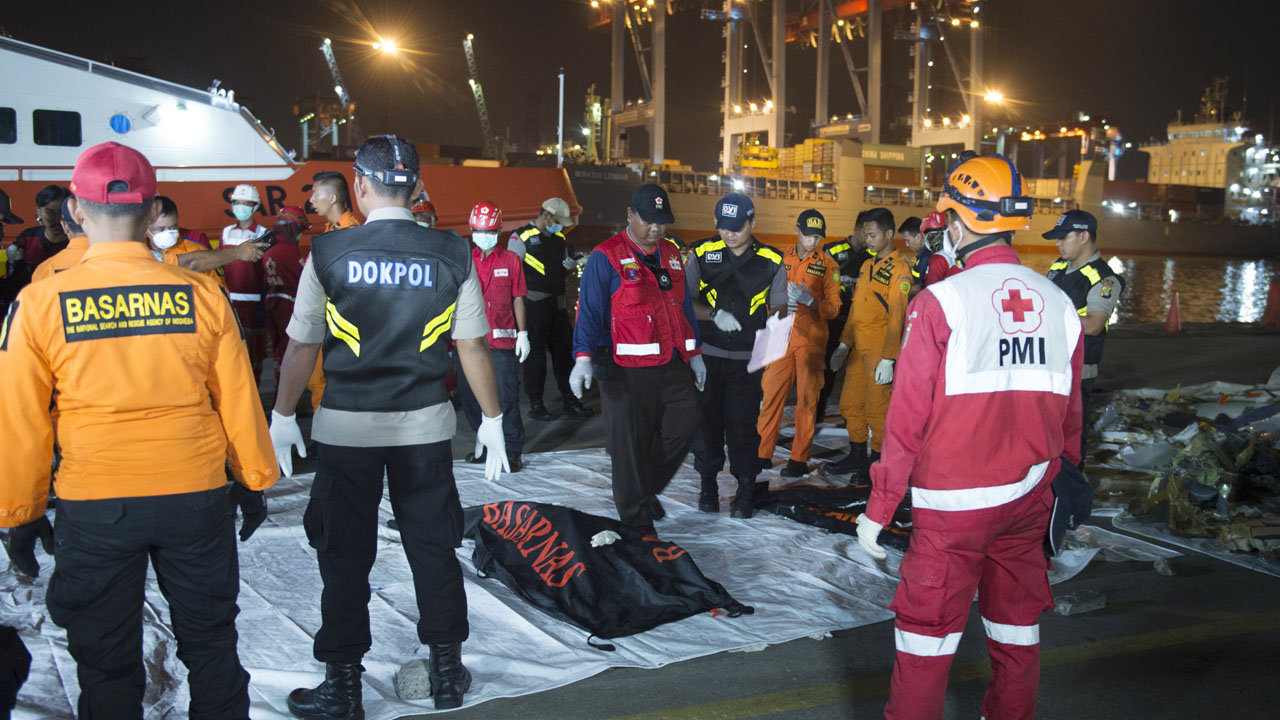 Rescue personnel stand around bags containing the remains of victims of the ill-fated Lion Air flight JT 610 as they arrive at a port in Jakarta on October 31, 2018. – The smashed fuselage of a crashed Indonesian Lion Air jetliner may have been found, a top military commander said on October 31, as Jakarta ordered the removal of the budget carrier’s technical director and staff who cleared the doomed flight for take-off. (Photo by BAY ISMOYO / AFP)

Indonesian investigators said they were homing in on the black box from a crashed jetliner after locating its “pings” on Wednesday, two days after the jet crashed shortly after take-off with 189 people on board.

Retrieving the black box will be key to unlocking why the Boeing 737-MAX, one of the world’s newest and most advanced commercial passenger jets, nosedived into the Java sea so soon after leaving Jakarta.

Authorities said they believed they were closing in on the main wreckage and had picked up the box’s signals some 30-40 meters (100-130 feet) below the surface of the water off Indonesia’s north coast, where the plane crashed Monday.

“We could see a lot of passengers’ belongings — lifejackets, pants, clothes — underwater not just on the surface,” he added, saying the debris suggested the main fuselage should be nearby.

The black box contains flight data that shows the speed, altitude and direction of the plane, while the cockpit voice recorder keeps track of conversations and other sounds in the cockpit.

Dozens of divers were taking part in the 1,000-strong personnel recovery effort along with helicopters and ships, but authorities have all but ruled out finding any survivors.

The development comes as Boeing officials were due to meet with Lion Air on Wednesday after Indonesia ordered an inspection of the US plane maker’s 737-MAX jets.

He later stressed that the measure meant to free up the technical director to help with the crash probe.

‘Worst in the world’
Aviation experts say it is too early to determine what caused the accident.

But Lion’s admission that the plane had an unspecified technical issue on a previous flight — as well as the plane’s abrupt nosedive just 12 minutes after takeoff — have raised questions about whether it had any faults specific to the newly released model, including a speed-and-altitude system malfunction.

“The bigger picture here is that you’ve got a lot of American carriers flying the same aircraft,” Stephen Wright, an aviation expert at the University of Leeds, told AFP.

“Is there (a problem) that could affect other aircraft?”

The crash has also resurrected concerns about Indonesia’s patchy air safety record which led to a now-lifted ban on its planes entering US and European airspace.

Lion’s co-founder Rusdi Kirana, now Indonesia’s ambassador to Malaysia, said in a 2015 interview that “my airline is the worst in the world, but you don’t have a choice”.

Founded in 1999, the budget carrier capitalised on a boom in Indonesia’s aviation industry, but has been plagued by safety woes and complaints over unreliable scheduling and poor service.

Lion was involved in a number of incidents including a fatal 2004 crash and a collision between two Lion Air planes at Jakarta’s Soekarno-Hatta airport.

Boeing suspended release of the fuel-efficient 737 MAX just days before its first commercial delivery last year due to an engine issue.

But the single-aisle jet was subsequently cleared for commercial delivery and has had thousands of orders from more than 100 customers worldwide.

‘Dad, I love you every day’
Distraught relatives sifted through clothes, wallets and other retrieved personal effects on a Jakarta dockside, as authorities sent body parts to the hospital for DNA testing

“He was the best husband in the world,” 33-year-old Ningsi Ayorbaba said of her partner Ferdinand Paul Ayorbaba, who was on the flight.

“We had planned to celebrate our 15th anniversary in April…Today, I’m bringing in DNA samples.”

Late Wednesday, forensic analysts said they had made their first confirmed identification — a 24-year-old female chemical engineering graduate who described herself in an online blog as “energetic and highly motivated”.

Among the items plucked from the water was a smartphone case with the image of a couple walking hand-in-hand over a bridge.

The story went viral online and the pair were later identified as Ine Yunita Savitri and her husband Wahjoe Noegrohantoro, who was on the downed jet. Savitri was not on the plane.

On Tuesday, their daughter Samantha posted the image to her Instagram account with the words: “Dad, I love you every day”.