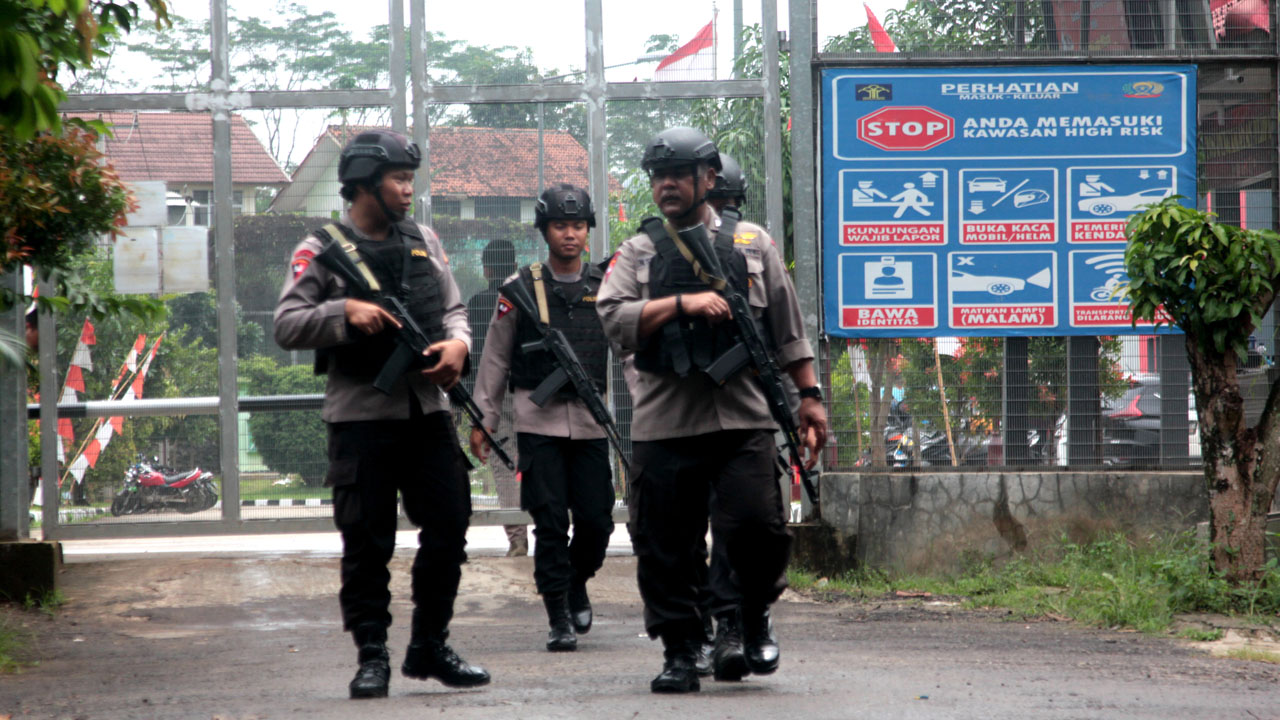 Indonesian security personnel patrol the perimeter of Gunung Sindur prison in Bogor on January 22, 2019, where radical cleric Abu Bakar Bashir, believed to have been a key figure in terror network Jemaah Islamiyah (JI) which was blamed for the 2002 Bali bombings, is jailed. – Plans to free the radical cleric linked to the deadly Bali bombings are under review, Indonesia has said on January 21, after the surprise decision drew sharp criticism. (Photo by Tjahyadi ERMAWAN / AFP)

Plans to free a radical cleric linked to the deadly Bali bombings are under review, Indonesia has said, after the surprise decision drew sharp criticism.

Abu Bakar Bashir, once synonymous with militant Islam in Indonesia, was tied to a terror network behind the 2002 attacks that killed more than 200 people, mostly foreign tourists.

Last week, Indonesian president Joko Widodo said he had given the green light for the early release of Bashir — believed to have been a key figure in militant group Jemaah Islamiyah (JI).

Widodo said the 80-year-old preacher was “old and sick”.

The plan was slammed both at home and abroad, with objections across Indonesian social media and from Australian leader Scott Morrison, who warned that Bashir was still a threat.

Dozens of Australians were killed in the Bali attacks.

In an apparent backtrack on Monday, Indonesia’s Chief Security Minister Wiranto said the president had ordered a “thorough and comprehensive study” of Bashir’s release from prison.

“We can’t act hastily or spontaneously,” the minister told reporters.

He did not say when a final decision would be made.

Bashir was sentenced to 15 years in jail in 2011 for helping fund a paramilitary group training in the conservative Islamic province of Aceh.

The firebrand preacher was previously jailed over the Bali bombings but that conviction was quashed on appeal. He has repeatedly denied involvement in terror attacks.

“We have no problem with (the review) but people might wonder why would they announce it in the first place,” Michdan told AFP.

Widodo had cited “humanitarian reasons” for agreeing to the release of the elderly preacher, sparking a torrent of criticism on Indonesian social media.

“This whole story is stupid beyond belief,” one Twitter user wrote.

Bashir “murdered hundreds of people. They don’t get to be with their families, but he does?”

While Indonesia has long been praised for its moderate practice of religion, the political influence of Islamist hardliners has grown in recent years with some viewing Bashir as a hero.

“Why did Jokowi choose to act now, when it was inevitable that he would be accused of trying to score political points?” said Sidney Jones at the Jakarta-based Institute for Policy Analysis of Conflict.

“It makes the president seem either Machiavellian enough to do anything in exchange for a few votes, or so politically deaf and blind that he had no idea of the consequences.”

The 2002 bombings prompted Jakarta to beef up counter-terror co-operation with the US and Australia.

“We have been very clear about the need to ensure that, as part of our joint counter-terrorism efforts … that Abu Bakar Bashir would not be in any position… to influence or incite anything,” Australia’s Morrison was quoted as saying.

Al-Qaeda-linked JI was founded by a handful of exiled Indonesian militants in Malaysia in the 1980s, and grew to include cells across Southeast Asia.

As well as the 2002 Bali bombings, the radical group was blamed for a 2003 car bomb at the JW Marriott hotel in Jakarta and a suicide car bomb the following year outside the Australian embassy.

An anti-terror crackdown weakened some of Indonesia’s most dangerous networks, including Jemaah Islamiyah.

Several militants convicted over their involvement in the Bali bombings have been executed while two others, including Malaysian Noordin Mohammed Top, were killed in police raids in 2009 and 2010.