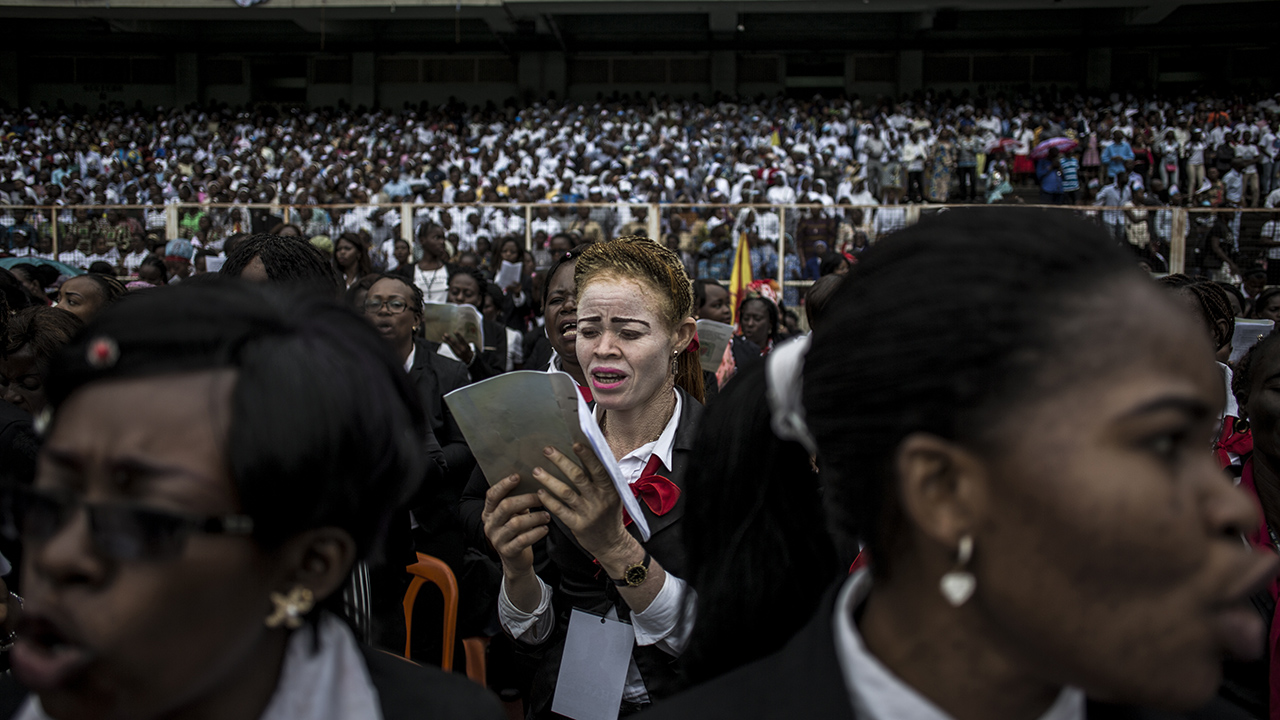 A Catholic choir sings during the inauguration of the new Archbishop of Kinshasa, Fridolin Ambongo in Kinshasa on November 25, 2018. (Photo by John WESSELS / AFP)

The influential Catholic Church joined the electoral fray Sunday as the Democratic Republic of Congo gears up for next month’s watershed presidential election to chose a successor to veteran leader Joseph Kabila.

Addressing several thousand attending mass, new archbishop of Kinshasa, Fridolin Ambongo, made a “vibrant appeal to the patriotic conscience of our people … not to succumb to provocation and, above all verbal, violence during this presidential campaign.”

Instead, he called for national unity ahead of a crucial poll in a volatile, poverty-stricken nation which outgoing President Kabila has ruled with an iron fist since 2001

Ambongo, who three weeks ago succeeded charismatic Laurent Monsengwo, used his open-air mass to urge voters they should have no truck with discrimination in any form, be it ethnic or political.

Two of the three main candidates to replace Kabila were in the congregation — Kabila’s hand-picked successor Emmanuel Ramazani Shadary and Martin Fayulu.

Little-known Fayulu had been set to be a unity opposition candidate until a fortnight ago when Felix Tshisekedi, son of DRC’s most well-known oppositionist Etienne Tshisekedi who died last year, announced he would stand on a ticket with former National Assembly president Vital Kamerhe.

That decision leaves the opposition weakened.

– ‘Campaign in God’s hands’ –
Catholics have long been pressing for the departure of Kabila, who has clung on to office despite his mandate officially expiring in December 2016. Three Catholic Church-organised rallies earlier this year saw a total of 15 deaths.

The election has already been postponed twice but next month a 40-million-strong electorate will have to choose between 21 candidates, who generally lose no opportunity to stress their pro-church credentials.

Shadary notably described himself as a practising Catholic when he announced he was standing on August 8.

“Comrade Ramazani Shadary is first and foremost a fervent Christian. He has placed his campaign in God’s hands,” said Jean-Claude Kazembe Musonda, an official with the pro-Kabila Common Front for Congo (FCC).

But God does not have to take the ruling side, says Kamerhe, who indicated that “before God and the Congolese people I have decided to give my support to Felix Tshisekedi.

Tshisekedi has promised a return to the rule of law, to fight corruption and to bring peace to the east of a country whose east has been ravaged by decades of inter-ethnic bloodshed and militia violence, and has recently been hit by a deadly Ebola outbreak.

– Bishops not backing a candidate –
At stake in the vote is the political future of a mineral-rich country that has never known a peaceful transition of power since independence from Belgium in 1960.

Though Tshisekedi and Fayulu may be representing rival opposition strands of opinion they pray at the same protestant church in Kinshasa.

Friday saw Congolese bishops urge “credible elections for a real democratic alternative” while stressing they were not backing any particular candidate, only seeking a leader who would “respect fundamental laws and be a man of his word, honest and of good morality who does not expropriate the country’s resources.”

The bishops said the country has long been suffering from abuse of powers “to the detriment of the collective well-being.”

Around 40 percent of people in DR Congo are Catholic, a similar proportion are Protestant and around 10 percent are Muslim while others are “Kimbanguists,” following a prophet in the southwestern city of Nkamba.

The church’s influence came to the fore when in late 2016 the episcopal conference brokered a peace accord which provisionally kept Kabila in power pending an election which is now finally just weeks away.

Kabila had a trenchant view on the church’s influence when he opined in January that “nowhere in the Bible did Jesus Christ oversee an electoral commission. Render unto God what is due to God and to Caesar what is due to Caesar,” the strongman said as he prepared his final year in office.

Kabila himself is married to a Catholic, Olive, and their marriage was celebrated at a joint Catholic and Protestant mass.

Archbishop Ambongo noted Sunday that “Christ the King delivers us a prophetic message — power is a service, humble services to fothers for their accomplishment.