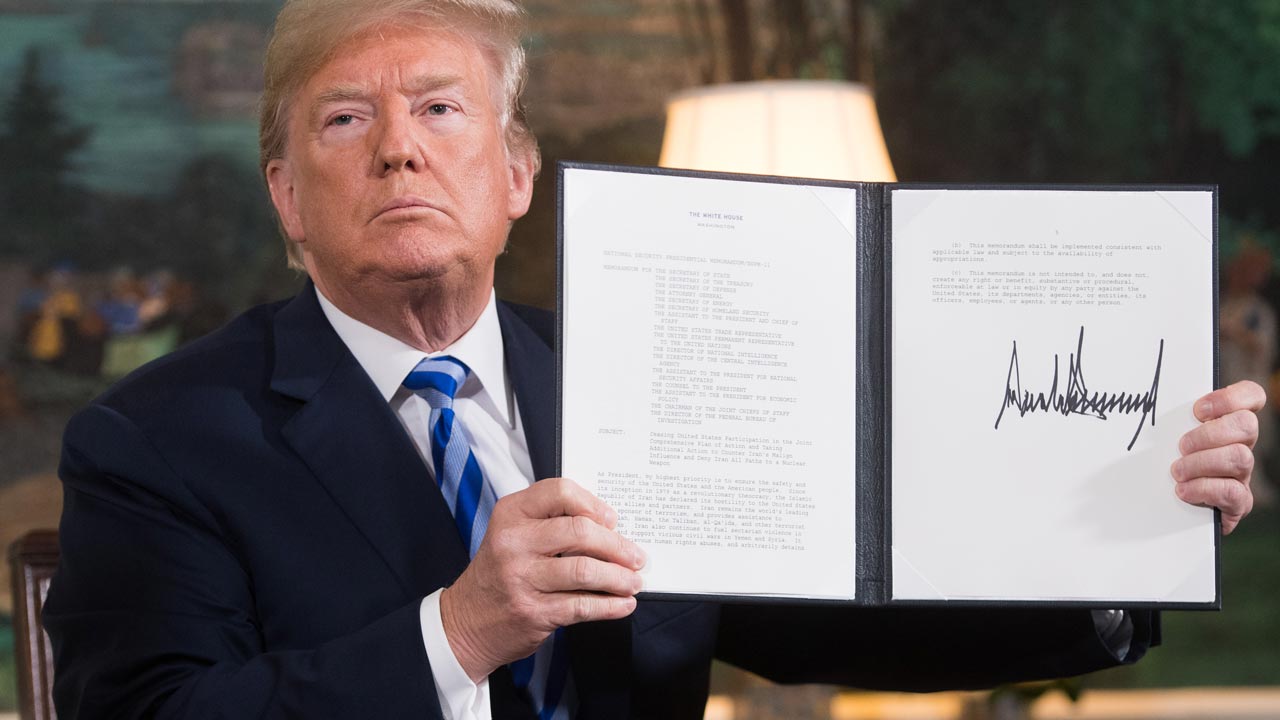 US President Donald Trump signs a document reinstating sanctions against Iran after announcing the US withdrawal from the Iran Nuclear deal, in the Diplomatic Reception Room at the White House in Washington, DC, on May 8, 2018. SAUL LOEB / AFP

The UN’s top court said Thursday it will hold hearings next month in a bitter battle between Iran and the United States, after President Donald Trump reimposed sanctions on the Islamic republic.

“The International Court of Justice (ICJ), the principal judicial organ of the United Nations, will hold public hearings from Monday 27 to Thursday 30 August in the case” concerning Iran versus the United States, the tribunal said.

“The hearings will be devoted to the request for the indication of provisional measures submitted by Iran,” it added in a statement.

Tehran filed its case with the ICJ last week calling for the judges to order the immediate lifting of the sanctions which they said would cause “irreparable prejudice.”

Nuclear-related sanctions are set to be reimposed by Washington in two phases in August and November, and seek to bar European and other foreign companies from doing business with Iran and blocking its oil sales abroad.

Iran argued in its filing to the court that the move would break a 1955 Treaty of Amity and Economic Relations concluded between the two countries before the Islamic revolution under the regime of the shah. But the two foes have not had official diplomatic relations since 1980.

The court, set up in 1946 in The Hague to rule in disputes between nations, revealed Wednesday that its president, judge Abdulqawi Ahmed Yusuf, had taken the unusual step to write a letter about the case directly to US Secretary of State Mike Pompeo.

It did not reveal the contents, but said under its rules the court could appeal to any party “to act in such a way as will enable any order the court may make … to have its appropriate effects.”

Over the objections of allies, Trump in May withdrew the United States from the nuclear deal signed between Tehran and world powers in 2015.

He ordered the reimposition of the US sanctions that had been suspended in return for controls on Tehran’s nuclear programme, effectively barring many multinational firms from doing business in Iran.

Four days of hearings into an earlier complaint lodged by Iran in October 2016 against the US for freezing around $2 billion of its assets abroad are due to start on October 8 when the United States will argue the court has no authority to hear the case.