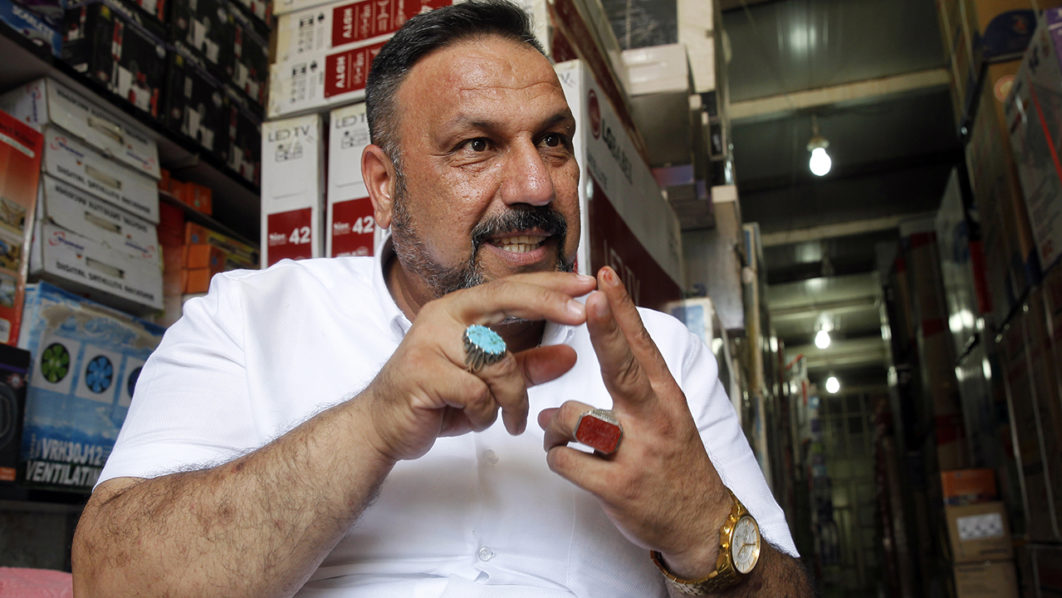 Ali Ajlane speaks to a reporter at his store in the Iraqi capital, Baghdad on August 8, 2018.<br />Caught in the crossfire between its allies Tehran and Washington, Iraq could suffer the heaviest collateral damage from the renewed US economic sanctions which took effect against Iran on Wednesday. / AFP PHOTO / SABAH ARAR

Caught in the crossfire between its key allies Tehran and Washington, Iraq’s economy could suffer the heaviest collateral damage from the US reimposing sanctions against Iran.

Washington slapped unilateral sanctions back on Tehran on Tuesday, after pulling out of a landmark 2015 nuclear deal in May.

For Iraq, recently emerged from an expensive war on jihadists, the embargo on its neighbour could hit jobs and cut off a crucial source of cheap imports.

In 2017, Iraq imported around $6.6 billion (5.7 billion euros) worth of products from Iran, ranging from cars and washing machines to agricultural goods.

Iraq has already witnessed a month of protests over a stagnant economy, widespread corruption, unemployment, chronic power cuts and an agriculture sector devastated by drought.

“Eighty percent of products on the market are Iranian-made, so if the border closes, it will be a crisis for us,” said Ali Ajlan, whose Baghdad store sells household electrical items.

Another importer, Abbas Mukhaylef, said he can’t even imagine an alternative to Iran as a supplier.

For the Iraqi consumer, Iranian goods have a big advantage: they are the cheapest on the market.

“We don’t support the sanctions because they are a strategic error, but we will comply with them,” Abadi said. “In general, sanctions are unjust.”

– Car imports stopped –
Baghdad is allied with Washington, a strategic partner in the war that saw Iraq declare “victory” over Islamic State group jihadists in December 2017.

But Baghdad also has strong ties to Tehran, a Shiite powerhouse that is heavily involved in the politics of Shiite-majority Iraq.

Imports paid in US dollars have already ground to a halt.

“To comply with the American sanctions, we’ve stopped imports of Iranian cars,” said a senior official in the auto import industry.

The official, who asked not to be named, said Baghdad had asked for an exemption from Washington to allow imports of Iranian spare parts for car assembly facilities in Iraq.

Production has ground to a halt with 5,000 jobs on the line, he said.

While Iraq’s exporters won’t feel too much of a pinch — Iran only imported $77 million worth of Iraqi goods last year — economic tourism looks set to take a hit.

“The two or three million Iranian pilgrims who come each year (to Shiite holy sites) represent a major economic activity that Iraq could now be deprived of,” warned Muzhar Mohammed Salah, an economic advisor to Iraq’s prime minister.

– Winners and losers –
The big winner will be the black market, which will feed demand for Iranian goods, predicted trader Ajlan, pointing out the border between the two countries runs more than 1,000 kilometres (600 miles).

“Imports will continue, even if, officially, they are prohibited,” he said.

He also forecast that tougher US sanctions on Tehran would spark “an influx of Iranian workers”, especially to the autonomous Kurdistan region, in a fresh blow to Iraq’s own workforce.

At least 14 people have been killed since protests erupted in early July in the southern province of Basra before spreading north, including to Baghdad.