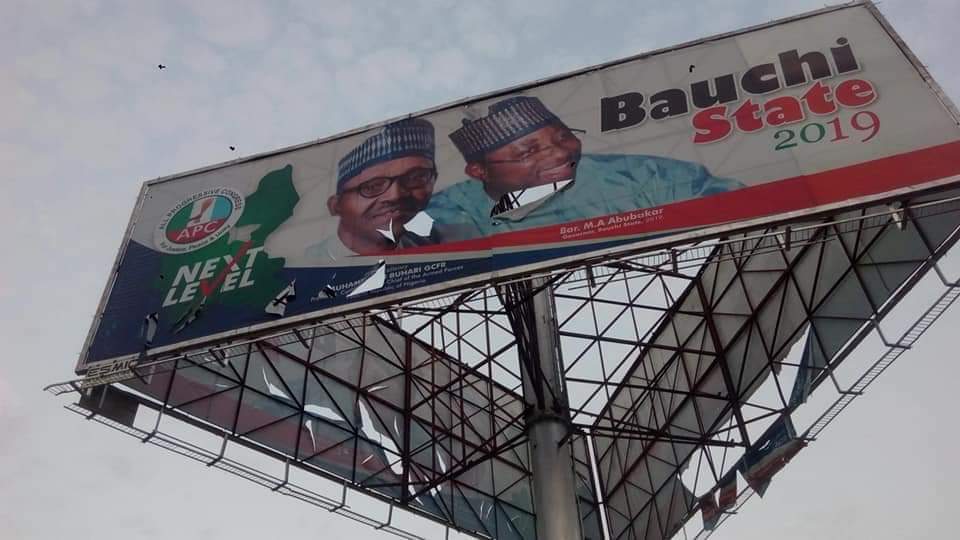 Irate youths, in the early hours of Tuesday, pulled down and destroyed posters and campaign billboards of Governor Mohammad Abdullahi Abubakar erected at various locations in Bauchi metropolis.

This is coming on the heels of the declaration by the Independent National Electoral Commission (INEC) that Senator Bala Mohammed of the Peoples Democratic Party (PDP) is the winner of the gubernatorial election in the state.

Security operatives had a hard time preventing the already agitated and aggressive youths who climbed streetlight poles and other structures to pull down the billboards and posters chanting songs of victory for the Governor-elect.

Big pillars carrying the posters and billboards were destroyed with saws by the hoodlums just as mobile containers used as mini offices during the electioneering campaign of Governor Mohammed Abubakar were removed and the iron sheets carted away by the youth.

Our Correspondent who went round the Bauchi metropolis discovered that the billboards and posters were destroyed in all roundabouts particularly in Yelwa, Dononyaro, Eagle, Gidan Mai, Awala, Wunti and Central Market.

The situation was the same in strategic locations within the metropolis, while those in Government House were spared because of the heavy presence of security operatives who were stationed to keep guard considering the strategic location of the area.

It could however not be ascertained whether the youths were supporters of the Peoples Democratic Party and Bauchi State Governor-elect or overzealous youths.

But in a swift reaction to the development, the Director of Administration, Kaura 2019 and Spokesperson of Senator Bala Mohammed, Maigari Mohammed Khanna, disowned the perpetrators of acts saying that “the aim of those youths is not to celebrate victory but to cause chaos and mayhem where innocent people will be hurt.”

According to him, the hoodlums who “disguised as PDP boys are bent on destroying opponents’ properties in the celebration of the victory of PDP. The incoming administration of Senator Bala Mohammed Kaura does not support and will not associate itself with vandalism and breakdown of law and order.

“It would be recalled that we ran a campaign throughout Bauchi State without any rancour; thus, people appreciate our stand. Therefore, at this time and point in our collective efforts to build Bauchi State, we cannot tolerate lawlessness and destruction of peoples property.”

Maigari Khanna said: “While we ask our teeming supporters and well-wishers to celebrate this victory, we are at the same time, warning anybody who wants to foment trouble to desist from doing so, because the full wrath of the law will descend on them without regret. Peace and harmony are the cardinal objectives of our government a.”