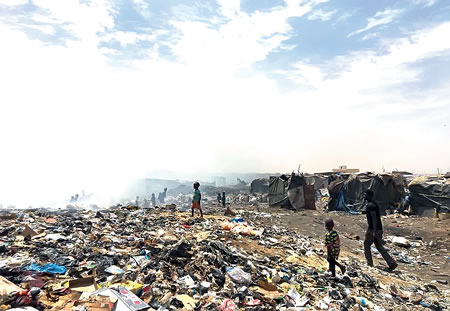 Alassane Dicko used to lead his cattle each day through the grasslands of central Mali until gunmen burned down his village and took all his animals. Now he lives on the edge of a landfill in the capital, Bamako.

Dicko, 38, is one of hundreds of ethnic Fulanis who fled their homes in recent months because of violent disputes over land and water, pitting herders against crop farmers and hunters. Such communal conflict in Mali and other West African nations is being stoked by a toxic combination of climate change, population growth and state neglect and exploited by Islamist insurgencies, which have drawn the intervention of French and United Nations troops.

“Everything was burned; there was nothing left,” Dicko said in an interview at the Bamako camp. “I lost everything including my cattle.”

Tit-for-tat attacks between farmers and herders, who are predominantly Fulani, or Peul, their name in French-speaking West Africa, date back generations. But the scale of the recent violence is unprecedented, and there are fears that it’s spreading to Burkina Faso and Niger.

In Nigeria, the herder-farmer conflict claimed about 2,000 lives last year, according to Amnesty International, more than the number who died in the war against Islamist militants in the northeast.

“You have a struggle over access to resources combined with an ethnic dimension,” said Rinaldo Depagne, West Africa director at the International Crisis Group. “This is where the jihadists’ strategy, which is based on exploiting disorder and a lack of state presence, justice and security, comes in.”

Mali has been engulfed in conflict since a loose alliance of ethnic Tuareg separatists and Islamist fighters with ties to Algeria and Libya seized large swathes of the north in 2012.

A French military intervention succeeded in pushing back the insurgents a year later, but al-Qaeda-linked militants are now encroaching on Mali’s more densely populated central region and increasing tension between local communities.

Historical prejudices against Fulani herders, who are often treated as second-class citizens, have made it relatively easy for Islamist militants to recruit young men from the community, said Brema Ely Dicko, head of the socio-anthropology department of the Faculty of Human Sciences and Education at the University of Bamako. The Fulani are widely dispersed across West Africa and believed to number almost 40 million people.

Forces that ensured victory for Dapo Abiodun’s APC in Ogun

“Islamist militants tap into local grievances, weak state presence and long-running ethnic tensions to extend their influence,” he said. “Some herder communities have joined the jihadist cause over access to land or perceived state abuse.”

One of the home-grown Islamist groups that swelled its ranks with Fulani fighters is led by Amadou Koufa, a preacher who was believed to have been killed by French special forces until he surfaced in a video this year. He’s also a senior member of the al-Qaeda affiliated Group for the Support of Islam and Muslims, which the government holds responsible for a raid on a military base last weekend that left 23 soldiers dead.

The recruitment of Fulani and the fear of jihadists attacks prompted the Bambara and Dogon, who mainly earn an income from farming, to set up their own militia, which often include traditional hunters.

New York-based Human Rights Watch documented 26 attacks against Fulani villages last year, in which 156 people died. The raids were mostly perpetrated by Bambara and Dogon militias in apparent retaliation for killings of community members by jihadists. In all, the violence claimed 202 lives in central Mali.

Government soldiers have also been involved in torture and mass executions of Fulani in the central Mopti region, according to Human Rights Watch and the International Federation for Human Rights Abuses. Mali’s army has suffered heavily from jihadist attacks, with dozens of troops killed this year alone.

Army spokesman Diaran Kone has repeatedly said the abuses against civilians aren’t systemic, and some soldiers were suspended last year over suspected involvement in the killing of 12 civilians.

“The hunters and the soldiers attack the Fulani because they think we’re jihadists,” Alassane Dicko said. “The jihadists also attack us because we don’t support them.”

Mali’s government has pledged to promote development to cut the number of those recruited by Islamist militants and deploy more soldiers in the region. The office of the prosecutor of Mopti’s High Court is investigating several incidents related to communal violence including attacks, cattle theft and arms trafficking, according to a spokesman.

Mamadou Diakite, who also lives on the landfill, believes the government favors farmers over pastoralists — a common view among the Fulani.

“The authorities have done nothing to find a solution,” he said.