You are here
Home > Boma Goodhead > It wasn’t about me but Nigeria, says female rep who dared DSS 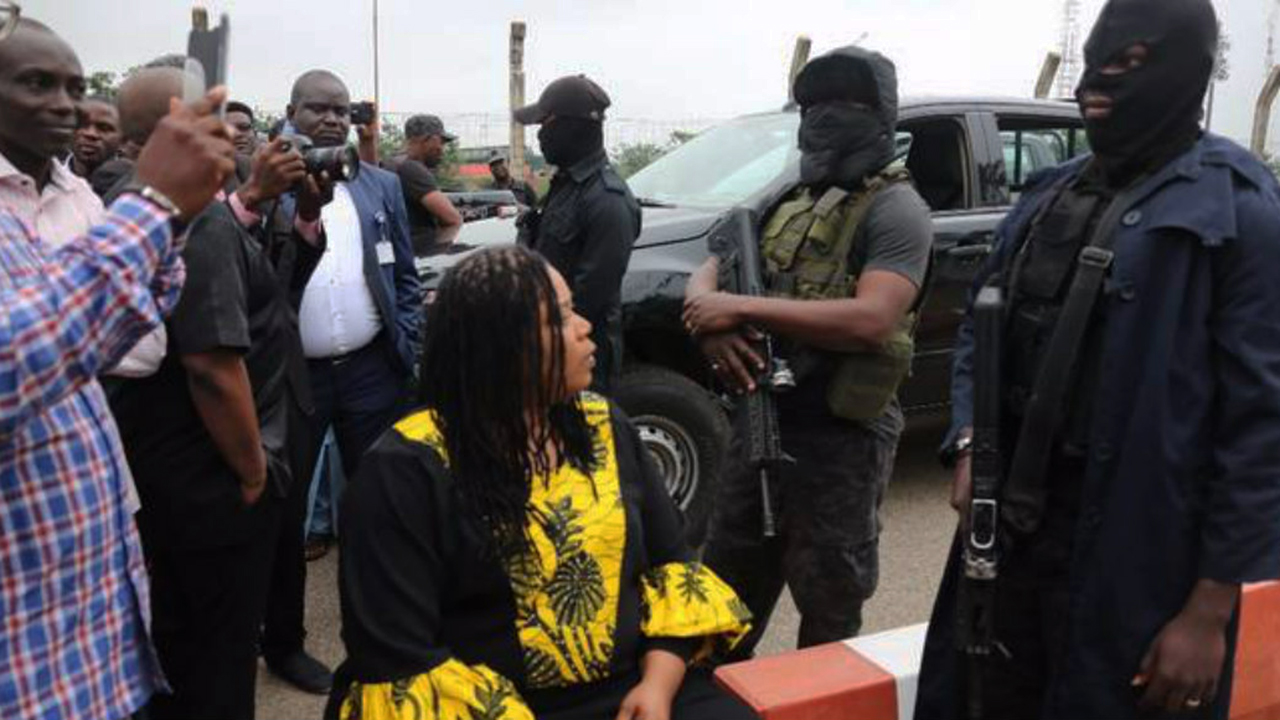 Hon. Boma Godhead, legislator representing Asari Toru/AkukuToru Federal Constituency confronts DSS and dares them to shoot her as they resist her from gaining access into her office at the National Assembly.<br />Photo: qed

She looked every inch the woman who could withstand a bullet as she dared heavily armed hooded operatives of the Department of State Services (DSS) who invaded the National Assembly complex in Abuja to “start shooting” her and the rest of the lawmakers.

‘How many people can you shoot down here, how many?” she screamed.

“ I will tell you the truth that it wasn’t about me.

It was about Nigeria that we have to fight for democracy. It was not about Boma Goodhead.

There were a lot of us out there yesterday (Tuesday) but someone has to take the lead. So, it wasn’t just about me. It was about Nigeria. “

Yesterday, Senate President Abubakar Bukola Saraki singled her out for special recognition over her heroic deed during the siege placing her life on the line as she dared the DSS operatives to

shoot. As if she was incensed by their silence, the female legislator kept moving towards the hooded muscular men of the DSS, shouting: “I dare you to shoot, shoot me.

How can you come here and be embarrassing us? Was this what Jonathan did to Buhari? You are all a disgrace.”

Unknown to many, the female lawmaker is the younger sister of the founder of the Niger Delta Volunteer Force (NDVF), Asari Dokubo.

Goodhead threw caution to the wind as early as 7.30 am on Tuesday when the masked armed operatives of the DSS blocked her colleagues in the House, including senators, from gaining access to the National Assembly Complex to abort a purported move to impeach the Senate president.

She beckoned at some of the senators who were visibly afraid to join her after she had forced her way through the barricade mounted by the security operatives.

Prior to the incident, Goodhead had, penultimate week, given reporters covering the House an inkling of how combative she could be when provoked.

It was when the 37 members of the All Progressives Congress (APC) in the House defected to the PDP that she had a shouting match with Mr. Munir Baba Dan Agundi from Kano State over his fruitless effort to encourage some of the defectors to retrace their steps.

It took the intervention of the Speaker of the House, Yakubu Dogara and some of her colleagues to convince Goodhead to let the matter lie low.

Asked what prompted her to confront the DSS operatives even at the risk of her life, she said: “When I saw what was going on, I just felt that it was very, very undemocratic and provocative because you cannot just come to someone’s house or office and say you would not allow him entrance to their property or office where he works, especially when I saw them (security agents) in masks.

“So that was what made me to react that way.

In fact it was an anger within me that spurred me to action. I said no! Enough is enough! We cannot continue in this manner.

The executive has continued to abuse all the democratic processes. That was what propped up that in me.

She was born in 1970 and hails from Buguma city in Asari Toru Local Government Area of Rivers State.

Before her election as a member of the House of Representatives, under the PDP, she had on three occasions contested elections to represent her constituency in the Rivers State House of Assembly and lost in all.

Ms. Goodhead, a graduate of the University of Port Harcourt, had in 2015, contested for a seat in the House of Representatives to represent her constituency and won.

It is widely speculated in her constituency that she got the slot owing to the influence of her brother, Asari Dokubo, who was very supportive of the President Goodluck Jonathan administration and the incumbent state government.

A product of Niger Delta struggle: ‘It runs in the family blood’

PRIOR to this time, she followed a lot of Ijaw Youth Council (IYC) activities, especially when Dokubo was the organisation’s president, until his detention and subsequent release by President Umaru Yar Adua in June 2007.

When her elder brother was arrested by the Federal Government between 2006 and 2007, she became actively involved in the activities and struggle to free him.

Her audacious confrontation with the security operatives at the National Assembly was not the first of such.

Once, when Asari Dokubo was arraigned in Abuja during his incarceration, Boma had confronted DSS operatives who brought him to court.

A source close to her told The Guardian that she fiercely resisted the security operatives taking her brother back to jail.

IYC president, Eric Omare, who is close to the lawmaker, told The Guardian that he was not surprised that she audaciously resisted the masked security operatives.

“What she demonstrated on Tuesday runs in the family blood.

During one of the trial days of the former IYC president, Asari Dokubo, she also confronted security forces over his unjust detention. She is somebody that does not keep quiet in the face of oppression.

“I was not surprised about what she did, having known her and her family background.

In spite of the fact that she had demonstrated this in the past before, Tuesday was a special occasion in the sense that she confronted tyranny and tyranny succumbed to the superior will of the people.

For her to demonstrate such boldness, the IYC is very proud of her. She is a product of the Niger Delta struggle,” he said.