You are here
Home > Eagles > Karembeu: Eagles have a bright chance in Russia 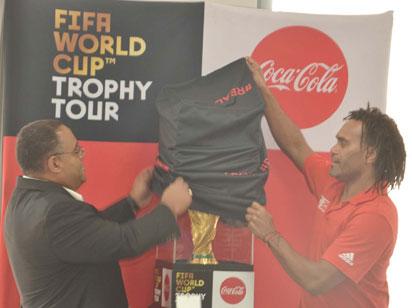 A select number of football fans, invited randomly by the BBC were present and they made a meal of it.
After explaining why the trophy was in Nigeria, Kerembu reiterated that the Super Eagles were capable of causing a major upset in Russia. “Nigeria has a quality team. It showed during the qualifiers as they were the first to qualify from Africa.”
Although Nigeria and France are not in the same group, the likelihood of the two teams clashing should they qualify from their various groups is high.

If Nigeria finishes second in her group and France tops her group it is certain the two teams will meet in the second round. The question was put to the former France international, “which country will win should the two meet?”

He was diplomatic. “I think the field would decide. But I believe strongly that Nigeria has a strong team. Benzema is not playing, Giroud is not playing at his top form at the moment. But we have Griezman, Pogba and others.

“The Nigerian team is complete and Coach Rohr knows all the France squad which could serve as an advantage to Nigeria,” Kerembu said.

He said Africa had a bright chance of doing well in Russia because the game is no respecter of big names. “Football is
developing globally. With Nigeria, Africa can do very well in Russia. I was pained when Ghana missed the opportunity of progressing to the semi final in 2010. All Africa need is those little details when it matters most.”

The post Karembeu: Eagles have a bright chance in Russia appeared first on Vanguard News.