ABUJA—The Senate,  yesterday, concurred with the House of Representatives when it summoned President Muhammadu Buhari to appear before a joint session of the National Assembly to address it on the spate of killings in the country. 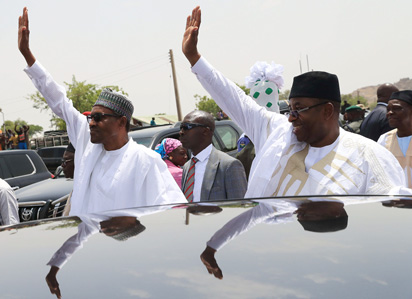 This came on a day suspected herdsmen in the early hours of yesterday, again, invaded African Church, Mbamondo Ukemberagya in Logo Local Government Area of Benue State, killing seven persons, who were taking refuge in the church after being displaced by the raging herdsmen crisis in the area.

The Senate resolution was upon the outpouring of emotions at the latest killings in Benue State in the last three days.

Responding to the resolution yesterday, presidential spokesman, Femi Adesina, said it was democracy in action and that the President would respond to the summons officially.

Senate President, Bukola Saraki, who presided at the session, said the Senate leadership would meet with its House counterpart to fix an appropriate date and time for the President to appear and intimate the National Assembly on the security challenges in the country, even as a minute silence was observed by the Senate in honour of the dead yesterday.

The Senate summons on President Buhari came in the wake of a motion moved by Senator George Akume (APC, Benue North-West), in reaction to the killings.

Arguments for the declaration of a state of emergency in Benue State was put down by Saraki who urged canvassers of such to await the briefing by the President.

In his presentation, Akume expressed concern that despite military presence in the state, killings and destruction of properties continued unabated.

He said: “In the morning of Tuesday, April 24, while some Christian faithful were gathered at St. Ignatius Catholic Church in Ayar town in Gwer East Local Government Area, they were ambushed by gunmen.

“They opened fire indiscriminately on the worshippers, resulting in the death of two reverend fathers, a catechist, and 17 others.

“This latest attack on a worship centre, which is unprecedented, has grave implications for the security and unity of our dear nation.

“The monumental refugee situation, now estimated at over 200,000, is being faced by the entire state.”

In his contribution, Senator Yusuf Abubakar Yusuf (APC, Taraba Central), said:  “If you have weak laws, you will have weak interpretations.”

On his part, Senator Gbolahan Dada (APC, Ogun West), who called for a state of emergency in the troubled state, said:  “I rise with a saddened heart where senseless killings of over 2,000 Nigerians have occurred across the nation. I request the Senate to pay visits to states affected, with Benue State as the first.”

Senator Rabiu Kwankwaso (APC, Kano Central), said: “This is the time to look into the killings in so many states. This shows that our security agencies need to work very hard to put an end to the senseless killings.”

Senator Mao Ohuabunwa (PDP, Abia North), who supported the declaration of a state of emergency in Benue State, said: ”We need to declare state of emergency for the military to go in and put an end to these killings of human beings.”

On his part, Senator Isa Hamman Misau (APC, Bauchi Central), said:  “We are running short of ideas to solve this problem. We need fresh minds with fresh ideas to fix this.”

Senator Victor Umeh (APGA, Anambra  Central), who supported the call for a state of emergency, said that “killings like these cause the country to become polarized. The Tuesday killings call for more drastic action. The military should be directed to go to Benue and find those killers.”

Senator Adamu Aliero (APC, Kebbi) said: “What happened in Benue, Nasarawa, Zamfara, and even Taraba can happen anywhere. We should not only pass motions but also make sure action is taken.

“The killing of these religious leaders could cause a religious crisis in the country and must be tackled. These killers have no religion.”

Contributing, Senator Binta Masi Garba, APC, Adamawa, said: “We should not be sentimental when it comes to such situations. We must take a holistic approach to this issue. Many states in Nigeria are border states. We need to find out what the Immigration is doing about this matter in these states. We all have a responsibility to tackle this, irrespective of our geo-political zones.”

Senator Jeremiah Useni (PDP, Plateau) said: “The way we are handling this matter will not bring an end to it. It is high time a specific time period is given for security agencies to start doing their jobs. Anyone found doing otherwise should be dismissed.”

Senator Samuel Anyanwu (PDP, Imo East) who also supported the declaration of state of emergency said: “It is important to engage service chiefs in the killings of these innocent people. I want to believe that some people are gaining from this herdsmen issue across the country. It is a fragile situation.”

For Senator Obinna Ogba (PDP, Ebonyi), he said:  “Whatever the President says is what we should take as the final say. We cannot continue like this. More protection laws need to be passed.”

Rounding up the debate, Senator Saraki said: “We all know that the dimension it is taking can lead to a serious crisis in this country. It means that we need drastic action. We must say “No.” These daily killings have to stop.”

Meanwhile, suspected herdsmen in the early hours of yesterday invaded  African Church, Mbamondo Ukemberagya in Logo Local Government Area of Benue State, killing seven persons who were taking refuge in the church after being displaced by the raging herdsmen crisis in the area.

The attack came despite the outcry and condemnation that trailed the killing of two Catholic priests and 17 worshippers at Mbalom Catholic Church in Gwer East Local government area of the state.

Vanguard gathered from a source in the area that the victims who were mostly women and children, were all killed in their sleep.

The source said: “The militant herdsmen arrived Mondo settlement about 1am and started shooting sporadically at displaced persons who were asleep in the church, which also has a primary school building.

“Seven people were confirmed killed, among them, men, women and children. Many sustained injuries, others are still missing.

“The attackers also burnt several houses and farmland. As we speak, the entire area has been deserted.

“After invading the church and community, the attackers proceeded to Zaki Biam/ Wukari road where they mounted a road block and began to snatch motorcycles and valuables from unsuspecting travellers.”

Confirming the incident, Logo Local Government Council Chairman, Richard Nyajor, said seven bodies had been recovered from the scene of the attack.

He said: “They killed seven in the place, they were the villagers who were displaced because in that place, you have Internally Displaced Persons, IDPs, everywhere and they are too many.

“The place is not a government recognized IDP camp because we have many displaced persons in that community.

“So far, we have recovered seven bodies and many were injured and we are still to account for many people, so, the casualty figure may still rise.

All attempts to get a confirmation from Benue State Police Command failed as calls put to the phone of the Commissioner of Police, Fatai Owoseni, and text messages were not responded to.

Meanwhile, the Catholic Church in the state has scheduled a mass burial for the two priests and 17 worshippers killed last Tuesday at St. Ignatius Catholic Church, Ukpor-Mbalom.

In a statement released yesterday by the Chancellor of Makurdi Catholic Dioceses, Rev. Fr. Jude Ortese, the victims would be buried on May 22, 2018.

The statement read:  “The Catholic Bishop of Makurdi, Most Revd. Wilfred Anagbe, has approved that the two priests and lay faithful who were murdered by militia during morning mass in the early hours of Tuesday, April 24, 2018, at St Ignatius Quasi-Parish, Mbalom, be buried together as a testimony of eternal communion on May 22, 2018.

Worried by the ceaseless killings in the state, Benue State House of Assembly has summoned Governor Samuel Ortom to explain and brief the Assembly on the on-going bloodbath in the state.

In a statement by the Chief Press Secretary to Speaker of the House, Mr. Bem Abunde, the governor was requested to also brief the House on actions taken by the State Security Council to halt the incessant killings of Benue people by militant herdsmen.

Reacting to the latest killings in the state, Governor Samuel Ortom again restated his call on the people of the state to defend themselves.

The governor, who cut short his annual leave to take full charge of the state, in a statement through his Media Adviser, Tahav Agerzua, also condoled with the Church and people of the state over the killings.

“He called on the people of the state to be prepared to defend themselves and their land because the state is under siege and that they have no other place to run to.”

Don’t play into the hands of agents of disunity —Presidency

Reacting to the killings in Benue last night, the Presidency in a statement by the Senior Special Assistant to the President, Garba Shehu, said: “Repeated acts of mass killings and destruction in parts of the country and Benue State in particular, point to the evil design of enemies of peace and unity who have desperately been trying to bring the country to this sorry point- a brother killing brother, a neighbor killing a neighbor and a community attacking and killing members of another community.

“The President strongly warns citizens against playing into the hands of the agents of disunity.

“President Buhari says those behind the church attack that left 18 people dead, including two Priests, did not mean well for Nigeria and peaceful coexistence.”