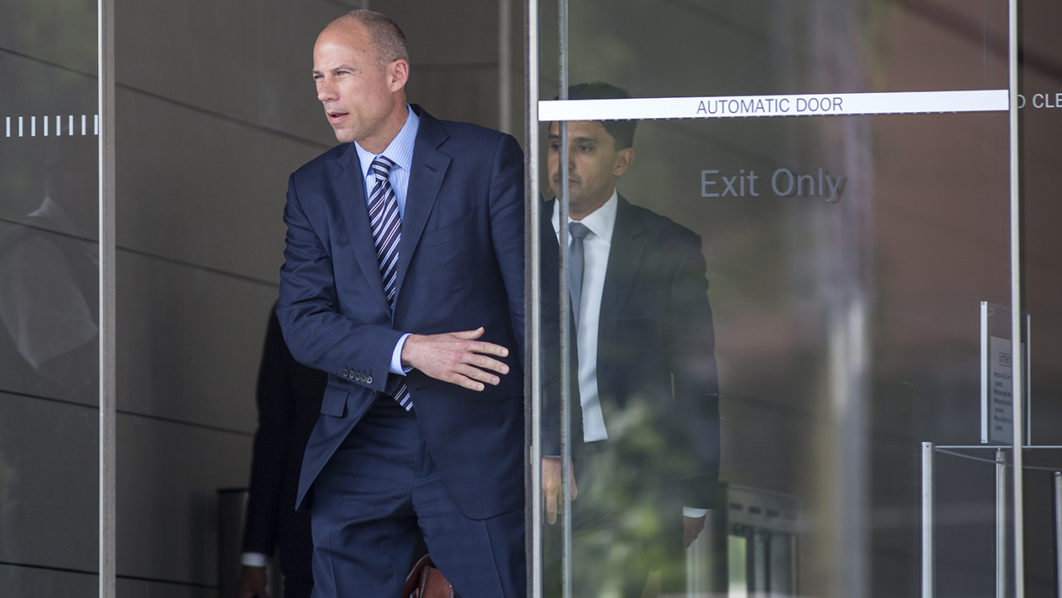 LOS ANGELES, CA – JULY 27: Attorney Michael Avenatti, who represents adult film actress Stormy Daniels, walks from the courthouse during a break in a motions hearing on July 27, 2018 in Los Angeles, California. Daniels, whose real name is Stephanie Clifford, is suing President Donald Trump and his former personal attorney, Michael Cohen, claiming that she was defamed and campaign finance law was violated by brokering a non-disclosure pact just before the 2016 presidential election. Avenatti maintains that the agreement is invalid because Trump did not sign it. David McNew/Getty Images/AFP

“Time for Michael Cohen and Donald Trump to come 100 percent clean with the American people,” Michael Avenatti tweeted in a reference to Trump’s former personal attorney.

“All the documents, all the tapes. NOW,” Avenatti added. “No more lies or lip service.”

The attorney, speaking to reporters late Thursday in Los Angeles, said the three women “were paid hush money prior to the 2016 election.”

Daniels, whose real name is Stephanie Clifford, is suing Trump to invalidate a non-disclosure agreement that prevents her from discussing their alleged intimate relationship that began in 2006.

Cohen, Trump’s attorney, paid Daniels $130,000 just days before the presidential election in exchange for her silence.

A recording surfaced this week of Trump and Cohen discussing how to buy the rights to the story of another woman, a Playboy model who claims she had an affair with Trump in 2006 as well.

Cohen, who no longer works for Trump, is under investigation in New York for his business dealings and reportedly whether hush payments violated campaign finance laws.

The tape involves Karen McDougal, a former Playboy model who says she had a monthslong fling with Trump after they met 12 years ago.

On the tape, Trump and Cohen talk about buying the rights to McDougal’s story, which she had sold to the National Enquirer for $150,000. The tabloid never published the story.

– ‘Cover-up’ –
Cohen, meanwhile, is asking a federal judge in Los Angeles to consider a gag order against Avenatti, and to grant Cohen another 90-day delay in proceedings in Daniels’s lawsuit.

US District Judge S. James Otero heard arguments in the case but made no immediate ruling, and gave no indication of when he might announce his decision.

“We are confident, based on his statements, that the efforts by the president of the United States and Michael Cohen to silence me and prevent me from presenting the truth and evidence to the American people, that those efforts are going to fail as they should,” Avenatti said after the hearing.

Cohen’s lawyer, Brent H. Blakely, argues that a restraining order is necessary because Avenatti has appeared more than 170 times on television and posted over 500 tweets smearing Cohen in order to litigate his case “in the court of public opinion,” according to documents filed in the case.

Otero ordered a three-month stay of the case in April in light of a federal criminal investigation of Cohen.

The lawsuit also accuses Cohen of defamation over comments he made about Daniels’s truthfulness.

Daniels filed a separate defamation suit against Trump in New York, alleging the president libeled her by saying she lied about a man she claims threatened her to force her to keep quiet about the alleged affair with Trump.

“I think there’s a reason why the press and the media continue to invite us to come on television and talk about this case,” Avenatti added.

“And that is because there’s a significant interest, and there should be, because this is about a cover-up at the highest level of our government, which is always an incredibly important thing in the United States.”