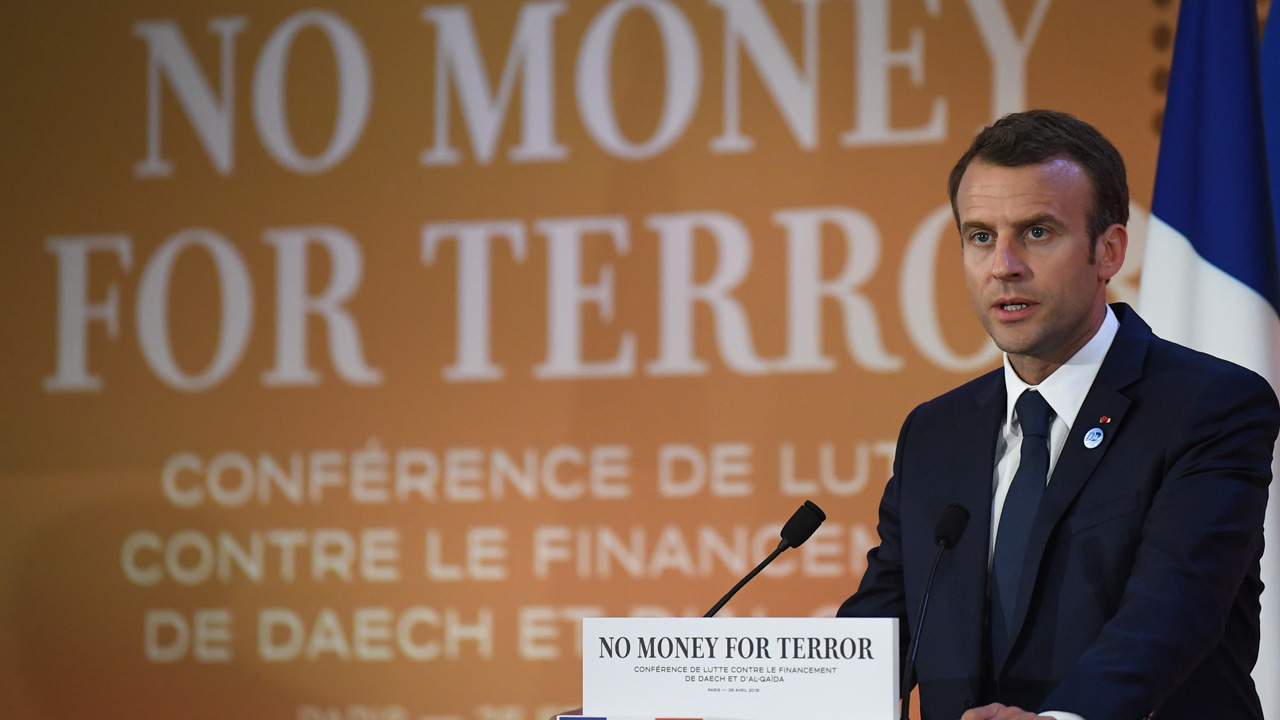 French President Emmanuel Macron gives a speech during the first day of a two-day conference on combating the financing of terror groups on April 26, 2018 at the Organisation for Economic Co-operation and Development (OECD) in Paris, bringing together around 80 ministers and 500 experts. French authorities have identified 416 people who gave money to the Islamic State (IS) group, France’s top anti-terror prosecutor said on April 26. Eric FEFERBERG / AFP / POOL

French President Emmanuel Macron on Thursday called for more cooperation to deny jihadist movements the financing they need to carry out attacks, as dozens of ministers met to discuss how to cut off funds for extremists.

France’s top anti-terror prosecutor, Francois Molins, had revealed earlier that the country’s security services had identified 416 French donors to the Islamic State (IS) group and had also detected 320 fundraisers mainly based in Turkey and Libya who transferred the money to the jihadists.

Macron warned that the jihadists “use all contemporary forms of financing” in an address at the closing of a two-day conference on combating the funding of terror groups at the Organization for Economic Cooperation and Development (OECD), which brought together around 80 ministers and 500 experts.

“We have to cut off terrorism at its roots: it feeds on human trafficking, drugs and weapons. There’s always an underlying economy,” said Macron, urging global “transparency and mobilisation.”

“We have to cross to a new stage in the fight against Daech (Arabic acronym for IS) and Al-Qaeda.”

Macron praised the “No money for terror conference” for committing to improving such measures as sharing intelligence, fighting against anonymous financial transactions and identifying sources of funding.

Attacks on Western targets have become increasingly low-cost since the 9/11 atrocities in the United States in 2001, particularly in recent years when IS followers have often used only vehicles or automatic weapons to kill people.

But Molins estimated that attacks in France in January 2015 targeting the Charlie Hebdo magazine and a Jewish supermarket would have cost 25,000 euros ($30,000).

More deadly assaults by teams of IS jihadists in Paris in November of that year, including against the Bataclan concert hall, would have cost an estimated 80,000 euros, he said.

A French presidential official briefing journalists ahead of the terror funding conference this week said that IS income was estimated at about one billion dollars (820 million euros) a year between 2014-2016.

Most of this was from local taxation, oil revenues and looting, with far smaller amounts flowing in from overseas donors.

French officials are concerned that the money has been transferred out of Syria and Iraq and could be used to rebuild the organisation.

“It has been moved since, at least in part. It’s probably somewhere,” the official said on condition of anonymity. “These groups are very skilful in using sophisticated techniques to move financial resources around.”